The laziest and slowest record in endurance-sports history has been broken. Again. By me. Again.

As documented in numerous essays, I started hiking the Superior Hiking Trail on Sept. 23, 2000 and finished the 310-mile trek from the Canadian border to Jay Cooke State Park on Nov. 5, 2015. Obviously I took a lot of breaks along the way. Then, in 2016, I hiked new parts of the trail that hadn’t been built when I first went through, thus breaking the record I already held for the slowest unsustained complete traverse of the Superior Hiking Trail.

Was that an official record? Well, no organizational body really keeps track of such things. But I stand firmly in my declaration that no one who has hiked the entire Superior Hiking Trail has taken longer to do it than me.

And now I’ve taken even longer.

In the summer of 2018 a new loop trail was built at Ely’s Peak in Duluth. It was kind of late in the hiking season when I heard about it, so I planned to do it in 2019. Then I kind of forgot about it and got distracted with other things. I had also started a new quest to hike the North Country Trail through Wisconsin. I’m still barely started on that.

Anyway, this past July I drove out to the Ely’s Peak area with the intention of knocking out the new last bit of trail, but as I started walking it occurred to me that if I waited until Sept. 23 to do this loop my Superior Hiking Trail story would span a perfect 20 years. So I hiked other trials that day and saved the loop for the perfect day.

And it was a perfect day. It seemed like the fall colors season launched in the moments while I was beginning my hike. 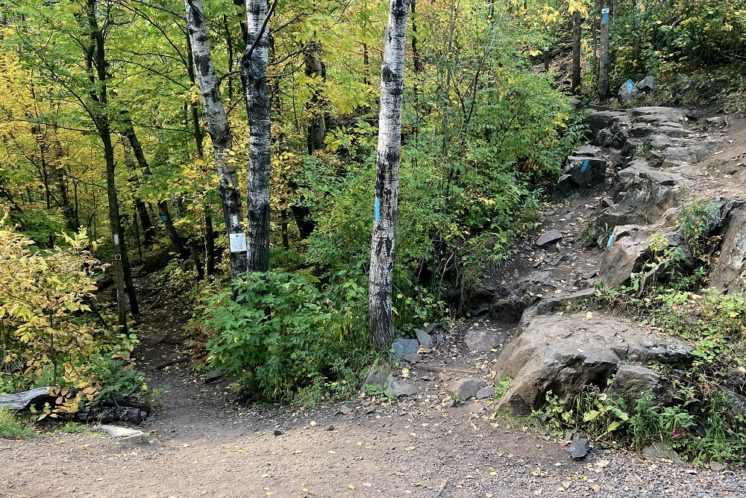 The 1.7-mile loop starts and ends at two different places along the main Superior Hiking Trail route. The most common point of entry — and the place I chose to start — was off the Willard Munger State Trail, where two SHT paths go in different directions. The path to the right is the main trail; the path to the left is the section built in 2018 to create a loop. Obviously the loop can be taken in either direction or from the other end of the loop, but the other end requires a longer hike to get to the starting point. 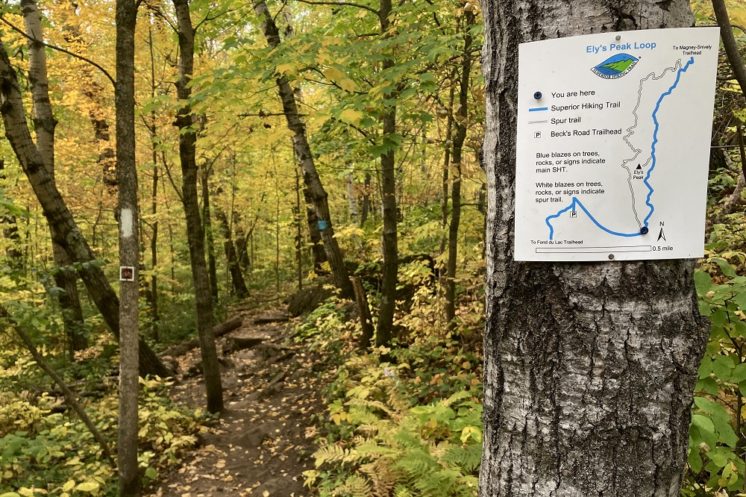 The new section of trail crosses the Duluth Traverse multi-use trail a few times and it can be a little confusing trying to stay on the hiking trail. I wandered off onto the Traverse twice, but it didn’t take long to realize my mistakes and track back to my intended route.

About halfway through my hike I reached the spot where the loop joins the main hiking trail. I marched on with zero fanfare, not realizing that technically that was the spot where I finished my 20-year hike. The rest of the loop is trail I have already completed. Oh, well. I’ve already celebrated finishing the SHT twice. The third time probably won’t even be the last. I fully expect someone will comment on this post and inform me there is already another new segment I never heard about.

The view from the top of Ely’s Peak wasn’t new to me — I’ve been there countless times — but it might have been at its best on this hike. The scenes in all directions were similar to hiking near the Canadian border, but now I was on the edge of the city. And that, of course, is why people love Duluth. Easy access to recreation, seclusion and natural beauty, easy access to arts, human interaction and material goods. Duluth is about as close to the best of both worlds as it gets.

On this particular day, however, the trail wasn’t as secluded as I’m used to. There are times a person can hike there and not see a soul. On this hike I crossed paths with a few groups of people, and occasionally would hear expressions like “Oh pretty!” and “I haven’t been up here since I was 8 years old.”

I’ve stood at the peak many times by myself, but this time there were more than a dozen people mingling around the boulder at the top that provides just a few feet of added elevation. I had the boulder to myself for about 30 seconds before some kids joined me, ending my very brief reign as King of the Hill. 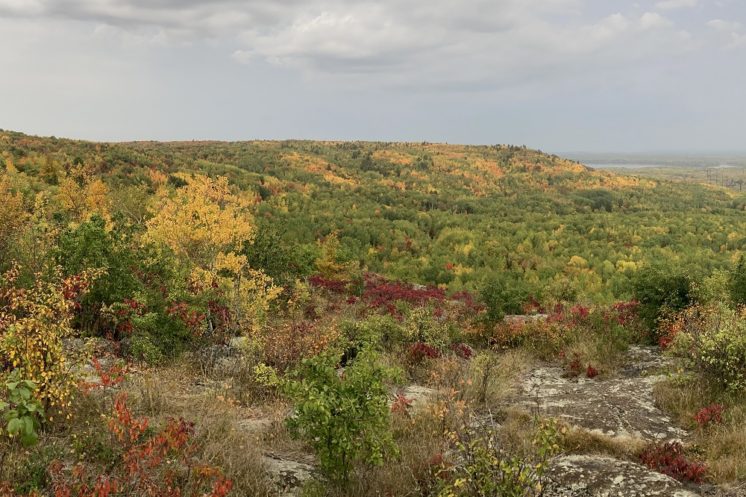 On my way down the trail I crossed a group that included a teenage girl lagging behind. She asked me how far it was to the top.

“It’s not far, but it’s all up hill,” I told her. About ten seconds later I heard her expressing her discontent to the rest of her group.

It is kind of a steep climb, but I’m sure she survived.

I have noted a few deaths in my series of Superior Hiking Trail essays, but none of them involved physical exhaustion from hiking. My worst case of getting lost on the trail happened when I hiked the Lake County Road 301 / Castle Danger area right after leaving a funeral. And I’ve shared the trail with two different dogs whose lifespans didn’t reach the number of years it took me to complete my milestones.

My Ely’s Peak Loop hike happened in between my mother’s death and her funeral. Overlooks are fantastic places for reflection. If you’ve ever been to the Grand Canyon you know the feeling of standing on the edge and being smacked with a sense of your place in the world. That happens at Ely’s Peak, too.

They were in year 45 of a 64-year marriage, and they looked at each other the same way all 64 years. 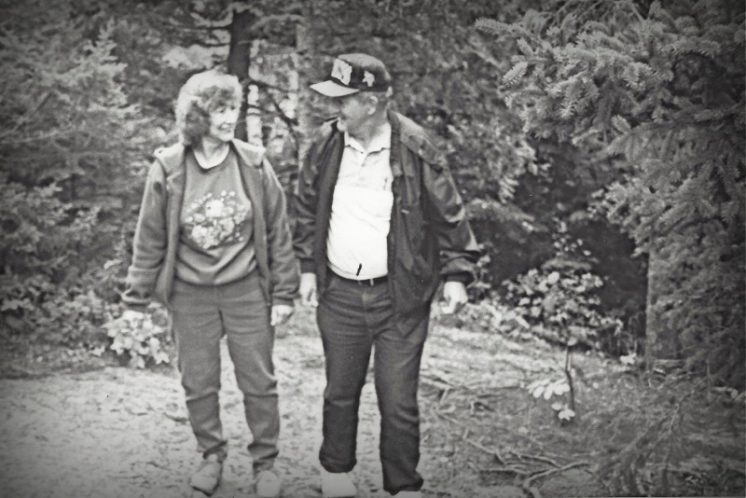