In the fall of 2008 I resumed my north-to-south march on the Superior Hiking Trail at Finland Recreation Center. I was dropped off in the early evening, with just a 2.5-mile hike to Leskinen Creek Campsite. When I arrived I discovered I would have to share the space with a group of young men who were already set up there. Sometimes a person goes off into the wilderness with intentions of being alone, then sleeps 50 feet from snickering 20-year-olds.

This was one of only two times I shared a backwoods campsite during my SHT trips, and the only time I shared one with a group of people. My mostly solitary experiences were probably not typical, however, because I tended to hike late in the season — usually the tail end of September but sometimes well into October. On this trip I arrived at camp on Aug. 16, which was by far the earliest I had started an SHT trip. It was still summer. Still T-shirt and shorts season. The last grasp of summer for those attending school in September.

I introduced myself to the neighbors and spent a little time with them at their fire. I don’t recall much about them eight years later. I want to say they were from Hermantown. One was named Andy and another was Dan. I think there were three of them in total. They were nice guys. That’s about all I remember.

In the morning I was packed up and on the trail before anyone else at camp had so much as crawled out of a tent. The first landmark on my hike was a large boulder, or “glacial erratic,” and I think it was just after that where I ran into a good stretch of raspberries along the trail. When I reached Sawmill Pond I saw there was a trailside box with a log book in it, so I left a message for the guys from camp. As a smartass, I couldn’t resist writing something to the effect of: “Hi guys. Lots of delicious raspberries on the trail. Sorry I ate them all, but not really that sorry.” At Sawmill Pond I thought about pumping some water through my filter, but I hadn’t consumed much yet and figured it would be better to pump from moving water in a creek later than from the murky water in the still pond when I had a full bottle anyway. That turned out to be a mistake.

If you recall from an earlier essay, I was too foolish to bring a purifier with me on my first outing and quickly ran out of water. On this trip I had a purifier, but didn’t realize once I’d passed Sawmill Pond all of the creeks I’d cross the rest of the day would be dried up. There would be no water for the next ten miles.

The hike that day was full of beautiful ridgelines and overlooks. First was “Section 13,” a steep cliff frequented by rock climbers. Then came Sawmill Dome and Fantasia Overlook. I hiked 14 miles up and down hillsides that day, so the last of my water was gone quickly. I crossed numerous wood bridges over creeks that looked like they’d been dry since the dinosaur age. When I finally reached the falls at Baptism River, I thought it might be a mirage. 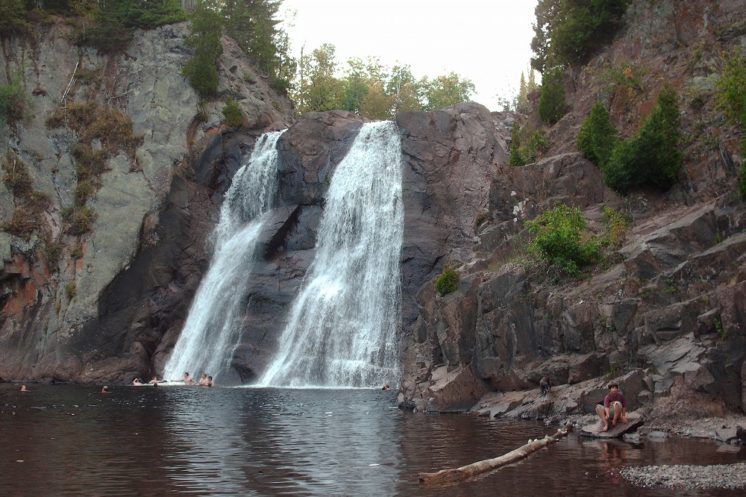 I probably spent an hour swimming below the falls and quenching my thirst. Then it was time to hike into Tetteguche State Park and reserve a camping site. One small challenge: Tetteguche is arranged around the notion that most campers show up in vehicles. So in order to check in and pay for a site I had to go on a one-mile walk down a winding road, then walk the same mile back. This is not a major ordeal, but since I’d been hiking all day the extra two miles for a simple errand was feeling like a hassle. Fortunately, a short distance into the way a car came ripping up the road and, as luck would have it, the boys from Leskinen Creek had passed me on the trail, met family members at the campground and were out getting ice. They offered to chauffeur me to the ranger station, and I accepted.

They also invited me to their campsite for hot food, music and dancing around with glow sticks. To hell with solitude, I decided, and joined in the merriment with my young camping buddies and their moms, dads, little sisters and girlfriends. It was quite an evening. The following day I put in 10 miles hiking to Mt. Trudee, Round Mountain, Bear Lake and eventually veering off onto the Twin Lakes Trail into Silver Bay. Along the way I came across another trailside log book, with a message from my camping buddies.

8/17 – Hey Paul! Great time last night! Hope you enjoyed the company, we enjoyed yours. We passed you when you went up Round Mt. Had I kept going I probably would have continued to see those guys twice a day. But it was a Sunday — an easy day to call for a ride home. Silver Bay also seemed like a good place to wait for that ride, but when I made it to town I discovered the Silver Bay Municipal Bar and Lounge closes on the Sabbath. Once again quenching my thirst proved elusive. Jeff Ruprecht is a curious guy who's not afraid to jump into new things. He tells us how he sorts...