The final four of my 16 years on the Superior Hiking Trail were spent filling in a series of gaps, the biggest of which was an 85-mile stretch from Martin Road outside Duluth to Split Rock State Park. I covered nearly three quarters of that distance in 2012 and 2013 through somewhat random day hikes. The 2012 hikes were in areas that are among the most beautiful on the trail. The 2013 hikes were marred by biting flies and scenery that doesn’t quite measure up to better parts of the trail.

When people find out I’ve hiked the entire SHT, they sometimes form a grandiose opinion of my outdoorsmanship and general machismo. Like I’m the kind of guy who walks around with a Leatherman multitool at all times, practically lives off the land and is prepared for Armageddon. In reality, I wouldn’t have slept a single night in the woods on my hiking trips if there were an easier way around it. Once I’d knocked the northernmost 180 miles off my checklist, there was an easier way around it, and I took full advantage of the opportunity to get dropped off at a trailhead and get picked up eightish miles away just a few hours later.

It should also be noted that during my time on the trail, just about every person I ran into who had hiked the entire thing, or was in the process of attempting to do it, turned out to be a skinny elderly man from the Twin Cities with a walking stick. Seriously. I had several conversations with frail-looking white-haired dudes who had set aside a month in order to hike the whole trail for the second time. It really doesn’t take that much grit or muscle compared to how much it relies on finding the time and having a general eagerness to see it all. Although I was to the point of filling in gaps, my 2012 miles were all concentrated into a single trip, much like the early years. The difference was that instead of moving north to south and occasionally camping in the backwoods, I went whatever direction seemed most convenient in order to finish at a large campground or other convenient spot where my wife would be waiting, reading a book or cooking. That’s what’s called the easy life.

So my 2012 hike started in Castle Danger, climbing to the ridgeline and Wolf Rock (photo above), then following the Gooseberry River (photo below) into Gooseberry Falls State Park. At the end of the 10-mile stroll was my cozy hippie van, cold beer, warm food, lovely bride and temperamental Doberman. The next day I was off again, on an eight-mile trek from Gooseberry to the Split Rock Wayside and into the park on a mission to connect with where my 2011 hike ended. The photo above, shot at Bread Loaf Ridge, does not do justice to how orange that tree was. The Split Rock River Valley leads hikers to Lake Superior, then ascends to a rocky cliff high above the vast Great Lake. After a night at Split Rock State Park, I took care to cover a few parts of the trail I’d missed by taking on the six-mile Split Rock River Loop, which featured an interesting bridge. At the tail end of the hike, my support team met me by hiking in the opposite direction and sharing the end of the adventure. The mighty 1993 GMC Vandura then brought us to Grand Marais, where Trampled by Turtles performed for National Public Radio’s Mountain Stage. Development of the final section of trail connecting Duluth to Two Harbors was completed in spring 2013 and that summer I started doing single-day hikes covering parts of that stretch, sometimes with my wife driving separately and parking at the opposite end of a section, but more often by driving one car and simply hiking a few miles in, then hiking back out and covering the rest of the section the same way from the other side. The starting point of the Duluth to Two Harbors section, from the trailhead at Martin Road is cut on the old North Shore State Trail, and a sign there pays tribute to C. J. Ramstad, “Mr. Snowmobiling.” Andrew Slade, editor of the first edition of the Guide to the Superior Hiking Trail, was maybe a week ahead of me in scouting the Duluth to Two Harbors sections. We did end up crossing each other on the trail before the summer ended, however. On his blog he noted the section off Martin Road is more like the “English countryside” than what SHT hikers will be used to … and he’s right. Because some of the path follows a snowmobile trail, the grass is longer than most SHT hikes, but I only picked up one tick out there. Above is a section that someone mowed. The trees out there are mostly aspen, maple and basswood. There are several swampy ponds along the hike. Shortly after crossing these skunk remains, I saw a black bear scampering away — disappearing too fast for my camera. The biting flies were ceaseless that summer. I think I killed about 10 of them per hour. Paisley Pond is a good place to find zombies. Most of my 2013 adventures took place in August and September, but I hit the Sucker River to Fox Farm Road section on Oct. 27 and found part of the trail I had already covered had at some point been logged. Apparently the forest was over mature and in decline, and the timber harvest will help regenerate things. 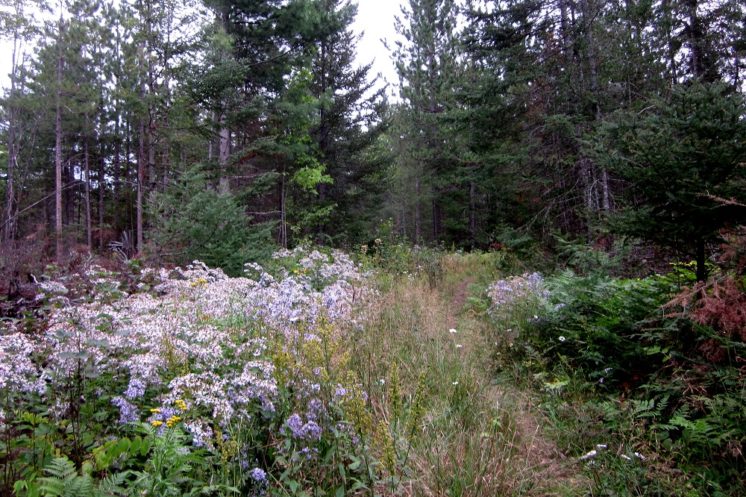 One minute you’re walking through wildflowers, the next minute there’s a snake. I did do one camping trip in 2013 that helped me knock off a couple Two Harbors-area sections — Lake County Demonstration Forest to Reeves Road and then Reeves Road to Lake County Road 301. I skipped the 6.3-mile Castle Danger to Lake County 301 section because the Encampment River Bridge was out. I crossed the Encampment River in 2014, and it led to the single worst misadventure of my 16 years on the trail. Which will be a good topic for part twelve.

Duluth-area musicians interested in performing in the 2017 Homegrown Music Festival must make their intentions known by filling out a...