Photographer Travis Novitsky got up early on Dec. 15 to make the trek up Mt. Josephine to photograph sea smoke on Lake Superior. 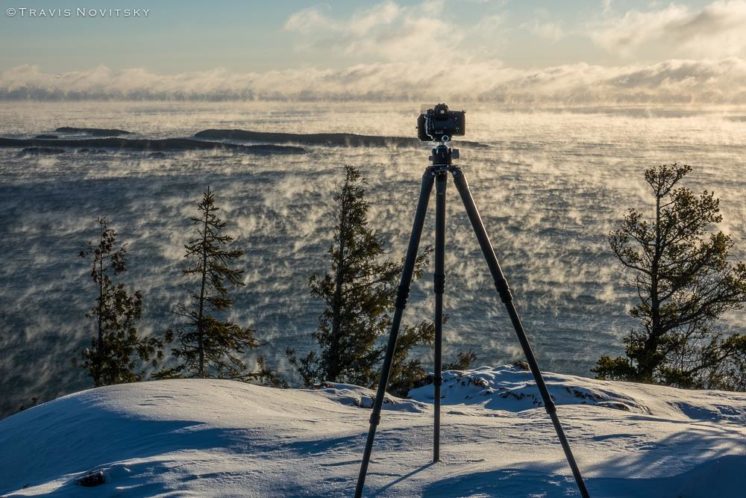 From his video description on Vimeo:

I knew that the high vantage point (the summit is 700 feet in elevation above the lake) would make for excellent viewing of one of Lake Superior’s most fascinating phenomenon. I love the winter and sea smoke is one of the reasons why. As cold arctic air moves in and hits the (comparatively) warm water of Lake Superior, it makes steam that rises off the surface of the lake. Commonly referred to as sea smoke, it makes for a fascinating photographic subject.

All night long the wind blew like crazy. I was hoping it would die down by morning as I really wanted to hike up the mountain but didn’t want to do it in the crazy wind. Thankfully, around 5:00 A.M. the wind did let up considerably. I crawled out of bed at 6:30 and bundled up for the trek up the mountain. On the short drive to the trailhead my car was indicating that the temperature outside was minus 5 degrees Fahrenheit. There was still some wind, but it wasn’t bad. I had a mile of hiking to do with a 700 foot gain in elevation. The trick was to move slow and steady. I didn’t want to get too warm and sweat too much on the way up, because then I would be freezing while I stood on the summit making photographs.

About halfway up the mountain I started get back into the wind. It had been relatively calm down at the start of the trail but as I gained elevation the wind picked up again. By the time I got to the summit it was howling pretty good. Luckily, the wind was mostly at my back as I stood making photographs of the lake. I spent about an hour on the summit making photos and timelapse sequences of the sea smoke as the wind pushed it out across the surface of the lake. I came home with a lot of cool images and enough timelapse sequences to make a nice little video compilation. I had a little bit of a chill the rest of the day after this outing, so going to the hot tub last night at the community center sure felt good!

The final four of my 16 years on the Superior Hiking Trail were spent filling in a series of gaps,...