After hoofing over 90 miles of the northernmost sections of the Superior Hiking Trail in 2000 and 2001, I failed to hike a single SHT mile over the next five years. What went wrong?

Little tiny things, that’s what. In 2002 I was a freelance writer barely making rent. It was hard to turn down work to free up time to go on a hike. One weekend I planned a short trip, but the weather forecast indicated rain and I sissied out.

By 2003 I had made the mistake of accepting a fulltime position in the field of advertising, with no vacation time until after the first year — although I did manage to sneak off for a three-day weekend on Isle Royale.

Frustrated with my inability to get out of town for a good hike, and inspired by a discussion about how Duluth is a geographically wide city, I decided to organize a roughly 26-mile single-day walk from the Wabegon Supper Club in the Superior Township to the Lakeview Castle in Duluth Township. This complete traverse of Duluth was called the Nonchalant Jaunt.

Perfect Duluth Day was launched just three months prior to the 2003 jaunt, so there are a few posts about it in the archives. A group of seven hearty individuals completed the trek, which for the most part followed Highway 23, Superior Street and Highway 61. 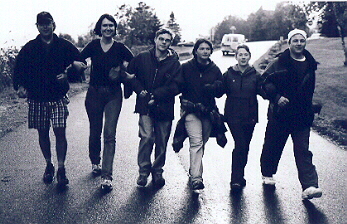 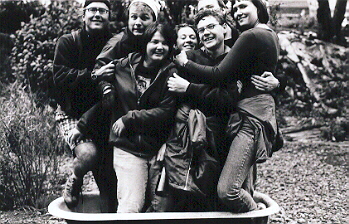 In 2004 I took a different marketing job and started over with zero vacation time. I was also battling fall allergies, something I hadn’t suffered the previous 31 years of my life. Perhaps I was just allergic to marketing. Whatever the case, the Superior Hiking Trail eluded me again.

The original Nonchalant Jaunt inspired another quest to cross the city, however. This time the group took a longer route, following Skyline Parkway from Mission Creek to the end of Occidental Boulevard. Just three jaunters made it all the way; four others got too comfortable at the former Buena Vista Restaurant and never finished. I returned to the fancy free lifestyle of freelance writing in 2005, but once again failed to get my gear in a bag and hit the trail. I was committed to doing all of my northern-section backpacking trips during the fall to avoid swampy trails and insects, so it didn’t take much — a few other plans here and a rainy weekend there — to miss my window of opportunity. A third Nonchalant Jaunt took place in 2005. The Superior Hiking Trail still didn’t cut through Duluth, so we were out of ideas for a new route to cross the city. The group simply met at the top of Enger Tower and engaged in the first truly nonchalant version of the jaunt, choosing to walk in whatever direction we felt like, which brought us through Duluth’s friendly West End, into a furniture store, and out to Graffiti Graveyard and the Central Hillside, along with other stops I can’t remember.

It wasn’t until 2006 that I finally made it back to Temperance River State Park to resume my Superior Hiking Trail quest. That hike will be the subject of next week’s essay.

To conclude my report on the “Nonchalant Years” I’ll note there were three more Nonchalant Jaunts over the next three years — the fabulous digital color photography era. In 2006 the group started at Clyde Avenue Boat Launch, marched west into Morgan Park and the old U.S. Steel site, and ended at Hugo’s Pizza. The 2007 jaunt began at Amazing Grace Bakery & Café. We strolled over to the Lake Superior Marine Museum to watch an inspirational movie about bulk loading iron ore, then spent the rest of the day walking to the end of Minnesota Point and back. The final Nonchalant Jaunt covered the foreign land of Superior. The group met on the end of Wisconsin Point and wandered along the sandbar and off into the city’s eastern neighborhoods, eventually cutting through the north end to Connors Point, all the while taking in such scenic wonders as old ore docks, Indian burial grounds, a bar made out of an old rail car, an old firehouse and police station, someone’s wedding reception, etc. So although I hiked exactly zero miles on the Superior Hiking Trail from 2002 to 2005, I still managed to find ways to enjoy some extreme walking … er, nonchalant jaunting. The terrain doesn’t really matter as much as what happens along the way. Picking a start and end point is just a way to create the experiences in the middle.

Hoops Brewing will launch in spring 2017