By the end of 2006 I had completed the northernmost 140 miles or so of the Superior Hiking Trail over three separate backpacking trips. My methodical march from one end of the trail to the other was broken up that summer, however, when newly cut segments of the SHT in Duluth demanded my immediate attention.

I can’t fully express how awesome it is to have the SHT through Duluth, how quickly I’ve taken it for granted, and how I never even dreamed of it before it happened.

Somehow I actually thought of Duluth as an outstanding hiking city before the SHT. In retrospect, it really wasn’t that special. There were several excellent options — Park Point Nature Trail, Chester Creek, Hartley, Lester River, Congdon Park, Lincoln Park, Western Waterfront — and then there were a few gravel railroad beds, old roads and paved trails for walkers/bikers. Mostly, however, there were many muddy unofficial paths, swampy ATV routes and overgrown ski and snowbobile trails crawling with ticks. So, not really outstanding back then; more like pretty good.

If you wanted to hike the western hillside and view the overlooks from a footpath instead of Skyline Drive, you had to bushwhack before 2006. I grew up doing that, not realizing a group of organized and ambitious human beings could carve a deluxe trail through the entire city in just two summers. God bless them. Now, we have an outstanding hiking city. So 2006 began the day-hike era of my 16 years on the SHT. There would still be trips north with a heavy backpack through remote sections, but most of my miles would happen by just driving to a trailhead, hiking off without needing to carry even a water bottle in many cases, and turning around to retrace my steps back to the car.

Not having a 40-pound pack, by the way, makes it easier to bring along a 60-pound nephew or a 90-pound Doberman. 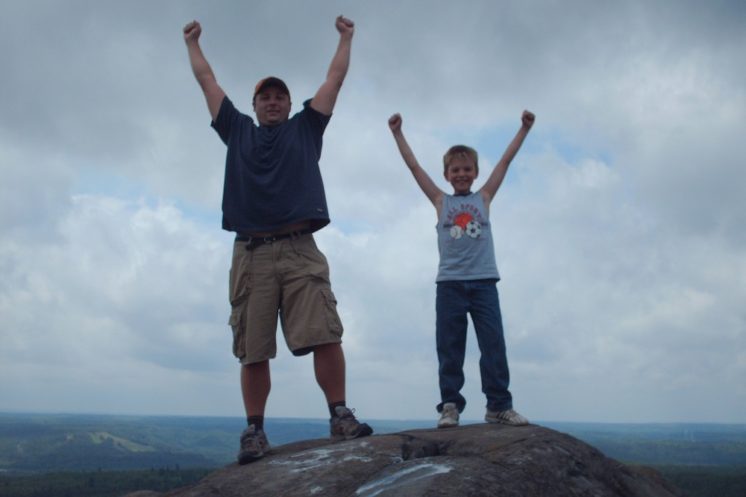 I’ve probably hiked the entire Duluth stretch of the SHT ten times over in the past decade, and the sections between Piedmont and Spirit Mountain dozens upon dozens of times. All of the photos shown here are from 2006 and 2007 though — when it was fresh and new. People ask me what the best and worst parts of the Superior Hiking Trail are, and I can summarize it pretty succinctly. I have an A-F grading system for trails in general. I don’t keep a notebook or maintain any online maps for sharing my opinions, because it’s probably geeky enough to just explain it and move on.

Grade A trails are well marked, clean and dry, and have excellent scenery. Simple as that.

Grade B trails are well marked, clean and dry, but the scenery is mediocre. You’re hiking through a nice forest, but you’re not going to see vast overlooks or awesome rivers or anything of particular note unless you are some kind of out-of-control botanist.

Grade C trails are either a little confusing to follow, involve balancing acts to avoid puddles or are just marked routes through city streets or uninteresting places for the mere purpose of connecting two better trails.

Grade D is a sloppy and hard-to-follow path that will take you to something moderately interesting but not all that great.

Grade F is a messy path that seems to end in the middle of nowhere and the most interesting thing you will see on the way is a junked dishwasher.

The Superior Hiking Trail is pretty much entirely grades A-C. An incredible amount of it is grade A. The best stuff is north of Two Harbors. Duluth is just as good in parts, but not overall as good. The sections in the townships between Duluth and Two Harbors are the least interesting.

In 2007 construction of the Duluth stretch was complete from Martin Road to the Grand Portage Trailhead on the St. Louis River. I had hiked it all by Aug. 19. That mission completed, my map was once again pretty clean. Top 140 done. Bottom 40 done. Middle 130 to go.

It wearies me to see hordes of people so downcast from something as small as a presidential election. Your time and...