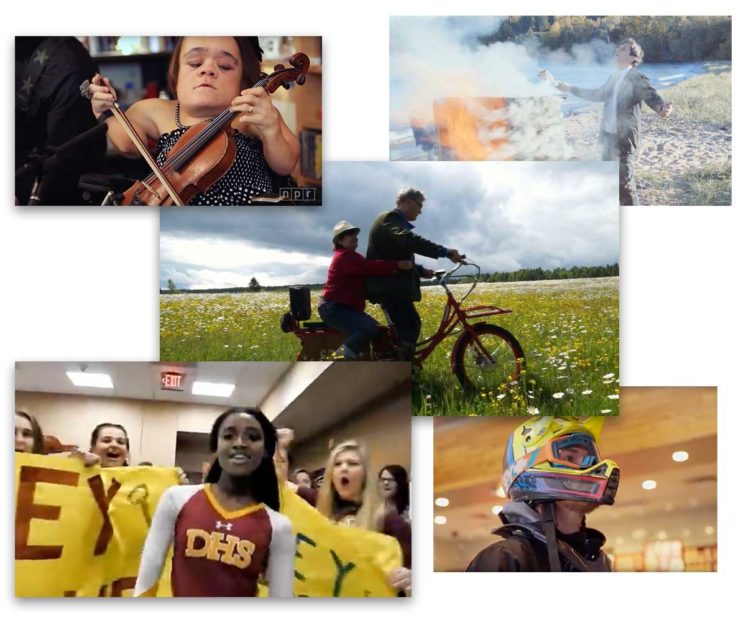 Among the 250+ videos that landed on PDD in 2016, we’ve chosen 17 to feature as “the best.” From music videos and aerial waterfall footage to everything in between, here’s how people amused themselves with cameras in Duluth this year.

Rick McLean – St. James
Rick McLean released his debut EP Coupla Focal in late 2015 and his first music video, made with help from Ian Vincent and Jacob Swanson, is a hard rockin’ anthem about the patron saint of Spaniards. Originally posted Jan. 18.

North Coast Watchman
Advocate Cycles of Bloomington produced this fat-tire bike video on the snowy hills of Duluth for this video, set to the music of Teague Alexy’s “The Raggedy Hat of John Henry.” Originally posted March 13.

Woodblind – “Kom-on-Inn”
Woodblind joined forces with Big Wave Dave and the Ripples for the song “Kom-on-Inn,” featured in a video shot at the Kom-on-Inn in West Duluth by videographer Myke Dixon. Originally posted April 27.

Denfeld, Crazy in Love
The original Denfeld Lip Dub for 2016 was pulled from YouTube for using the Jay Z song “Run This Town.” The alternate version, however, is right here and packed with Hunter spirit. Originally posted April 29.

Space Carpet – “The Only”
Desten Lee Johnson’s video for this Space Carpet song was produced for the annual Homegrown Music Video Festival. Originally posted May 11.

Meat
The short film Meat, directed by Michael Forstein and shot in Duluth, screened at over 30 festivals across the United States, Europe and Australia before making its way to the web in 2016. It tells the story of an idealistic college student forced to take a job as a door-to-door meat salesman. The script was written by Duluth native Colin Keith Thomsen. Originally posted May 12.

Kids Rolling Things Down a Hill
Jim Richardson takes his camera into the streets of Duluth’s Central Hillside neighborhood, ideal for rolling a seedpod, toy cars, or a quarter down the hill. Originally posted July 11.

A Ride Through a Field of Daisies
On the North Shore of Lake Superior near Knife River, Frank Sander rides through a field of daisies with his new bike. Slightly promotional, mostly delightful. Originally posted July 19.

Urban Downhilling Duluth
Capitol Letter Collective captures Max Fierek tearing up the streets of Duluth … because who said mountain biking had to be done in the woods?Originally posted Nov. 23.

We bid farewell to 2016 with a recap of regional happenings. Our next PDD Quiz, which will cover coming attractions...