The opening date of a new eating or drinking establishment is often a moving target. A majority of enterprises planning to launch in the coming months required significant gutting and reconstruction of old buildings, a common recipe for delays. Here’s the scoop on four soon-to-launch food and beverage joints. Owner Rick Lampton has pushed back the anticipated opening date for Superior’s 7 West Taphouse to Oct. 3. The burger bar at 1319 N. Tower Ave. is modeled after the original Duluth location. It will feature burgers, tacos and 40 rotating taps of craft beer. Click here to read the full-length story from July. Tycoons Zenith Ale House will close on Oct. 16 and reopen on Oct. 22 as Blind Pig Gastro Pub and Ale House. The rebranding is an effort to better align with changes in the neighborhood, according to Marissa Saurer, who heads up marketing for the restaurant’s parent company Just Take Action. In 2015 the Duluth City Council designated a nine-block area along Superior Street that includes the Blind Pig as the Historic Arts and Theater District. The idea is to cultivate performing, visual and culinary arts in this zone.

Saurer says the Blind Pig (which takes its name from Prohibition-era Midwestern speakeasies) will fit better in the HART District with an atmosphere and menu that’s more casual than Tycoons, which was an upscale supper club.

In addition to revamped décor, she says there will be a new menu focused on “more local centric and creative” dishes. Pork and beef will be locally sourced. Sandwiches will be served on breads and pretzel buns baked in-house. Other planned menu items are unique to Duluth, like street tacos and Udon noodle dishes.

Fitger’s Brewhouse, also owned by Just Take Action, will brew a coconut stout house beer to be sold exclusively at Blind Pig. The bar will continue to serve additional Brewhouse beers and has developed a new lineup of cocktails, to be served both in the restaurant and downstairs at the Rathskeller. Saurer assures no big changes are planned for the beloved subterranean saloon.

The Blind Pig will host live music from local and touring acts from Thursday to Sunday. In related news: the Fitger’s Brewhouse stage is back. An institution of the Duluth music scene, the Brewhouse stage was replaced for a brief time by dining booths. But management recently decided to bring the music back. Wednesday night tunes are once again on the agenda at the brewpub. Financing and permitting delays pushed back the opening of Duluth Grill owner Tom Hanson’s new Lincoln Park restaurant project. As of last week, all is in order for OMC Smokehouse to move forward. If the build out goes as planned, Hanson expects a January or February opening for the anxiously anticipated barbecue joint.

Hanson hasn’t been as frustrated by the delays as his fans. “The beauty of the delays is that they’ve allowed us to strategize,” he says, adding that a business succession plan is now in place that involves transitioning longtime employees into different roles at the restaurants. “At some point I realized, this isn’t just my business anymore,” Hanson explains.

Though most people see the elder Hanson as the face of the new restaurant, he emphasizes that the ownership and identity for OMC Smokehouse, which stands for “oink, moo, cluck” belong to his son Louis Hanson and current Duluth Grill general manager (and soon to be OMC GM) Jeff Petcoff. The duo are longstanding employees of the Duluth Grill. They’ve been working at the restaurant for 15 years, starting when they were both 16 years old.

Louis championed the smokehouse concept and has been traveling around the country studying the many styles of barbecue and improving his charcuterie skills in preparation for OMC’s opening.

The restaurant now has a website and is posting drool-worthy photos related to recipe testing and construction updates on its Facebook page. Items like Texas brisket, St. Louis ribs and fried chicken will be on the menu.

Plans are also in the works to sell distinct bottled sauces, such as rhubarb barbecue and a beer-infused barbecue sauce made with Bent Paddle Brewing’s 14° ESB. Click here to read the full-length story from January. 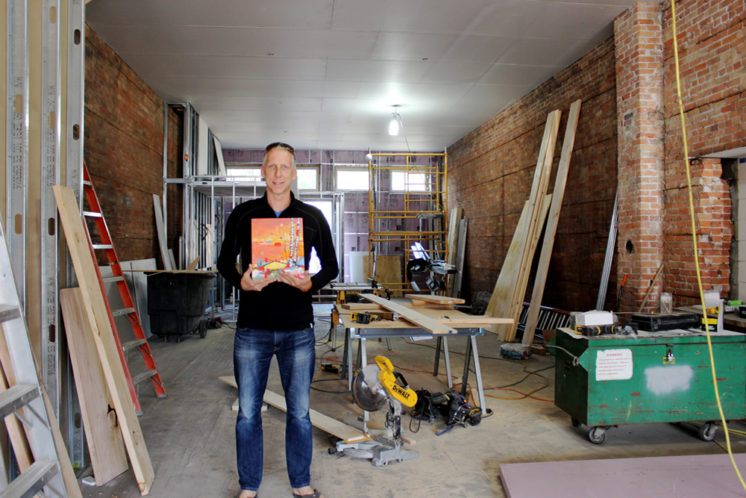 Tom Donaldson in the new Boreal space with a painting by local artist Adam Swanson that will likely go on the wall once the cafe is completed.

Next door to OMC Smokehouse, in the old Johnson Appliance and TV Center building at 1907 W. Superior St., a new coffee shop and café with an interesting concept is in the works. Husband and wife team Tom Donaldson and Heidi Frison, a pilot and lawyer, respectively, hope to open Boreal in late spring 2017.

The structural rebuild is 75 percent complete. The building will get a new storefront next month and the café build out will start this winter.

Boreal will be a full service, high-end, third wave coffee shop, according to Donaldson. It will feature “thoughtfully sourced beans” from sources such as Duluth Coffee Company, along with other roasters.

Boreal is being billed as an “all day café” with a combination of offerings not found elsewhere in the city. The plan is for healthier foods, including raw and Paleo options, smoothies and fresh juices.

Frison has worked as a professional chef and baker. She’ll put this expertise to work for the café, which will sell baked goods made with no refined sugars and minimal gluten.

Donaldson anticipates staying later several nights of the week, serving wine, beer and small plates. He says the couple would like the café to ultimately progress to include a farm to table bistro.

https://www.youtube.com/watch?v=QeQrR4jjgJM Former Duluthian Mark Lindquist has been busy in his basement in Baxter. A five-track EP by his one-man band...