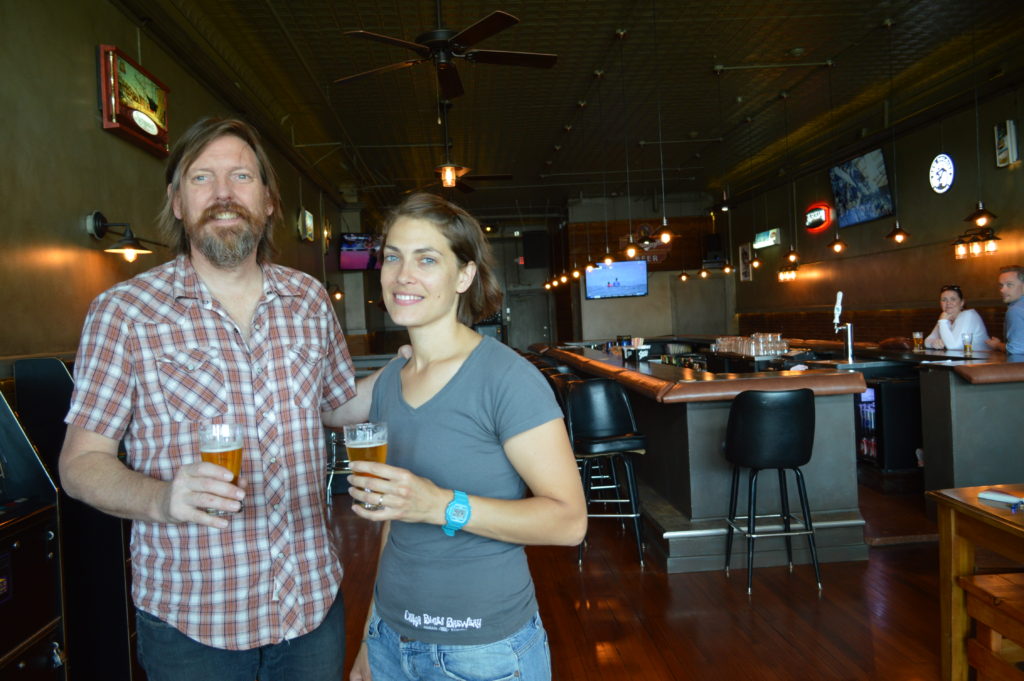 Tim and Naomi Nelson pose inside the Cedar Lounge just off Tower Avenue in Superior.

Trailblazing craft brewery owner and longtime Duluth bar developer Tim Nelson is ready to launch his newest drinking establishment in a historic, working waterfront neighborhood on the Superior side of the Twin Ports.

The Cedar Lounge, 1715 N. Third Street, just off Tower Avenue, opens in the shadows of the Harvest State Co-op grain elevators Friday, Aug. 26. Nelson and his wife, Naomi, purchased the historic bar building in December and the property has undergone a seven-month restoration.

“We’re going to open the doors, turn on the lights and see who shows up,” said Nelson. “It’s a soft opening, to see where we’re at and then in September we’ll throw party and really go for it.”

“There’s just no room for it here,” he said. “And we’ve been busy, so really don’t have the time for it either.”

While there may be no room for giant steel kettles and a tangled network of piping, the Cedar Lounge has plenty of room for history. Workers exposed ancient tin ceilings, well-worn hardwood floors and sturdy brick walls during the renovation. New windows were installed near the front door and the oval bar got an updating. New windows were added to the front of the Cedar Lounge. The old sign remains.

“We brought back the history,” said Nelson. “As far as I know it’s been a tavern for a long, long time.”

Nelson said the building dates to 1910. Old city records show it served as a drinking establishment as far back as the 1920s when it was listed as a “soft drink” business. It became known as the Cedar Lounge in 1974.

Nelson said family history drew him to Superior as well. Decades ago, his great-grandfather owned and operated a bakery just a couple of blocks away.

“I like Tower Avenue a lot. Back in college it was the place to go,” he said. “I like the working harbor, the fact that the (freighter) Ryerson is parked in our backyard and the trains go by every hour. It’s a neat location.”

“Anytime we get new investors from from the inside here in Superior or the outside coming from across the bridge, that’s a good thing,” said Minor. “Microbrewing is really hot right now and they are certainly one of the groups leading the nation in that industry.”

“Because of location, heritage, family, this was the place they wanted to be,” he said.

The recent Tower Avenue improvement project has helped attract more than a dozen new businesses to the downtown Superior strip, said Minor. The improvements have helped the north end become a destination for tourists and locals alike, he said.

Nelson has a strong reputation for putting together high-quality, well-run establishments in Duluth, said Minor. The same should hold true in Superior.

“Reputation counts more than anything,” he said. “People are looking for something different, a different tavern, a different taste. They have the reputation for bringing it all together in a project.”

Nelson established Fitger’s Brewhouse at the historic Fitger’s Brewery Complex in Duluth with business partner Rod Raymond in 1995. At the time, it was one of just a handful of craft brew pubs in the state. Nelson and Raymond went on to create several more Duluth eating and drinking establishments under the corporate name Just Take Action, including the Burrito UnionTycoons Alehouse and the Red Star Lounge (now known as the Barrel Room).

Last August, Raymond bought out Nelson, which sent Nelson on a hunt for a new project of his own.

“I was looking in Duluth and Superior, just driving around trying to figure out where it was going to go,” he said. “Then I drove by here and I saw the ‘For Sale By Owner’ sign. I just stopped in.”

Nelson said the location will be ideal once Blatnik Bridge repairs are complete.

Well, there is something. Nelson said the bar will offer permanent happy hour prices until the bridge construction is completed in October.

As we enjoy the last dregs of summer in all its boozy glory, we're on a mission to determine Duluth's...