New 7 West Taphouse on Tower Avenue could open in September A delay in financing stalled interior design work several months, but owners of the 7 West Taphouse in Superior say they plan to open their burger and beer business in mid-September.

The concept will be familiar to many Twin Ports residents. The original 7 West Taphouse opened at 7 West Superior Street in Duluth in 2012. Its success sparked the opening of a St. Cloud location in December. Plans for the Superior location were announced in early 2015.

“The focus is on craft beer and burgers as a starting point,” says Rick Lampton, the managing partner behind both Twin Ports 7 West Taphouse locations, as well as the three local Grizzly’s Wood-Fired Grill restaurants. His partners in the Duluth 7 West are Steve Letnes and Barry Rindahl; Letnes is also a partner in the Superior 7 West.

The Superior 7 West at 1319 N. Tower Ave. will feature 40 taps to start, with room to add more if there’s demand. The Duluth location has 46 taps and, arguably, the best craft beer tap list in the area. 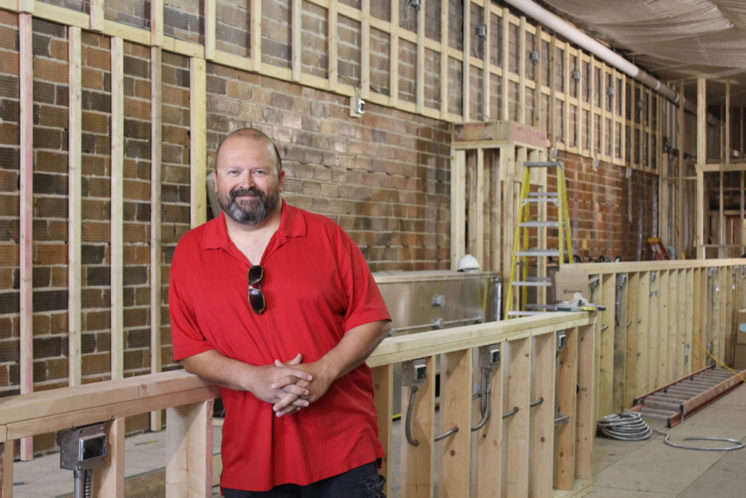 Along with an extensive craft beer list, Lampton says the restaurant has a simple and effective business plan that emphasizes speed, value and quality. He says the cost of running a restaurant with a limited menu is low, which helps keep prices down. 7 West is one of a dwindling number of local places where a hand-formed burger patty costs five bucks. The Anchor Bar & Grill has been the staple for cheap burgers in Superior for decades, and was voted Perfect Burger Restaurant in a PDD poll. Located just eight blocks away, 7 West will likely draw some of the Anchor’s peak-time overflow crowd and people looking to try different specialty burgers and tap-beer options.

The Superior 7 West will employ 20-30 people and will have the same food offerings as Duluth’s location, where burgers and hand cut fries have long been the menu staple. A plain burger with nothing on it will run $3.99 and there’s a multitude of burger options for the not-so-picky and more adventurous eaters, from brown sugar bacon to sauerkraut.

Tacos have recently been added to the menu in Duluth. The restaurant runs burger-of-the-month and taco-of-the-month specials.

“We get pretty crazy with the BOMs and TOMs each month,” says Lampton, who helps the kitchen manager brainstorm menu ideas. This month, the burger-of-the-month is topped with breaded and deep-fried bacon. If monthly specials are a big hit with customers, sometimes they land a spot on the permanent menu.

The Superior location will resemble the original 7 West Taphouse, with an industrial feel that includes exposed brick and a metallic ceiling. Lampton says he looked at a number of buildings around Superior before settling on one with a similar footprint. The building dates back to early 1900s, and was originally a clothing store; it most recently served as a dental office, which they have been “gutting down to a shell” before rebuilding as a restaurant. It’s long and narrow — a bit longer and not quite as wide as the original location. But there will be more two-top tables and some booths, providing 15 more seats than in Duluth.

Lampton says Duluth’s 7 West has a regular following of loyal clientele that runs the gamut from business professionals during the day to college students at night, and the community has been enthusiastically awaiting the new location.

“People are very excited,” he said. “I can’t go anywhere without them asking me when it’s going to open.”

Updates are available on the 7 West Taphouse Superior Facebook page or by texting “7west” to 51660.

This week we stretch the boundaries of Selective Focus -- both geographically and conceptually. Moheb Soliman is a poet who...