According to the Brewers Association, Minnesota had 105 craft breweries in 2015. This number continues to rise, but the majority of breweries are still heavily concentrated in bigger cities, and particularly around the Twin Cities. But the founders of Moose Lake Brewing Company are bucking this trend; they believe every small town deserves its own brewery.

The opening of Moose Lake Brewing at 244 Lakeshore Drive in Moose Lake is planned for the end of July. Moose Lake has a population of 2,787. It supports a handful of restaurants and a municipal liquor store/bar.

Though Moose Lake might not be considered a prime tourist destination, it has a good location a couple of miles off I-35, between Duluth and Minneapolis, and is in close proximity to the Soo Line and Munger bike trails. The closest brewery to the north is Bent Paddle in Duluth and to south is Big Wood in White Bear Lake, which are 40 and 100 miles away, respectively. 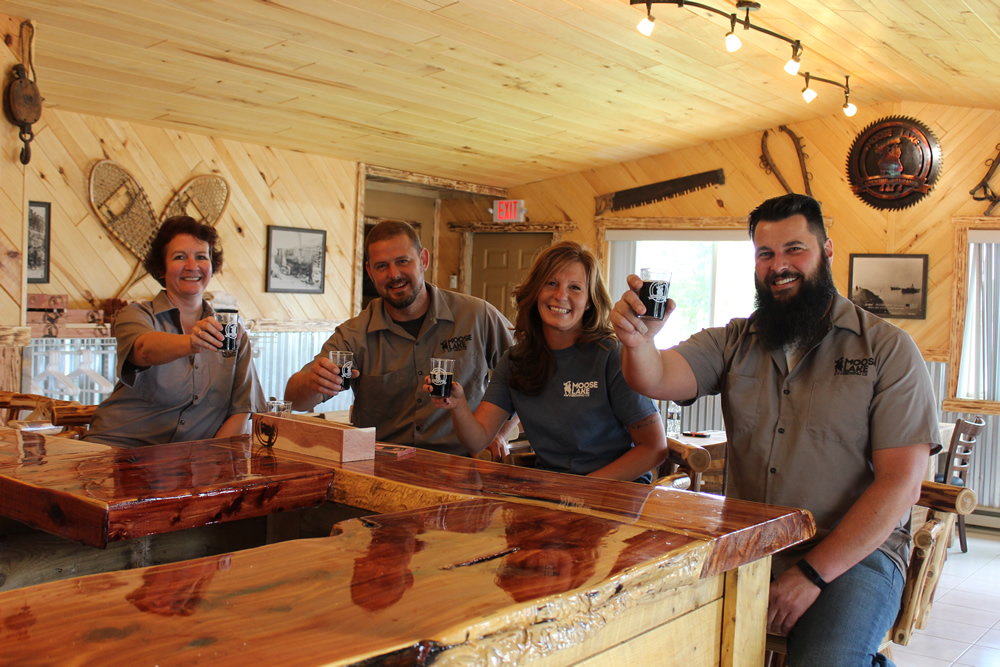 The owners of Moose Lake Brewing expect they’ll get a decent traffic from tourists due to the auspicious location and the year-round recreation options provided by area lakes. The brewery’s taproom overlooks Moosehead Lake. Partner and brewer Paul Christensen notes you can hear loons cry and see people paddling by in canoes from the taproom.

“The location is a draw — having a brewery on a lake is very unique and sets us apart. Being on the water has a lot to do with our identity,” he says. The brewery is also dedicated to catering to the locals. “Locals don’t have a beer to call their own,” says partner and brewer Shawn Wigg. Wigg and his wife Tanya, Christensen and partner Janet Anderson are all from the area. “We’re not just a group of investors from someplace else. We have community ties. If someone comes into the bar there’s a 50 percent chance we’ll know who they are,” says Christensen.

“We have extreme pride in our community and being a part of it,” agrees Tanya Wigg. “This is where we are raising our families.”

As is the case with many small businesses, the partners wear many hats, pitching in to accomplish whatever task is at hand. Wigg and Christensen have both been working regular jobs while using all their spare time to get the brewery up and running over the last year and a half or so. From renovating the building to screen printing the T-shirts, it’s been a DIY exercise. “It’s 100 percent in-house. It’s our blood and sweat,” says Wigg.

According to Anderson, the partners have made a conscious choice to utilize area vendors as much as possible. They used local lumber for the taproom and handcrafted bar and they approached existing restaurants about providing food delivery to the taproom, rather than build their own kitchen. Historic photos on the taproom walls depicting Moose Lake’s logging days will be for sale, with proceeds going back to the local Historical Society. A series of equipment delays as well as permitting and ordinance issues delayed the brewery’s opening for nearly a year. During the construction, there have been two trips to the emergency room. Wigg suffered a broken ankle, while Christensen stepped on a nail. They joke about how the emergency room staff asked questions about when the brewery was going to open before treating their injuries.

The partners agree that the biggest challenge in starting the brewery hasn’t been the building or the actual beer making. It’s the bureaucracy. Christensen points out that unlike the Twin Cities, where there’s boilerplate language for start up breweries, small town breweries have to create new local ordinances to accommodate their businesses. The partners say the city Moose Lake has been receptive and helpful, but there has been a big learning curve for everyone involved. The fledgling brewery drew on the experience of Two Harbors and the success of Castle Danger Brewing to work though the process. Moose Lake Brewing has also received useful advice and insight from nearly a dozen established breweries, which Wigg finds heartening. “The craft beer community is not really competitive, everyone is in it together — it’s different from any other business I’ve ever been involved in,” he says.

Wigg and Christensen have homebrew experience and they also enlisted the help of Bev-Craft, a new company started by Tim Nelson (co-founder of Fitger’s Brewhouse) that helps craft breweries become sustainable. Veteran brewer Dave Hoops now serves as Bev-Craft’s director of brewery operations and has been assisting Moose Lake Brewing through its start-up with recipe development, ingredient sourcing and general mentoring. Hoops was the master brewer at Fitger’s Brewhouse for 17 years. Moose Lake Brewing will initially offer several flagship beers, including an IPA, pale ale, and a milk stout from a recipe shared by a local doctor who homebrews. The brewery has both a 3.5-barrel system and a 15-gallon pilot system for test batches and special brews, it will produce up to 2,000 barrels per year. The taproom will sell pints and flights as well as growlers to go. The partners anticipate their beer will also be available on tap at local restaurants.

The brewery is hosting an open house on Saturday, July 2. Though the brewery can’t legally serve beer yet, you can stop by to tour the brewery, check out the taproom and buy merchandise.

We were at the graduation ceremony for the Harbor City International School in Duluth, and the commencement address was by...