Photos of an Empty Skywalk 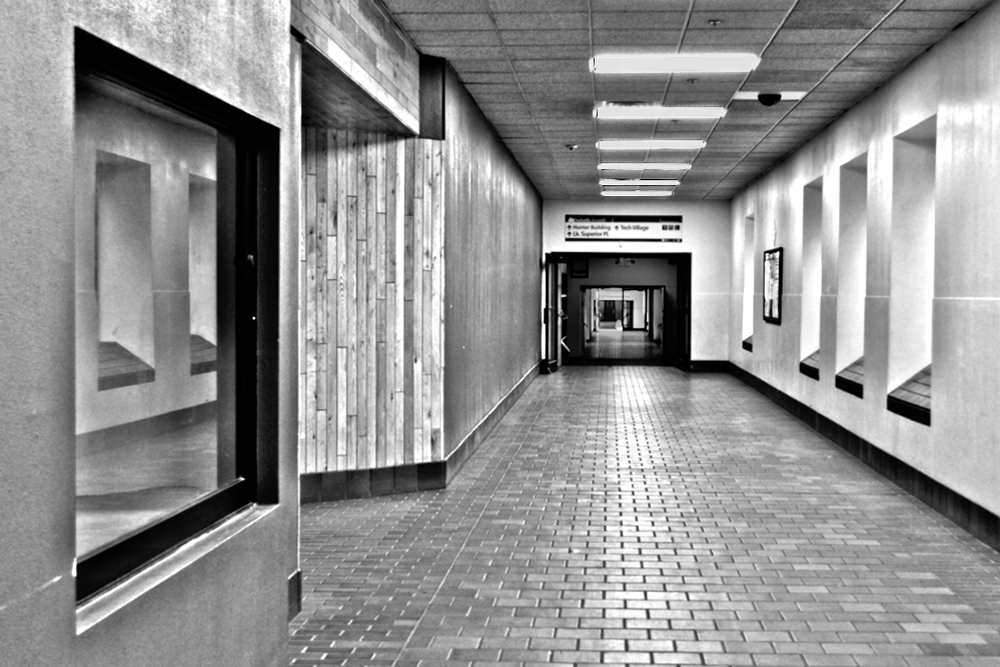 The Duluth News Tribune recently published an article about the Downtown Task Force’s recommendations to improve conditions in downtown. This summer, I spent some time walking through the Skywalk system and was a bit shocked by how empty it was. The summer might not be the most popular time to use the Skywalk, but it wasn’t just the absence of people. So many of the shops that I remembered were gone. I didn’t intend to make a themed photo series about this, but I had my camera and kept turning a corner to find another impossibly long, completely empty hallway. 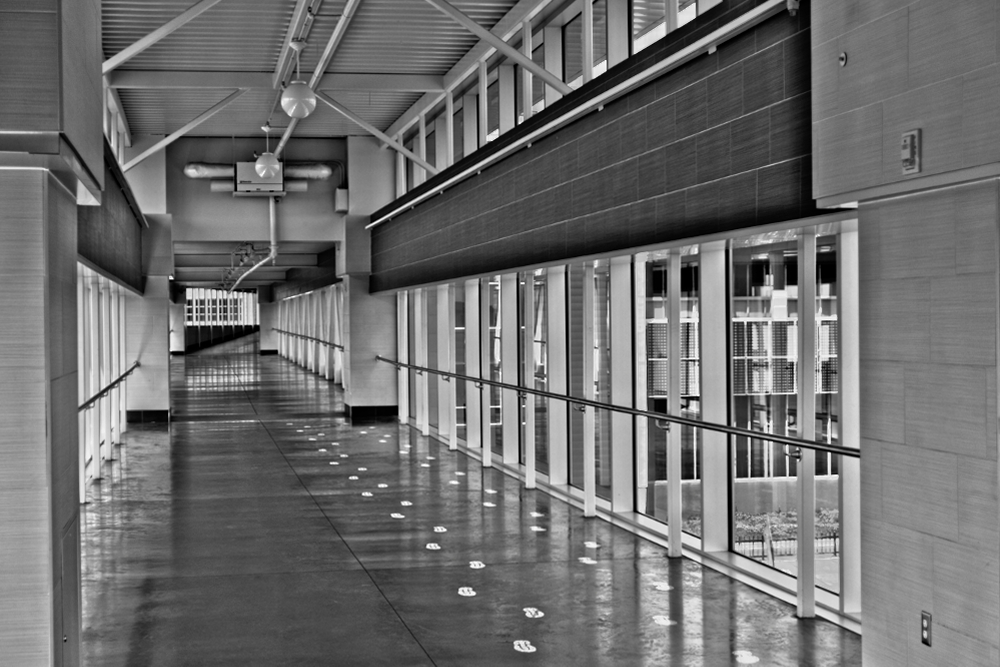 I recently listened to a Decoder Ring podcast about the decline of malls that discussed the popularity of images of empty commercial spaces. They talked about a certain fascination with empty places that are so easy to imagine having once been full. This certainly applies to the Skywalk. When the Holiday Center Hallmark store announced its closing in November of 2019, the owner reflected on a time when there were so many people in the walkways that she couldn’t see the business across from her. 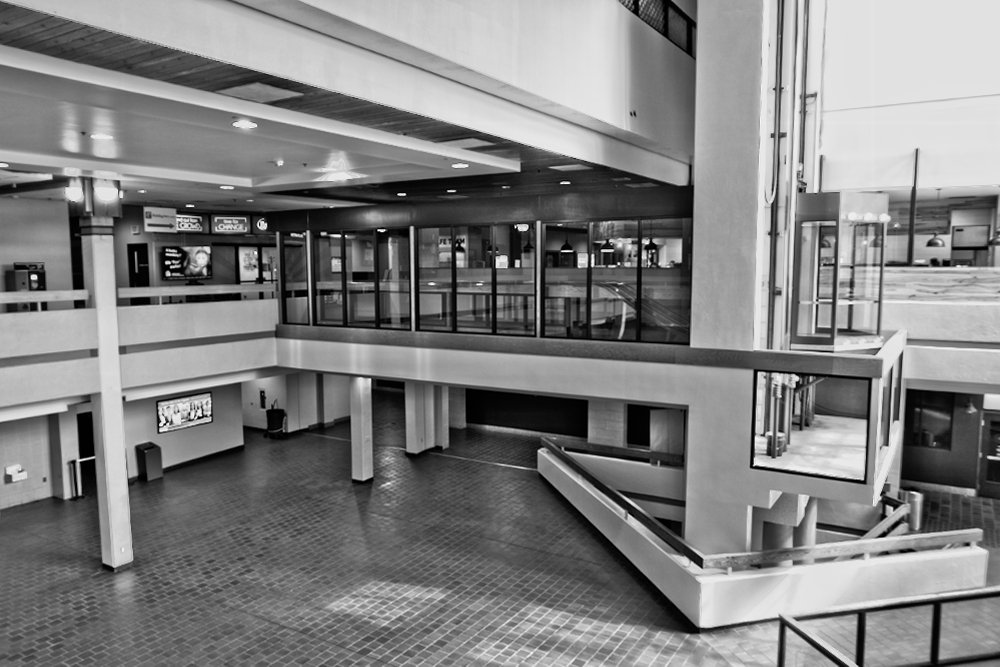 I remember something like that too. When I was a kid, the Skywalk was the nicest part of our winter walk from our East Hillside home to the Duluth Public Library. Sometimes we’d get popcorn at the stand that moved out in February of 2020, which seems like good timing in retrospect. My first Lego set came from the Explorations Toy Store, a business whose various locations seem to reflect a more general story about the Skywalk. It opened in the Skywalk’s early days, moved a few blocks to a street level location some years later, left downtown for a space in a stripmall on the top of the hill in 2014, and closed for good in 2019. 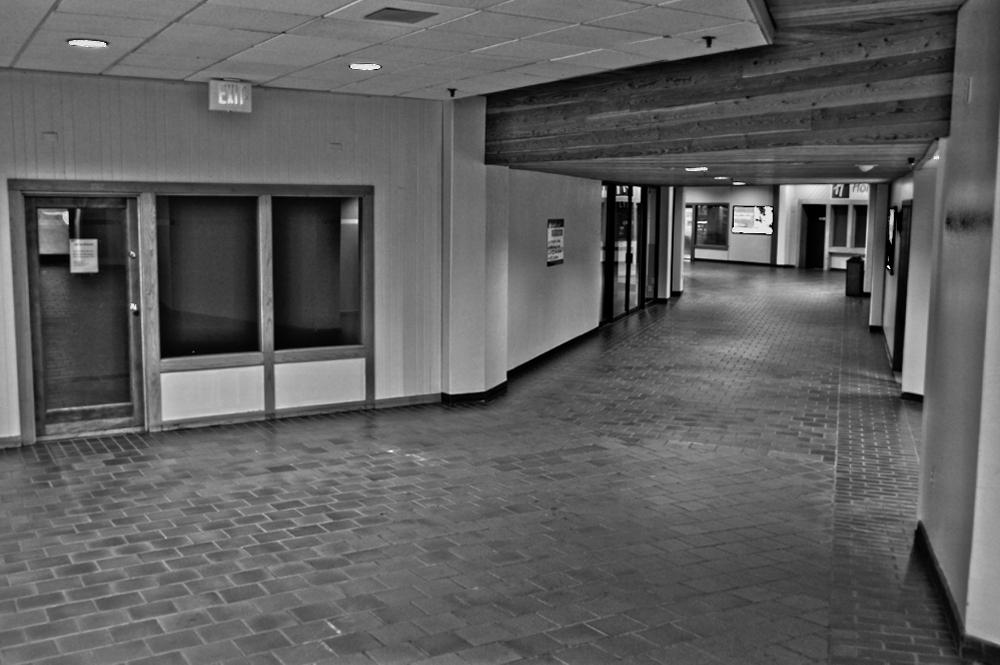 I have a vague and possibly inaccurate recollection of the location above having once been a popular pool hall. I remember using the restroom there as a kid and feeling quite scared when I saw there were no other children and the adults did not look like friendly parents. 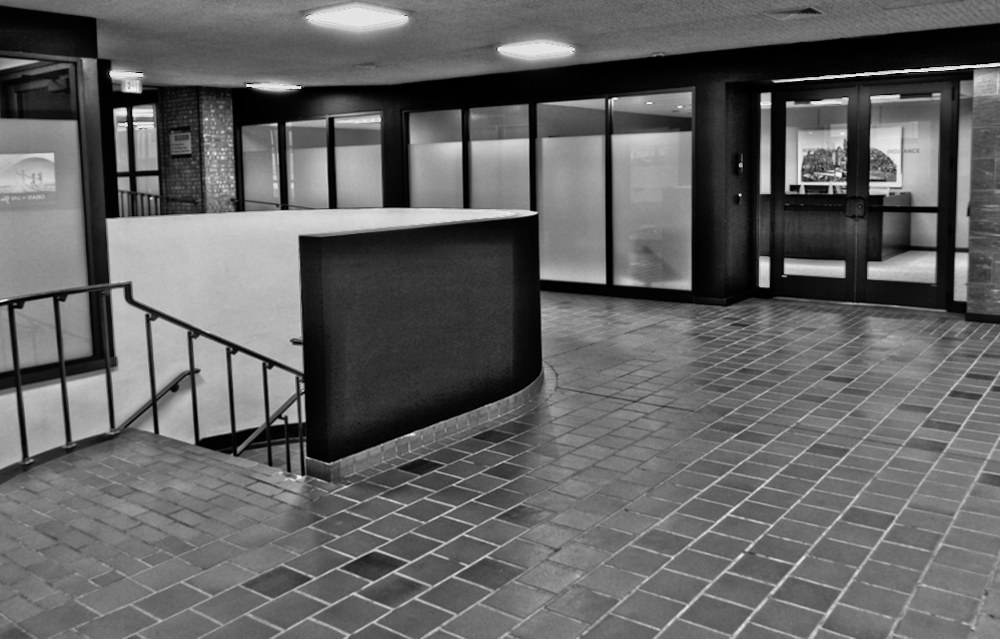 Not everything has changed. The North Shore Bank of Commerce, my father’s bank, is still there in the same location. And things have even expanded since I was a kid. The library was connected via a ‘skunnel’ to the Radisson in 1999, although on the day I was there that connection was chained up. 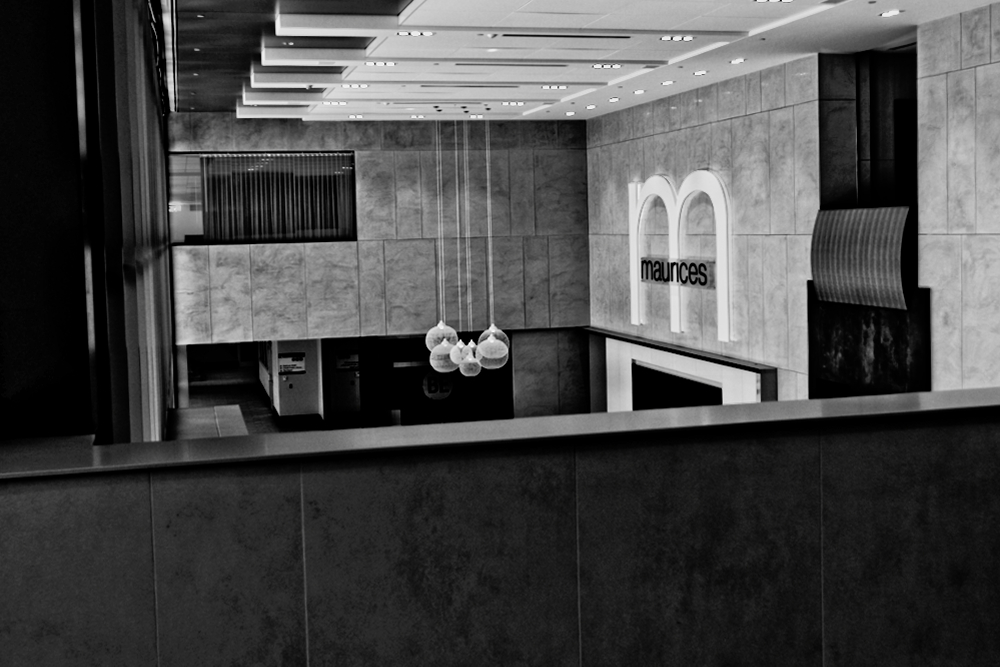 Maurices, a business tied rather directly both to downtown Duluth and U.S. malls, made an $80 million investment in a downtown location in 2016 that came with a $20 million public investment in the Skywalk. 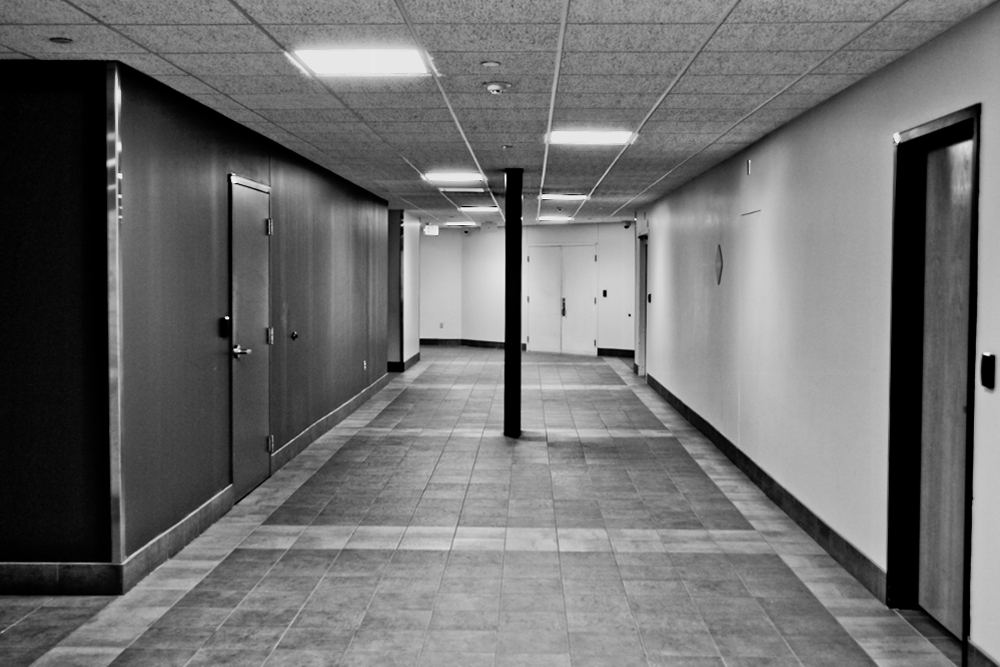 Three years ago, the entrance through Minnesota Power on Lake Street closed but 10 years before that another entrance through the technology village opened, whose blank walls can be seen in the above photo. I was talking with someone who thought the plan to add more art downtown was a cosmetic solution to a structural problem. I see their point, but even in its better days, the aesthetic of the Skywalk seems to have always been a rather aggressive minimalism.

A recent News Tribune article talked about creating inviting displays on the street level of downtown but didn’t mention anything about the Skywalk. There are so many incredible artists in Duluth, both professional and amateur. It’d would be nice if just a small fraction of the millions spent on the construction of the Skywalk system could have been dedicated to funding some of those artist in the creation of a space that invites you in. 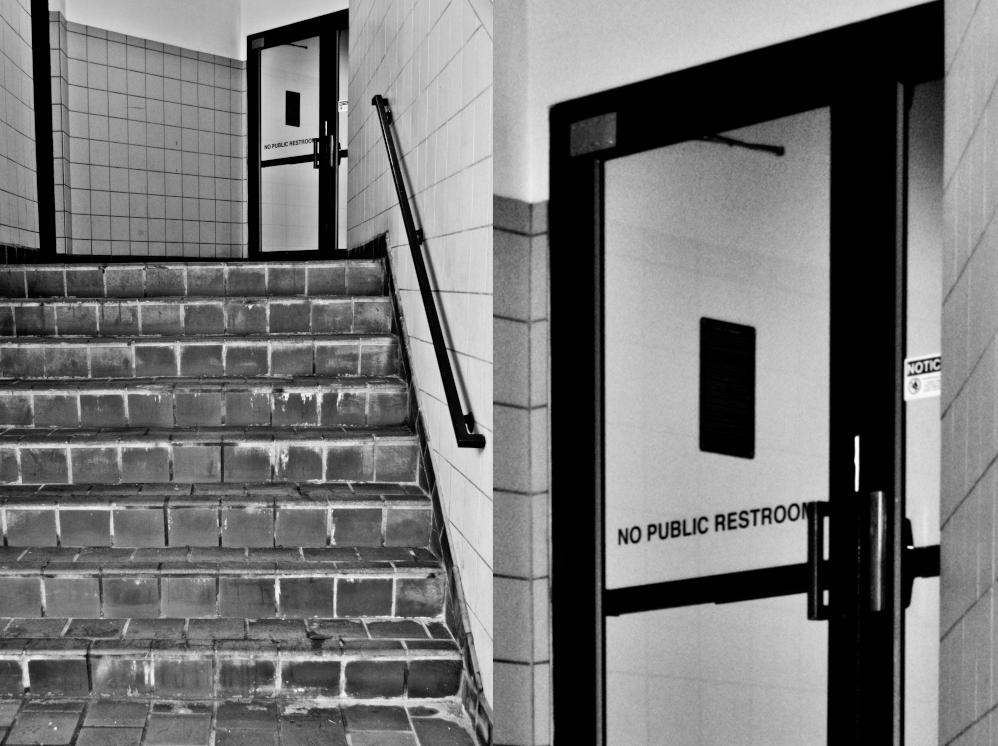 I think the slow but steady changes in how and where people shop make it difficult to pinpoint any specific moment when the Skywalk went from a place that people wanted to be to a place that people wanted to avoid. But if, from an entirely outside perspective, I had to define a turning point, I would say it was when the Holiday Center gave up on people being able to use the toilet and decided to welcome people with the greeting “No Public Restroom.” I understand that may have been a difficult choice driven by the use of the restroom by people who did not have access to support services, people struggling with mental health issues, or people who may have used the restrooms to shave, bathe, and possibly maintain their drug dependency. 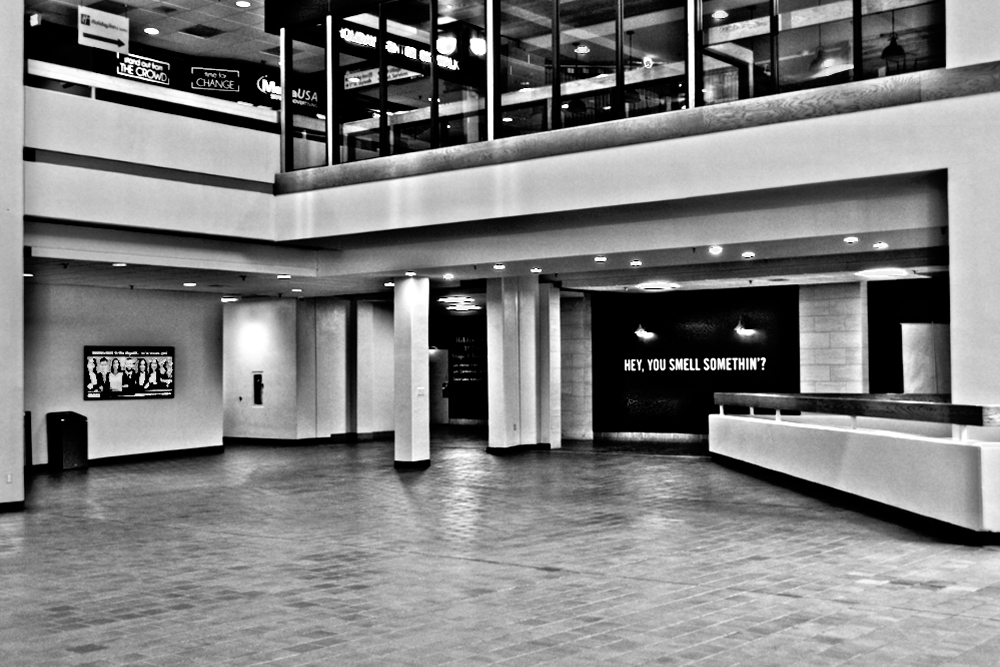 But everyone needs access to a toilet sometimes and when there are no public toilets, people who have other options will go to places that do have toilets and people without other options will turn any semi-private space into a toilet, which makes an already not inviting space particularly less inviting. 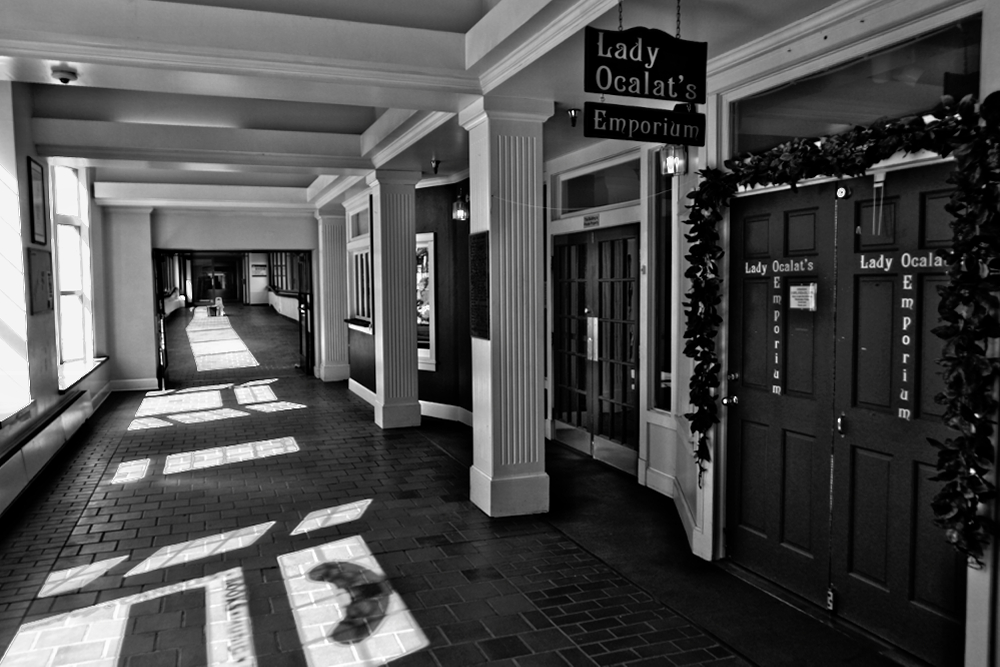 Which isn’t to say that all parts of the Skywalk have become unpleasant. Lady Ocalat’s Emporium demonstrates quite well that it doesn’t take the money of a major corporation to turn a section of the Skywalk into a charming space. 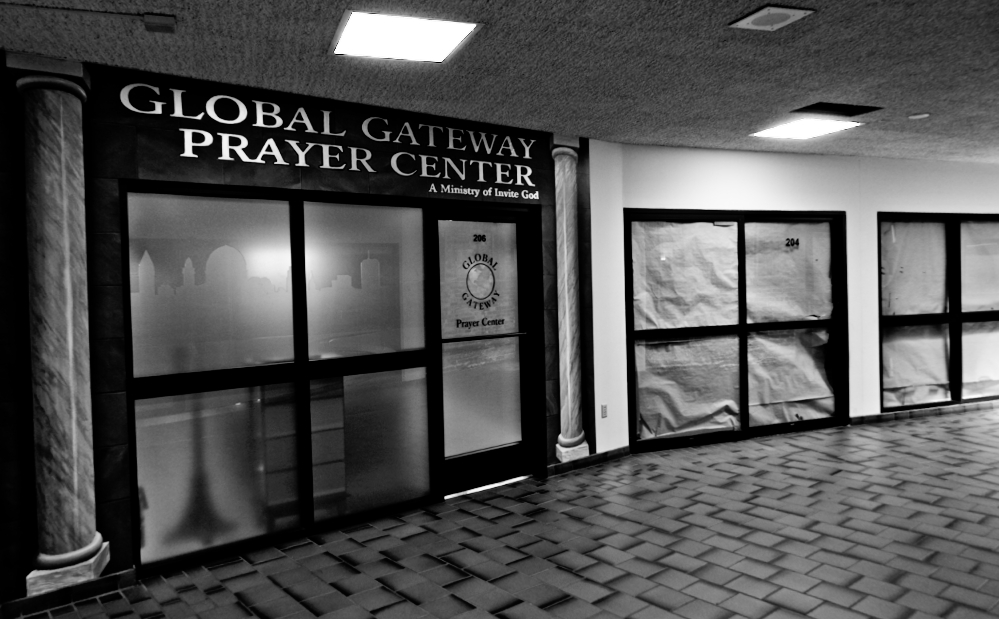 Really just about anything seems an improvement over blank walls. I’m not quite sure what the organization Invite God is or perhaps was, but I appreciate the work they put into making their small section of the Skywalk a bit more interesting. 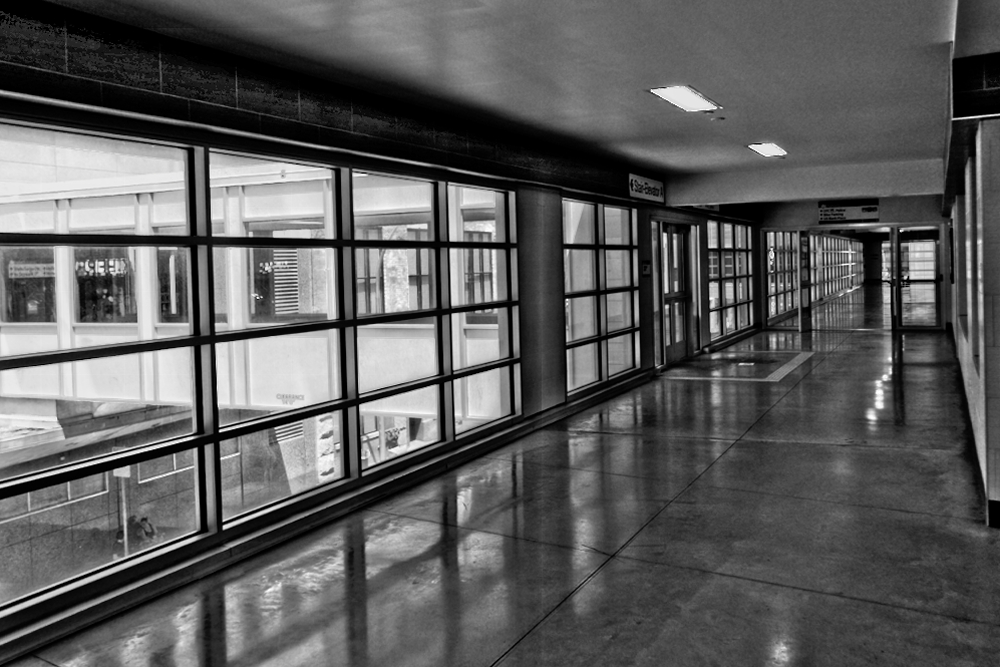 Even amongst the general emptiness, I did have a quite memorable chance meeting that reminded me that the Skywalk can still be fun place. A man a bit older than me who gave the impression of being a downtown regular saw me taking the above photo and asked me if I was a tourist. I said that I grew up in Duluth but now lived elsewhere. He replied, “Okay, if you’re really from Duluth, answer me this …” and proceeded to ask me a series of questions about local history. He gave me no particular credit when I answered correctly and shook his head in disappointment when I was wrong. It’s hard for me to articulate how much I appreciated this.

I moved away in my early teens. I still have family in the area, but because I didn’t graduate from high school in Duluth, learning about local history has been a way for me to both better understand a place that I’ve never really known as an adult and to address my insecurities about being considered a real Duluthian, whatever that might mean. Somewhere within me has always been the fear that a true Duluthian will challenge my identity and demand that I pass a test of local knowledge. The Skywalk system created the conditions for an encounter that allowed me to confront that fear and the thing that I feared turned out to be a lot of fun. I’m not entirely certain that I passed what ended up being a surprisingly comprehensive test, but I did learn that the first link of the Skywalk system didn’t open until 1977. I thought it was much older. That makes me feel more hopeful about its future somehow. Its not old enough to be obsolete. It’s just at a low point right now. 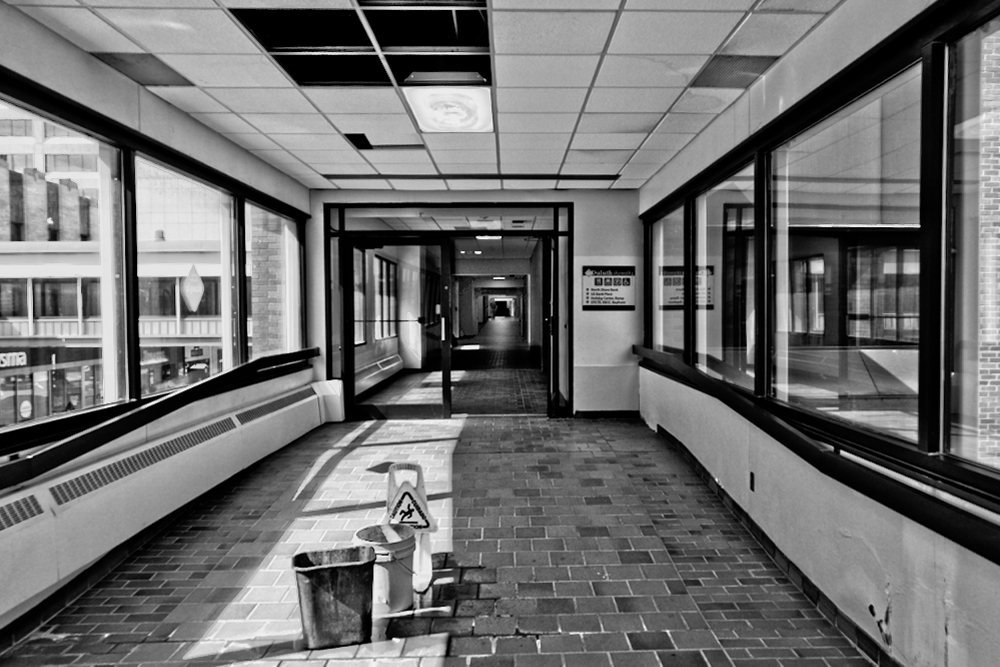 Given how well Canal Park and Lincoln Park are doing, the emptiness of downtown is really a bit surprising, if for no other reason than how close all these business districts are to each other. It seems like strengthening the connections between them would benefit the whole city. The Duluth Waterfront Collective has already put together a plan that would result in a much better integration of Canal Park and downtown. It took until 1918 or so to realize that blowing up the Point of Rocks is a lost cause, but the pedestrian and cycling connections between downtown and Lincoln Park could still certainly be improved.

No doubt there are a number of complex reasons why Lincoln Park has thrived while downtown has struggled. One possible factor could be that in Lincoln Park, local developers have found support for turning vacant lots into active businesses while downtown the City Council has supported the efforts of national companies to evict local businesses from historic buildings for the purpose of creating vacant lots. Hopefully the Downtown Task Force has some better ideas and my next downtown photo series will be in vibrant color. 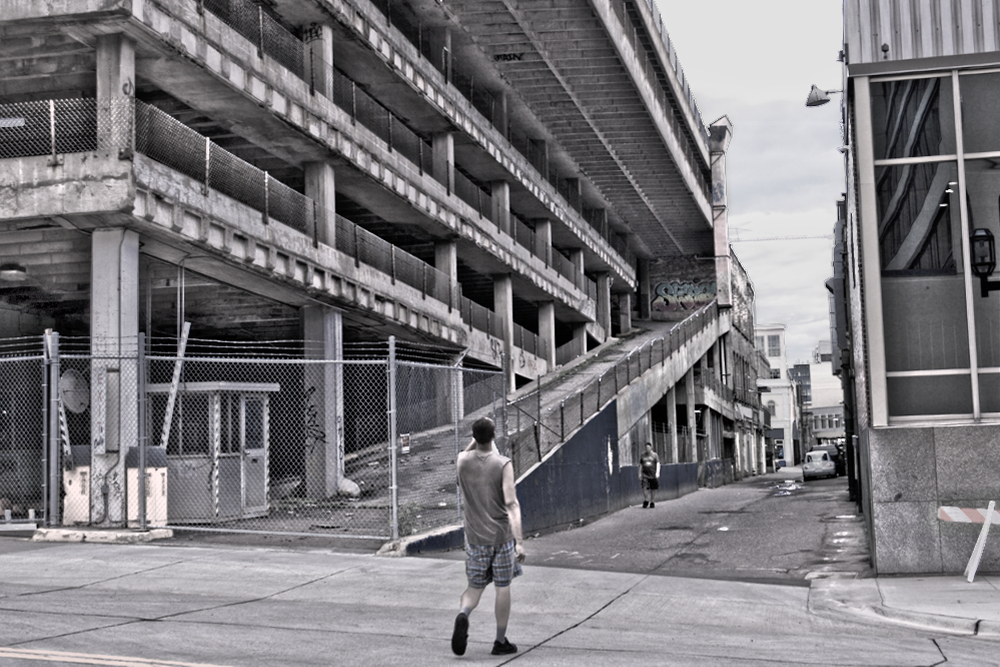 https://kstp.com/special-coverage/minnesota-live/rogue-robot-games-comics/ Ryan Fleming of Rogue Robot Comics and Games was on KSTP-TV's Minnesota Live with a nearly statewide audience, showing...