Ten years ago the Costello Block was a pile of bricks, brownstone and timber at 22-24 E. Superior St. It was demolished to make way for A&L Properties’ redevelopment and expansion of the Wieland Block, which incorporated two century-old structures to the east of the Costello Block — the Hayes Block and the Wieland Block, shown in both images above.

The Hayes Block and Wieland Block were collectively known at the time as the Corner of the Lake Building. The Hayes Block is the two-story section farthest east, financed and owned by Rutherford B. Hayes in 1870, seven years before he became U.S. president. That building was rebuilt in the early 1900s and at some point was connected to the neighboring Wieland Block.

The H. P. Wieland Block was originally a furniture store, built in 1889. It was designed by Oliver Traphagen, far and away Duluth’s most renowned architect.

The John J. Costello Block was comprised of two buildings of the same design. The section at 24 E. Superior St. was designed by George Wirth in the Richardsonian Romanesque Revival style. It was built in 1884 as a hardware store. The neighboring section was built from the same plans a few years later when Costello’s hardware store expanded. Abalan’s furniture store was the final occupant of the 22 section; Master’s Piano Shop closed out the 24 section.

The Costello Block was replaced by new Wieland Block construction, and A&L later built a Skywalk to connect it to the Duluth Technology Village and the rest of Duluth’s municipal Skywalk system.

The former location of the Strand Theater, 16 E. Superior St., was also built over in the Wieland Block expansion, but the Strand had been long gone by then; it was torn down in 1998. 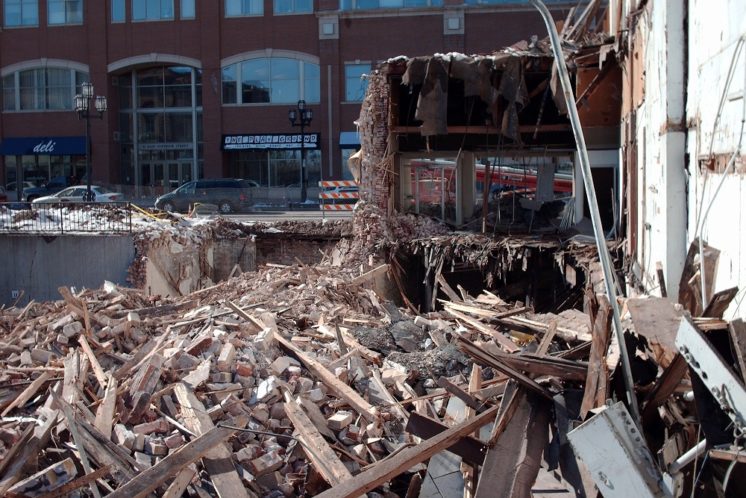 The perspective in the 2007 photo above better shows the debris from the Costello Block demolition, and also offers a glimpse of the Duluth Technology Village in the background. At the time the Tech Village housed the Play Ground, a Duluth Playhouse black box theater that preceded the modern version at the Duluth Depot, which is called the Underground. The vacant Tech Village storefront with the awning that reads “deli,” had been home to the Duluth Athletic Club Deli and later became Takk for Maten restaurant, which closed in 2013.

History Then and Now

The view from Duluth’s “House of Rock”

Perhaps second only to Glensheen Mansion in fame among Duluth homes is the Arthur and Ella Cook House at 501...