According to Wikipedia, pie à la mode was “invented and named by John Gieriet in Duluth, Minnesota, in 1885.” And there seems to be a preponderance of evidence backing up that claim. Yet it’s not a historical tidbit people in Duluth seem to know about.

Is it true? Well, let’s look at the facts and claims involved.

The March 26, 1885 issue of the Duluth Daily Tribune featured a grand opening advertisement for the Hotel la Perl which showed a menu that included vanilla ice cream and blueberry pie. And that, so the story goes, is the oldest known reference to pie à la mode.

Though the Wikipedia entry provides numerous references, none of that support material seems to be available on the internet … until now. This Perfect Duluth Day post is serving as a collecting ground for items helping to prove or debunk the unheralded legend. The first thing we need is a copy of the 1885 newspaper ad. (Update: It has been found and can be seen below in the second comment to this post.

Wikipedia gives the address of the Hotel la Perl as 501-503 W. Superior St. in Duluth, which is where the Radisson Hotel Duluth-Harborview is today. From 1910 to 1961 it was the site of the Hotel Holland.

The Gieriets moved to Duluth in 1885 and purchased the Commercial Hotel, which had been built in 1884 by William Dambruck. John re-named the building “Hotel La Perl.” It was a large two-story wood-frame building with a flat roof. A saloon, that was located on the first floor, was converted into a restaurant and the rear laundry room was remodeled into a kitchen. On the Hotel la Perl’s first day of business, John Gieriet served up a fancy dinner that included French pickles, oysters, French peas, and Lake Superior trout. For dessert, he served warm blueberry pie and vanilla ice cream. Gieriet called the popular treat “pie à la mode.” It was reported in the Duluth Herald that Duluthians in the 1880s often mispronounced the local invention as “pylie mode.” In 1886, the Duluth Weekly Tribune stated the Hotel la Perl had gained a “first-class reputation” under the management of John Gieriet. John continued to operate the Hotel la Perl until his wife became very ill in 1886. He ended up selling the hotel in August of that year.

Additional tidbit from Wikipedia: Hotel la Perl owner John Gieriet was in charge of food service at the White House under the administrations of presidents Franklin Pierce and James Buchanan.

Wiki concludes with more on Gieriet:

Below is another random piece of non-pie-related history referencing Gieriet. It’s from Minnesota Reports: Cases Argued and Determined in the Supreme Court of Minnesota, Volume 57, February 1894 – June 1894. It mentions the Tremont Hotel, which was built in 1890 and later renamed the Gardner Hotel. It still stands at 12 N. Lake Ave. 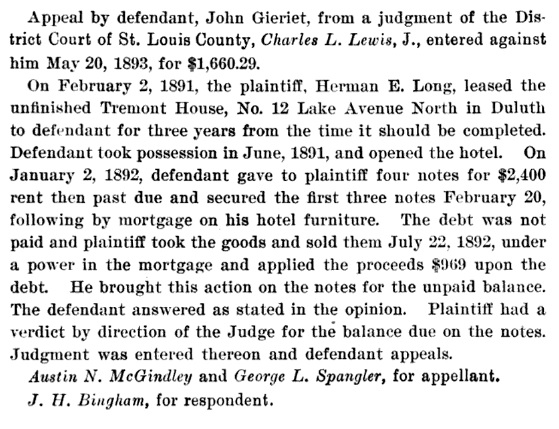