Lobby of the Hotel Holland 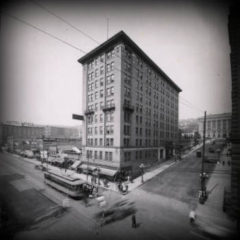 Marketed as “the only fire proof hotel” in Duluth, it included the Holland Cafe, “famous for its service, soda fountain, light luncheons and grill room.”

Note the difference between the postcards below. The one on the left shows the Holland as it was originally built. The postcard on the right depicts how the hotel looked after four additional stories were added. Time for another installment of Perfect Duluth Day’s ultra-thrilling photo-trivia sensation. Where in Duluth was this shot taken?