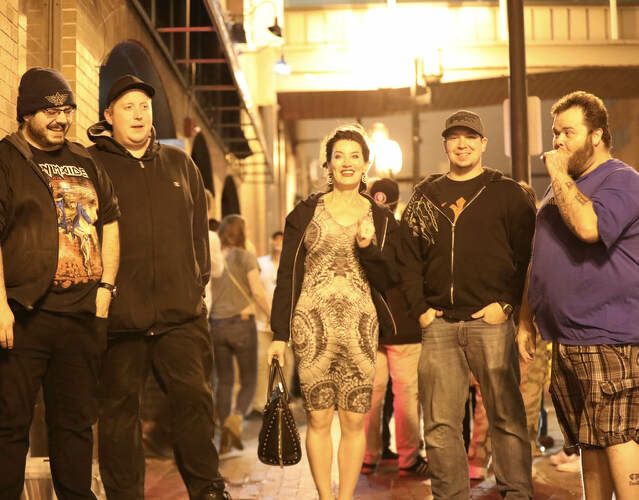 Stand-up comedy is not one of the more glamorous forms of entertainment in Duluth. A group of comedians called High Bridge Comedy is trying to change that.

“We are comedians working on our craft,” said Joe Mosier. “A lot of us are amateurs and some have been doing it for longer.”

The eight comics formed their group about three months ago. They met while performing regularly during weekly open mic comedy events in the Murphy Room at Dubh Linn Irish Pub.

“All of us were coming to Dubh Linn every Friday night, saw it was the only open mic in town,” Meyers said. “We have a passion for comedy and wanted to expand on it. The only way we would get anything done would be to work together.”

Having just one open-mic comedy event in town posed the biggest intial challenge. Gallo said comedians in the Twin Cities have multiple venues to perform at throughout the week, allowing them to become more proficient in their craft.

“There’s not a huge scene for it in Duluth,” said Chad Gallo, “It’s a really hard town to break out in.”

The passion for comedy and the talent they see in each other has pushed High Bridge members to share ideas to improve their craft and promote their offerings. They are constantly working on sharpening their jokes, jotting notes after each set.

Along with hosting the open mic at Dubh Linn, High Bridge recently added an open mic on Wednesday nights at Vintage Italian Pizza in Superior. Both events are free admission, with anyone who might want to try their hand at comedy invited to arrive early and sign up for a performance slot. Each High Bridge member is allotted five minutes to perform; first-timers are limited to three minutes. The material ranges from slapstick to downright crude, with gags ranging from speculation about why the fantasy of being with a mermaid might not be as appealing as it sounds to a story of finding out from a sixth-grade crush how girls go to the bathroom.

That’s all part of the act, according to Zank.

“There’s a little bit of everything,” he said. “We try to have a different style for each person. Some are more PG, some push the edge more.”

Gavin Glenn, a follower of High Bridge Comedy who has performed with its members, said if he “had to put a rating on it, it would be PG-13.” Others might find the vulgarity level a bit closer to an R rating. Each of the performers has a different style of humor that reflects their range of personalities. They frequently engage with the audience throughout their acts. There are also quips about things they experience in their daily lives.

The basic goal of the group is simple — to work together to promote comedy in Duluth and improve the product.

“I hope that we can be putting on shows and festivals,” said Zank, “It’s about being in the spotlight.”

According to Wikipedia, pie à la mode was "invented and named by John Gieriet in Duluth, Minnesota, in 1885." And...