Fifty years ago — Aug. 20, 1965 — the DNT reports the Duluth City Council will consider a proposal to permit “scenic rides on the Aerial Lift Bridge at a fee of 25 cents.”

Clarence E. Maddy, the mayor’s administrative assistant, said in an agenda meeting Thursday that the rides will begin Thursday if the council approves the proposal.

Fencing is being built on the lake side of the bridge on the sidewalk to hold passengers. Personnel will be employed to collect fees and supervise passengers. Rides will be available whenever the bridge is raised or lowered for a vessel.

Maddy said that insurance for the riding program will cost the city $400 a year. The rides will be limited to persons over five years of age.

The plan long has been endorsed by Councilman Donn Larson. He said it will be a tourist attraction for the city and also permit Duluthians to have a beautiful view of their city. He also believes it will raise enough money to enable the city to pay bridge maintenance costs, such as painting and purchase of cables. 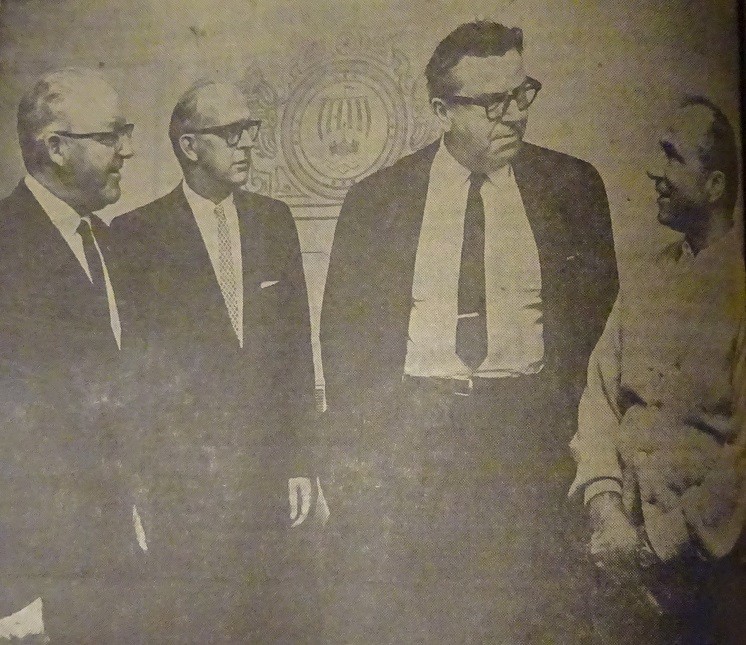 Taconite will be extracted from these big rocks, which are being inspected by Odin Ramsland, Duluth, NEMDA director; Dan Urich, assistant superintendent of the Eveleth Taconite plant, and Emmons W. Collins, Duluth. 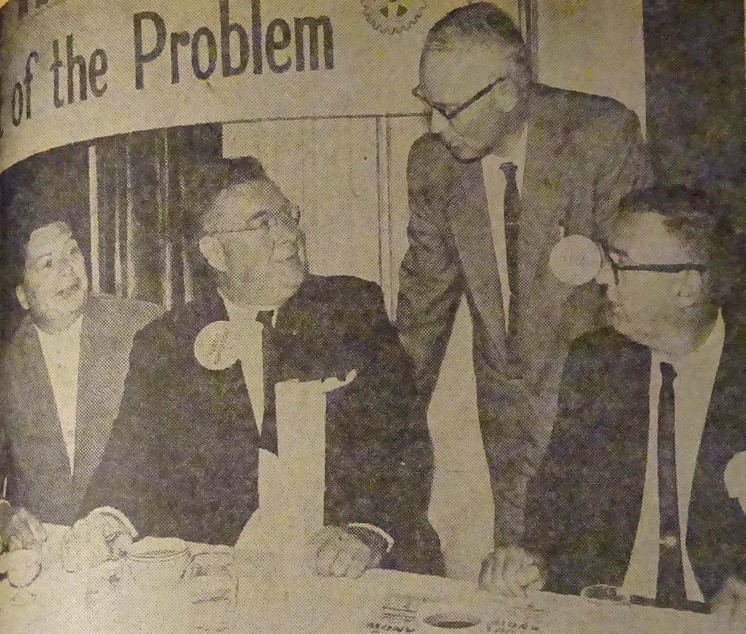 “Throw away the hammer and get out the horn” was the message of two Chamber of Commerce officials as they addressed the Rotary Club in Hotel Duluth Thursday. Conferring before the luncheon meeting are, from left, speakers Marshall Reinig, Chamber president, and O. A. Burghdorf, a vice president, both Rotarians; D. T. Grussendorf, Rotary president, and Mayor George D. Johnson. Prediction Race Slated
Arthur Bero, left, and Manley Goldfine check chartered courses for the Duluth Power Squadron’s annual predicted log race scheduled to begin at 1 p.m. Saturday at the “potato salad dock” near the south end of Park Point. In a predicted log race, each boat skipper is given a course, and he must predict in advance at what time he will complete the course, using only his compass and engine tachometers, the latter to determine the speed of the boat. No timepieces are permitted aboard boats during the race. In past years, winners have predicted the elapsed time of traveling the course within one minute on a cruise lasting several hours. Bero and Goldfine are co-chairmen of the event.

This mighty ore-boat cribbage board, recently acquired at a rummage sale, is not quite as buoyant as one might expect....