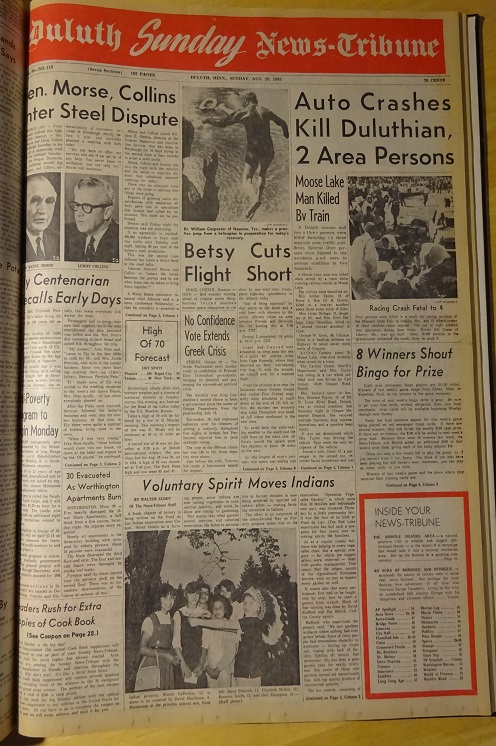 Fifty years ago — Aug. 29, 1965 — the DNT reports “a fresh chapter of history is being written on the Fond du Lac reservation” near Cloquet, where more tribe members are taking to gardening and some are raising vegetables in commercial quality.

This means that what governmental coercion and enforced reservation life failed to accomplish in former decades is now being achieved by spirited voluntary effort — making farming attractive to Indians.

The effort is an outgrowth of the many-faceted War on Poverty projects under was at the reservation. “Operation Vegetable Garden,” in which more than 50 families and individuals took part, was climaxed Thursday by a lively community fair. It was the first of its kind at Fond du Lac. (The Red Lake reservation has had such a program for four years, now involving nearly 200 families). Indian princess Winnie LaPrairie, 12, is about to be crowned by David Mastbaum, 8. Runnersup in the princess contest are, from left: Mary Peacock, 11; Elizabeth Mullen, 12; Rozanne Smith, 12; and Gail Thompson, 11. 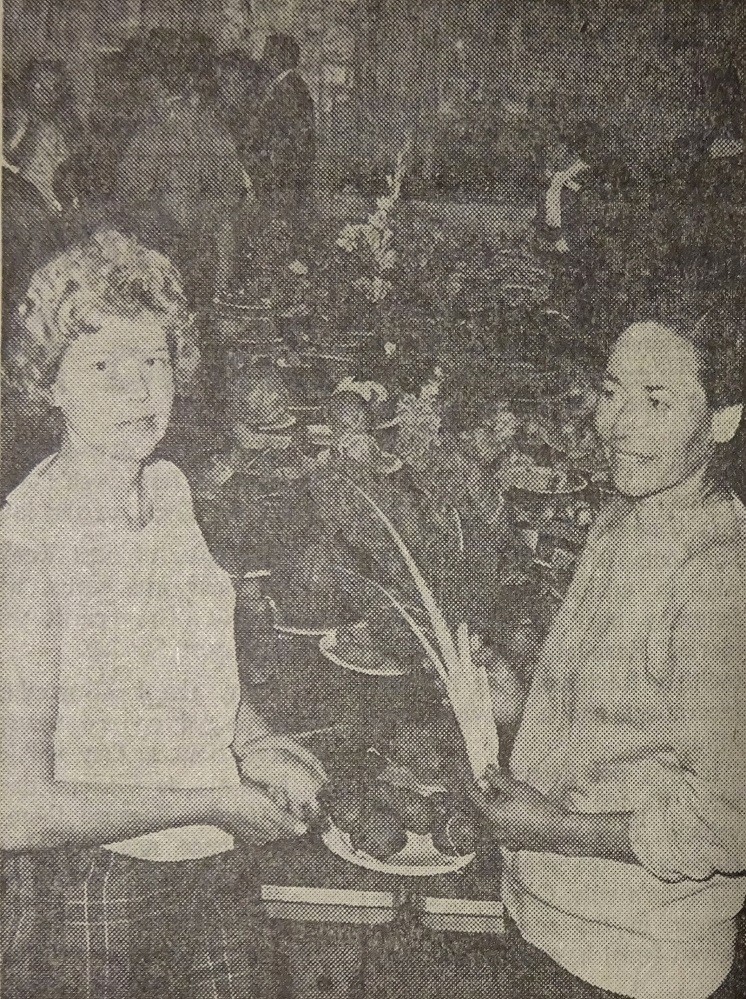 With gifts for nearly everyone at Indian fair at Fond du Lac, Louis Lermen measures Vernon Northrup, 11, for a new belt. Great-grandchildren of Samuel Karon smack their lips over a cake replica of their great-grandfather’s house at 20 E. Second St., which was baked for his 100th birthday party today. They are, from left, Thomas Karon, 10, Cynthia, 1, Susan, 8, and Andrew, 5. They are children of Mr. and Mrs. Richard Karon, 107 Waverly Place, who have invited about 300 guests to the party for Samuel Karon, a prominent Duluth business man and founder of the Adas Israel Synagogue. Don Lindgren, Eveleth, is one of the handicapped workers at the Courage Club’s concession stand. Grain storage operations could begin in less than three months at this new elevator in Superior. Welders are among the skilled workers employed on the grain elevator project. Show tunes and jazz are the stock and trade of this foursome, all Duluthians, who will begin entertaining Monday in the main dining room of the Flame. They are Susan Schaeffer, a Cry-Me-a-River singer who appeared on the Ted Mack Amateur Hour earlier this month; Ron Ahola, drums; Lyn LaSalle, guitar, and Kent Brosveen, piano. They go on at 8:30 p.m. nightly while downstairs in the Rooster Room pianist-singer Ed “Rocky” Rockhold starts to wail at 7:30 p.m. Miles of sand beach stretch along the shore of the Bayfield Peninsula. This view is westward from the mouth of Frog Creek. The ancient rocks of Devil’s Island have been hollowed and scoured for centuries by Lake Superior’s awesome strength. Mr. Magoo, Duluth’s famed Mongoose, autographs copies of his biography which was published a few months ago. Assisting Mr. Magoo are Bruer Hage, acting zoo director, and Mrs. Gloria Hovland. Mrs. Hovland is fund raising chairman for the Duluth Zoological Society which is sponsoring a sale of the book. “The Duluth Mongoose” will be on sale throughout the week at the Duluth Zoo and Friday at Goldfines-by-the-Bridge, where animals from the zoo will be displayed. This 1932 Model B Ford coupe is among favorite model cars constructed by Robert Salnick. Sue Molstad holds one of the many trophies she has won in tennis this year. Tommy Kronquist’s Letter to His Son

https://vimeo.com/137631234 Designer Tommy Kronquist of Medium Control in Duluth tells his story through a letter to his son. Video by...