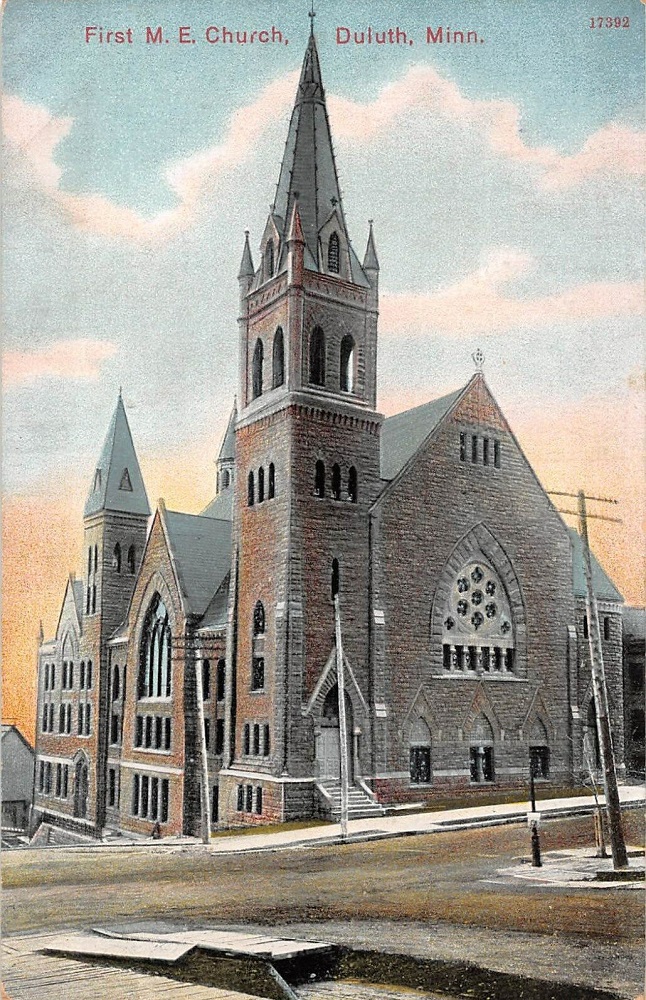 The written message on the back of this century-old postcard is dated Sept. 9 by “Aunt Martha,” but has no postmark or other indication of the year. The card shows First Methodist Episcopal Church on the corner of Third Avenue West and Third Street in Duluth. The building stood there from 1893 to 1969.

First Presbyterian Church of Duluth circa 1870 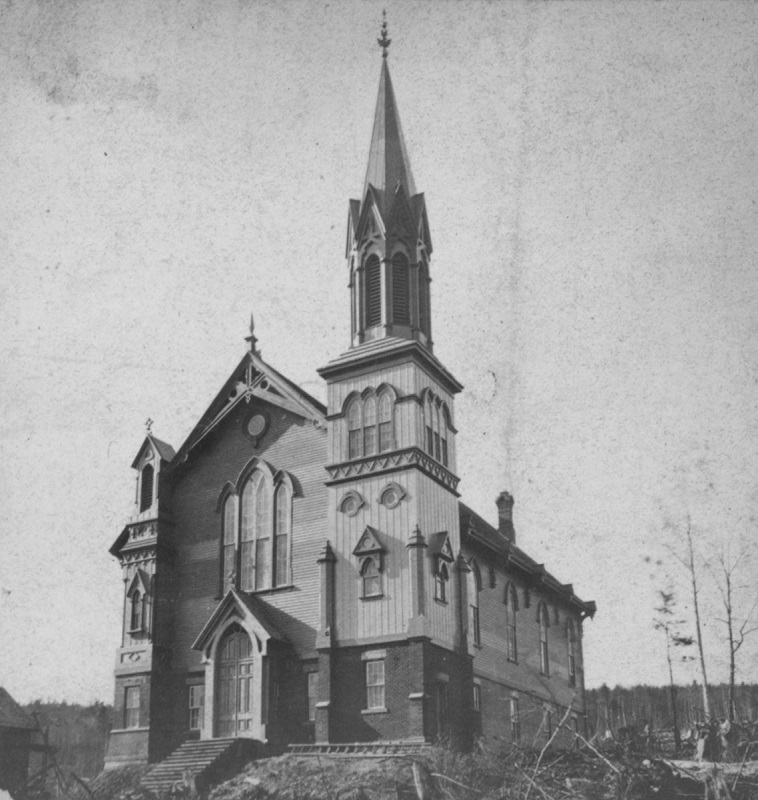 Duluth’s First Presbyterian Church was built at 231 E. Second St. in 1870. It was replaced by a larger building in 1891, across the street at 300 E. Second St., which still stands. The original church was used by other congregations until it was demolished in 1971. The area is now part of the Rainbow Senior Center property.

Fox 21 is reporting that brothers Chuck and Robert Bagley are working on turning the former Bethany Lutheran Church at 2302-2308 W. Third St. into a restaurant. 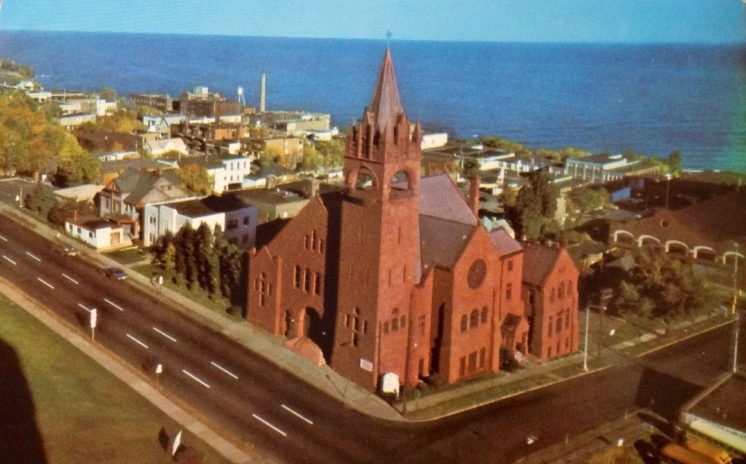 First Presbyterian Church established its congregation 150 years ago today — June 1, 1869. It’s magnificent sandstone structure at 300 E. Second St. was built from 1890 to 1891. The image above is from an undated postcard published by Duluth photographer Robert B. Barrett.

Postcard from West Third Street in 1908 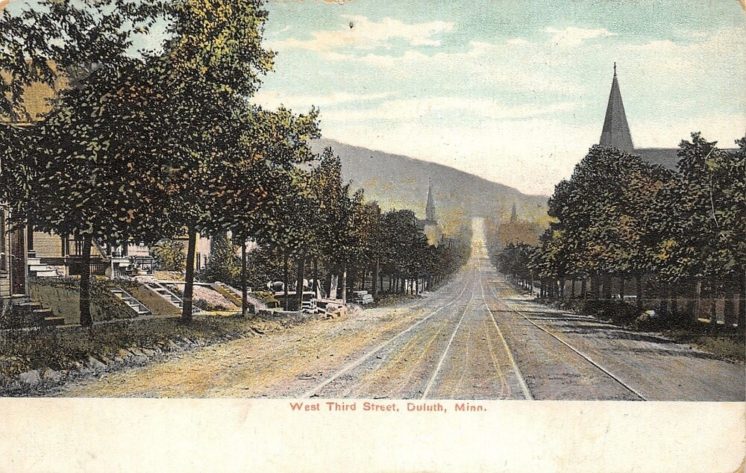 This postcard was mailed 110 years ago today — Aug. 14, 1908. It depicts a scene looking northeast on Third Street at about 24th Avenue West. The church steeple in the right foreground is Bethany Lutheran Church, built in 1903. The postcard image above shows Bethany Lutheran Church at 2302-2308 W. Third St. in Duluth’s friendly West End. The image appears to be circa the 1970s, maybe ’60s. 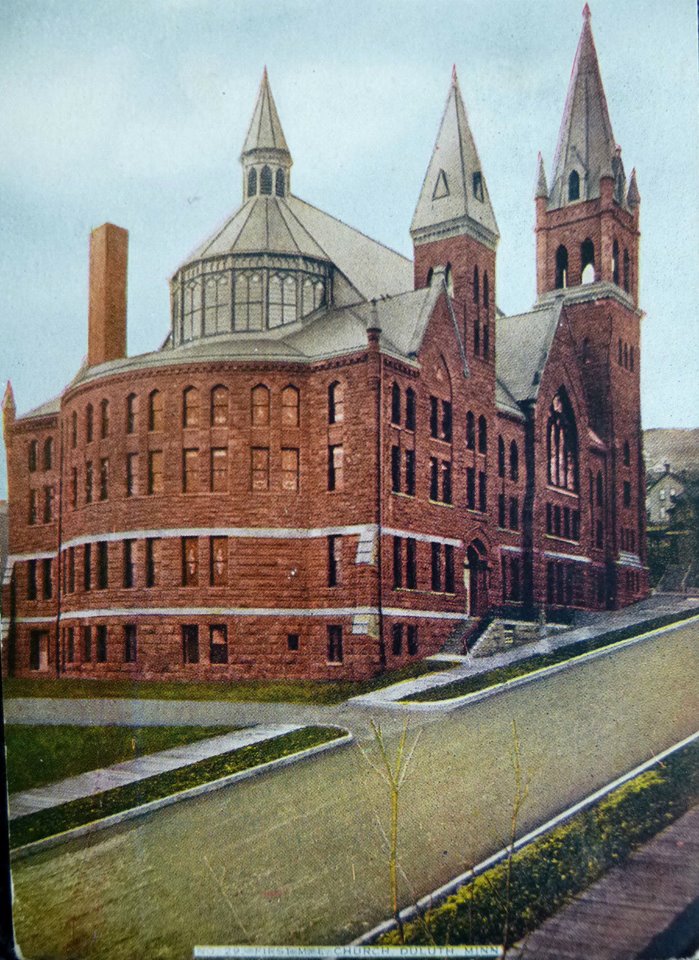 Before there was a “Coppertop Church” in Duluth, First Methodist Episcopal occupied the corner of Third Avenue West and Third Street. The 1,800-seat brownstone structure was dedicated on Feb. 5, 1893, closed in November 1966, and was razed in 1969. It was known as “the Meth” … because those were simpler times.

The new First United Methodist Church was built on seven acres of land on Skyline Parkway bought at public auction in 1959. Construction began on “The Coppertop Church” in 1966, based on architectural designs by Pietro Bellushi.