A look inside a newly-restored building that helped foster the 1990s Duluth indie rock scene is featured in a series of historic property video tours launched on the internet this week.

The Duluth Preservation Alliance explores changes in five iconic properties that once served city businesses and local government during a 2021 Virtual Historic Properties Tour available now on its website. The project provides a first look inside the newly remodeled Northwestern Bell telephone exchange building at 1804 E. First St. — which later housed an unlikely but locally significant music venue called the RecyclaBell from 1993 to 1997.

Other buildings featured on the virtual tour are: For years, the Duluth Preservation Alliance has hosted annual home tours where ticket holders are invited to walk through well preserved historic properties. COVID-19 forced the group to produce virtual home tours in 2020. With health issues still a factor, commercial and government buildings were selected for the online only series in 2021.

“We were like: ‘Let’s take this opportunity of not having in-person events and see how we can switch it up a little,’” she said. “So I think we just decided to go creative and go completely with different spaces than we’ve done in the past.”

A tour guide and camera crew investigate progress at each building. They note architectural details, discuss building history and peak into behind-the-scenes places. The 10- to 20-minute videos and 360-degree walk throughs are free for viewing with a suggested $20 donation.

“I think people are always curious about seeing inside other people’s houses,” said Fortney. “But they’re curious about other buildings too – like the Board of Trade, not everyone gets to go through that or see all the construction as it’s going on.” 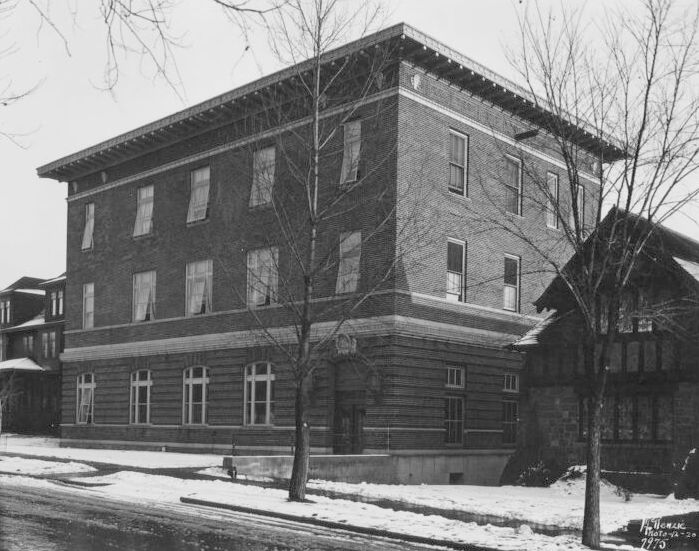 The Northwestern Bell building opened prior to 1920. Operators there connected phone calls in the Endion neighborhood of Duluth. (Photo from the University of Minnesota Duluth’s Archives and Special Collections at the Kathryn A. Martin Library).

Constructed circa 1920 as the Hemlock Exchange building, Northwestern Bell owned the property and housed telecommunication equipment and phone operators in the facility for decades. The building closed in the 1970s and was decommissioned in the 1980s. Joyce and Christopher Campbell purchased the empty building, took up residence on the second floor and launched the RecyclaBell, an all-ages music venue in 1993.

During its remarkable four-year run, the RecyclaBell served as a performance space for live music, video, theater and art of all kinds. Countless bands performed on a small ground-floor stage under high ceilings and concrete walls.

Alan Sparhawk and Mimi Parker formed the band Low in 1993 and staged their first two performances at the RecyclaBell. The group recently released its 13th full length album, “Hey What,” on Sub Pop Records and is planning an international tour in 2022.

Sparhawk said Low opened for three other bands and performed four songs. “We had just formed a month before,” he said. “The scene at the time was mostly high school students, a few college students, a few 20-somethings and the old couple who owned it.” The Campbells created a welcoming and creative space where youth could get together, hang out and express themselves, said Sparhawk.

“It was an exciting time,” he said. “Alternative music had just exploded and people were excited about going to shows and forming bands. It was pre-internet, so people just went to see whoever. Perfect environment to be creative and extreme.”

Jason Wussow was 19 when he moved from rural Alexandria, Minn. to Duluth and discovered the RecyclaBell. He helped build a stage, promoted shows and performed with his band Flux Skapacitor in the building.

“It was just really, really cool,” said Wussow. “It was like a youth center actually in some ways. I did a lot of shows there and even have some old scrapbooks with photos and posters.” Wussow said the room was a concrete echo chamber that resembled a bomb shelter. But dozens of local and touring bands played in the space and hundreds of kids would turnout for shows on the weekends.

“It was this huge room with like 300 people and just crappy old TV speakers. No one had any money, we were just high school kids or starting college.”

Three years after landing at the RecyclaBell, Wussow purchased his own building and started a coffee shop and music venue in West Duluth now called Wussow’s Concert Cafe. He credits the Campbells for their work promoting Duluth music and arts.

“They not only lived there but they gave this youth center thing to the community,” he said. “They were amazing.”

Located in the largely residential Endion neighborhood, The RecyclaBell dealt with inevitable noise and disturbance issues before it closed in 1997. Joyce Campbell encountered health issues around that time and died in 2007. Christopher Campbell died in 2020.

After several new owners and failed attempts to renovate it, the Bell building sat vacant for years before developer Mike Poupore purchased it in 2015. St. Louis County records show Poupore paid $285,000 for the Bell Building and a home behind it at 18 N. 18th Ave. E. The Bell Lofts parking lot is located behind the two buildings.

Poupore said he has long been attracted to the building for its history, architecture and neighborhood location. It is one of five early exchange buildings constructed by the telephone company in Duluth.

“I’ve been watching this building for about 25 years,” he said. “I’ve watched the different owners come through and when it came available five years ago, I thought: Now it’s time. The price is right. The numbers are right.”

Poupore spent three years developing a plan that would reuse the property. On the virtual tour, Poupore leads cameras through the building — still undergoing renovation. Each 500-square-foot apartment features 16-foot-high ceilings, an open floor plan, loft space and massive windows overlooking the neighborhood. Amenities include indoor bike parking, a pet wash, a workout room, party room and laundry on both floors. Rents will be around $1,000 a month with occupancy available early in 2022. The Bell Lofts apartments feature both lake and hillside views from the Endion neighborhood of Duluth. (Photo by Mark Nicklawske)

Fortney said the project is a wonderful example of how to bring new life into an old, historic structure.

“I think it’s great to show the space because it’s something that may have been more business or commercial but is now being made into apartments,” she said. “With all the affordable housing talk that’s going on and just housing issues in general in Duluth, it shows that we can be creative with our historic spaces.”

“There are people doing great things to our historic infrastructure. I feel like sometimes when people hear historic preservation, they think ‘expensive’ or ‘too involved’ or ‘out of reach.’ This is really showing that it’s not. There are tools out there. There are developers out there, business owners that really do value the historic integrity of the city of Duluth,” Fortney said.