Duluth’s Ten Most Endangered Properties in 2021 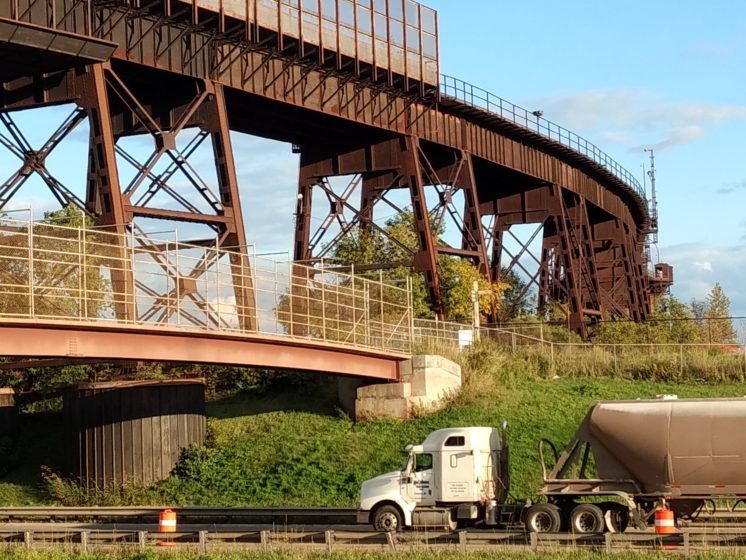 The Duluth Missabe and Iron Range Railway Dock #5 has not been used since 1985. The Duluth Preservation Alliance has listed it as an endangered property. (Photos by Mark Nicklawske)

A slowly disappearing neighborhood rich in Native American history, a large building once home to a radical labor college and an iconic, unused iron ore dock are included in a list of places historians fear may disappear from the Duluth landscape.

The Duluth Preservation Alliance released a Top 10 Most Endangered Places list during an event outside the soon-to-be demolished Esmond Building in Lincoln Park Saturday, Sept. 25. The list, regularly compiled by the group, is designed to raise preservation awareness and encourage the reuse of historic properties.

“We hope this proclamation prompts the city of Duluth to make preservation a core value,” said Duluth Preservation Alliance Vice President Blake Romenesko in a news release. “We’re rapidly losing our community’s history. The very same neighborhood character that’s touted as an asset for tourism is being neglected across our city with several buildings slated for demolition.”

Duluth Preservation Alliance members compile an informal list annually but this year an Endangered Place Committee was formed to research buildings, historic sites and neighborhoods. A list of 30 at-risk locations were narrowed down to 10, said Romenesko.

“This time there was more of a bigger involvement and we put it out there much more loudly,” he said.

Three of the buildings on the list have active demolition plans. Others have been neglected by current owners or are abandoned properties leading to uncertain futures. The group also recognized locations that have an overlooked history and may be vulnerable in the future.

“Some of them we’re going to lose and there’s not much we can do but their history still matters and we want to share their stories,” said Romenesko. “Others may be less threatened and we kind of want to bring those histories to light so they’re more protected in the future from being lost.”

The National Trust for Historic Preservation compiles a similar list on a national scale every year.

Romenesko said Duluth is rich with historic properties that deserve preservation but without protection those properties could be lost.

“I think we’re kind of spoiled. I think we don’t appreciate it as much as we should,” he said. “It’s like ‘Oh, we lose this building, well, we still have all these other great buildings here.’ Slowly that gets chipped away and then the quality of this infrastructure becomes less and less.”

The Duluth Preservation Alliance would like to see the city establish an ordinance that would prevent at-risk building owners from allowing properties to fall into disrepair for easier removal and redevelopment. Some cities enforce a demolition by neglect ordinance designed to enforce structural standards for historic buildings, said Romenesko.

The following locations are listed from west to east with comments from the Duluth Preservation Alliance researchers: 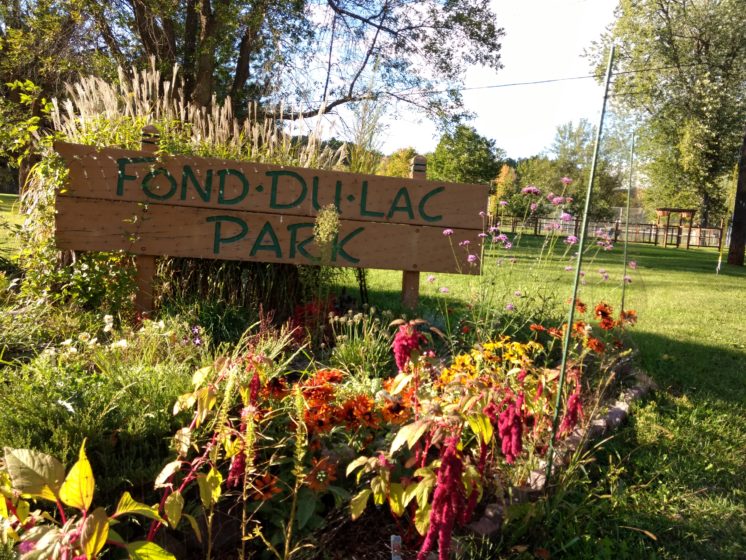 Fond du Lac is the oldest neighborhood in the city of Duluth and an early home to the northland’s indigenous population.

The site was an important Ojibwe center located on a key St. Louis River canoe route from the 16th to the 19th centuries, and it became the location of a fur trading post, a mission, and a place where the U.S. negotiated two important treaties with Ojibwe leaders. The first official town in modern-day Duluth was Fond du Lac. Duluth’s oldest house stands in the neighborhood and was built by Peter J. Peterson in 1867.

In the 20th century, Fond du Lac became a recreational center where Duluthians went to
swim or boat in the summer and ski jump in the winter.

As an example of its unrecognized history, an indigenous cemetery was recently disturbed by a state transportation department project and is now in the process of restoration under the stewardship of the Fond du Lac band of Superior Ojibwe. 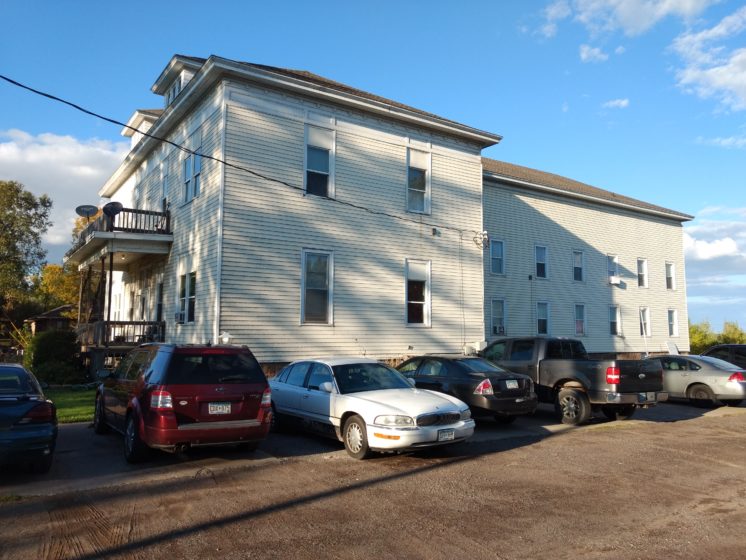 The Work People’s College building was constructed in 1913 and is now divided into apartments.

Built in 1913, The Work People’s College was one of the very few, and likely the earliest, formal labor schools in the country. The school was associated with the Industrial Workers of the World, a radical labor union, and taught classes on socialist thought and union organizing, as well as more conventional liberal arts. Classes ceased in 1941. The building, overlooking the St. Louis River, is now divided into apartments.

The Duluth Missabe and Iron Range Railway Dock #5 has not been used since 1985.

Built in 1914 by the Duluth Missabe and Iron Range Railway, Dock 5 was the first non-wooden iron ore dock in Duluth. It was the largest dock of its kind on the Great Lakes and could load 25,000 tons of iron ore into a vessel in about two hours. Dock 5 ceased active use in 1985, and has stood unused ever since. Fraser Shipyards Inc. scrapped the ore chutes from the dock in 2012. The Esmond Building in Lincoln Park is slated for demolition. A new mixed-use housing development is planned for the site.

The name Esmond is stamped into the concrete above its entrance, but before the building was completed, the name was changed to Rex Hotel. It was built for Duluth Brewing and Malting Co. as one of its many branded hotels with a taproom that served only the company’s beer. The building changed names a number of times in the decades after until it became the Seaway Hotel in 1959. The building is an important part of Duluth brewing history, an industry that has recently helped revive the West End neighborhood. The historic Pastoret Terrace and adjoining Paul Robeson ballroom have fallen into disrepair. A fire damaged the property in November and its future will be determined in court.

Pastoret Terrace was originally a grouping of six upper-class townhouses designed by Oliver Traphagen in 1887. Traphagen was the premier architect of the Duluth boomtown era in the late 19th Century. In 1924, the Pastoret went under remodeling with the removal of the turret’s pointed roof and the addition of a lower level storefront that would later become the Kozy Bar. The townhouses were divided into numerous apartments.

The building is listed on the National Register of Historic Places. A fire broke out in the building in 2010. The owner lost the property to the county as a tax forfeiture. The city of Duluth (Duluth Economic Development Authority) acquired it in 2013 and intends to demolish it. Another fire destroyed much of the roof in February, 2021. The fate of the building will be determined by the courts. The St. Regis Flats have been designated unfit for habitation.

This building currently has 18 units of affordable housing. However, due to lack of heat,
the building has been designated unfit for human habitation. The 1910 census shows early residents being predominantly white collar clerical workers. They were also all either Americans, first generation Americans, or immigrants from northern European countries and Canada. Built sometime in the late 19th Century, the building was the home of, and a saloon operated by, German immigrants Gottlieb and Paulina Krause. Most recently it was Last Chance Liquor and Wine, which operated out of the building for decades. It is one of the few wooden storefront commercial buildings remaining in Duluth. It is planned to be demolished for the Brewery Creek Apartments development.

Built in 1899, the building currently has 21 units of affordable housing including the non-original “motel” addition on the front of the property. A recently abandoned plan to demolish the building as part of the Brewery Creek Apartment project could easily be reinstated. 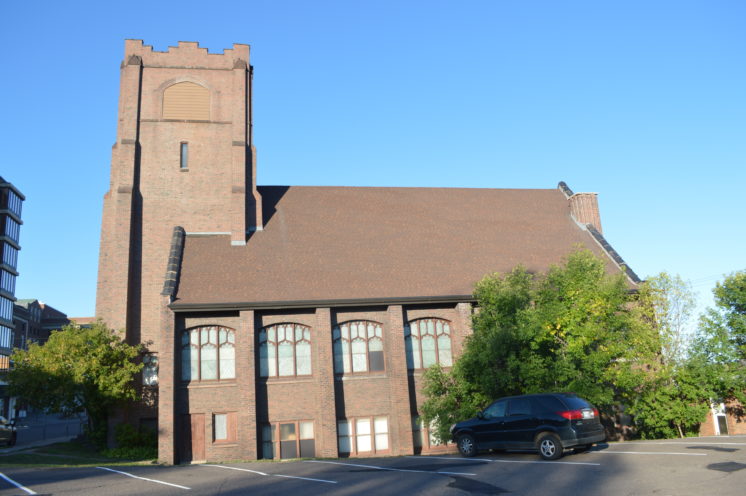 A Tiffany stained glass window is located in the abandoned First Baptist Church.

Built in 1908, the original congregation merged with another in 1919, changing its name to United Baptist Church. The main focal point in the sanctuary is a large Tiffany stained glass
window depicting the appearance of Christ to Mary Magdalene. Another fixture in
the sanctuary is a 16 rank Kimball pipe organ. Today, the church appears to be unused. 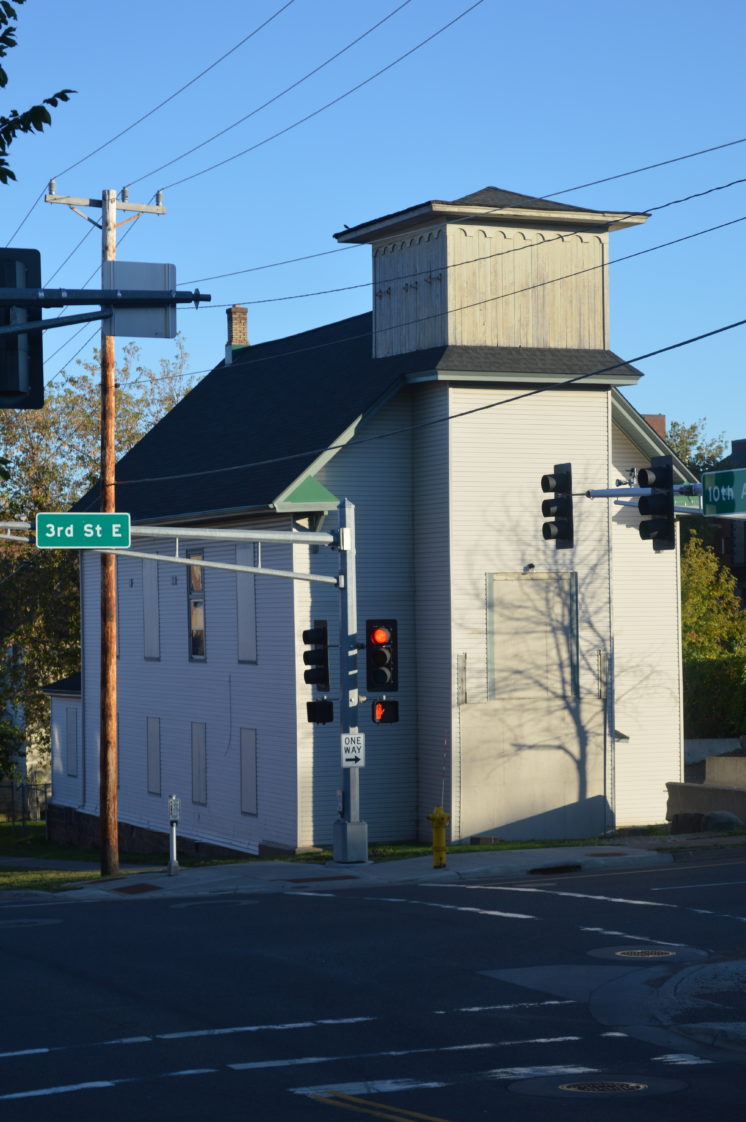 ​​This is the oldest church in Duluth. It housed a large bell cast from a cannon used in the
Franco-Prussian War. The bell was presented to the church in 1874 by Kaiser Wilhelm I of
Germany. The congregation became Peace Church in 1959, leaving the building and taking the bell. The church steeple was removed when the building was remodeled into apartments. It sits empty today.