Tom Buresh and his terrier-dachshund mix, Evealine, pose on a hill outside the historic Millen mansion on Vermilion Road. Buresh and his wife Debra purchased the home in October 2017 and are restoring the property. (Photos by Mark Nicklawske).

Tom Buresh likes to say that shortly after he bought one of the most glorious and historic mansions in Duluth a neighbor told him it came with 40 years of deferred maintenance.

Buresh, and his wife Debra, purchased the former Dr. Joseph and Fran Leek estate at 1618 Vermillion Road in October 2017. The approximately 9,000-square-foot home, built by lumber and railroad baron John Millen in 1912, was big, beautiful and in bad need of a makeover.

The Bureshes went to work immediately.

“When we bought it, the roof was leaking in four places,” he said. “We had it replaced in 10 days.” This recently uncovered historic photo shows the main entrance to the Frederick German-designed home as it was in 1917.

In the past two-plus years the home has seen complicated chimney restoration, tedious window and door repairs, carpet removal and floor sanding, a new back patio project, historic wall reconstruction, preparations for a new kitchen and enough tree and brush removal to keep a crew busy for days.

“It’s a labor of love, I’ll tell you that,” said Buresh. “I do a lot of research and come up with my own solutions, in some cases. We try to keep it as historical as we can yet sometimes you just can’t do it that way. It’s a balance.”

According to the Duluth Preservation Alliance, the historic Millen mansion was designed by prolific Duluth architect Frederick German. The stone, stucco and brick home — accented in timber — took two years to construct on a sloping 2.3-acre Tischer Creek site. It has five bedrooms, six bathrooms and five fireplaces.

Millen lived in the home for two years before his death in 1916. After two other owners, the Leeks purchased the property in 1962 and the house remained in the family for 55 years.

Buresh, a retired Wisconsin accountant, said he and his wife were living in New Glarus, Wis. and looking to relocate closer to family. Interested in a historic home, they looked at more than 100 properties online and toured about a dozen in places like Eau Claire, Chippewa Falls and Wausau.

“We didn’t really find anything that tripped the trigger,” he said. “Debra went to school in Superior, so she took a look in Duluth and found this place.”

Buresh said he was instantly attracted to the treasure trove of elaborate Duluth mansions produced during its Turn-of-the-Century building boom.

“The houses here are phenomenal,” said Buresh. “Architecturally it’s pretty incredible. The history of this home. When I saw the woodwork in here I just went: ‘Wow … wow.’” A study features lots of wood panelling and leaded-glass windows.

“I expect that the multiple choices of exterior materials and the wingspan design were done purposely to make a very large home appear as a collection of cottages and not a boastful architectural statement,” said Lamkin in a recent e-mail. “Placing the home at the brow of a hill — rather than on the crest — is an architectural technique sometimes employed to take best advantage of a site and to minimize its impact on the natural landscape. Of all of the homes designed by Frederick German, this one is the best integrated to the site.”

Lamkin has given advice and offered contractor suggestions during the restoration. He said Buresh has done much of the work himself and has sourced many unique parts and pieces for the project. 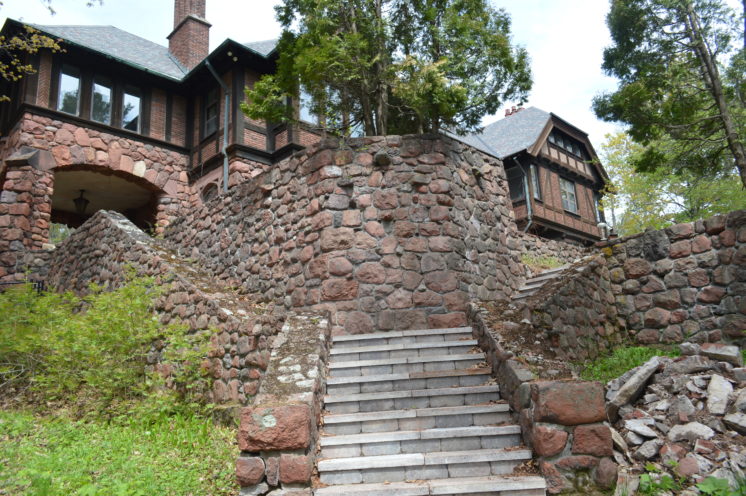 Steps that accessed a former garden space have been restored using new stonework.

“It is very important that the historic homes and mansions of Duluth be preserved and restored as a testament to the history of our area through stories and architectural legacy,” said Lamkin. “Duluth was home to many of the most influential men of the iron mining industry. It is the story of these entrepreneurs and their courage to develop the iron mines which shaped the United States.”

But maintaining and restoring a century-old building can be expensive and difficult.

The Bureshes purchased the home for $730,000 and hopes to keep renovation costs under $500,000 through hard work and creativity. A driveway retaining wall, damaged in the 2012 flood, is being restored and moved back into place.

For example, a driveway retaining wall — heavily damaged in the disastrous 2012 flood — is being restored by simple pick and shovel work before calling in heavy equipment. And Buresh spent two weeks repairing huge, inoperable, lead-glass pocket doors between the main entry hallway and living room.

A new rear patio is being constructed using stone reclaimed from the Nicollet Mall renovation in downtown Minneapolis. An upper water garden will feature a sculpture of the Greek god Pan, found in New Jersey and hauled to Minnesota in a van. Buresh has even taken window repair classes through Rethos, an organization dedicated to old home restoration.

“The key here is you try to get help when you can and knowing when to write a check,” he said. “I’m just trying to be patient with it because there is so much to do, like I said, you don’t fix 40 years of deferred maintenance in a couple of years.”

Touring the grounds, Buresh said he will do what he can and pass it on to the next owner.

“It will never be done,” said Debra Buresh. 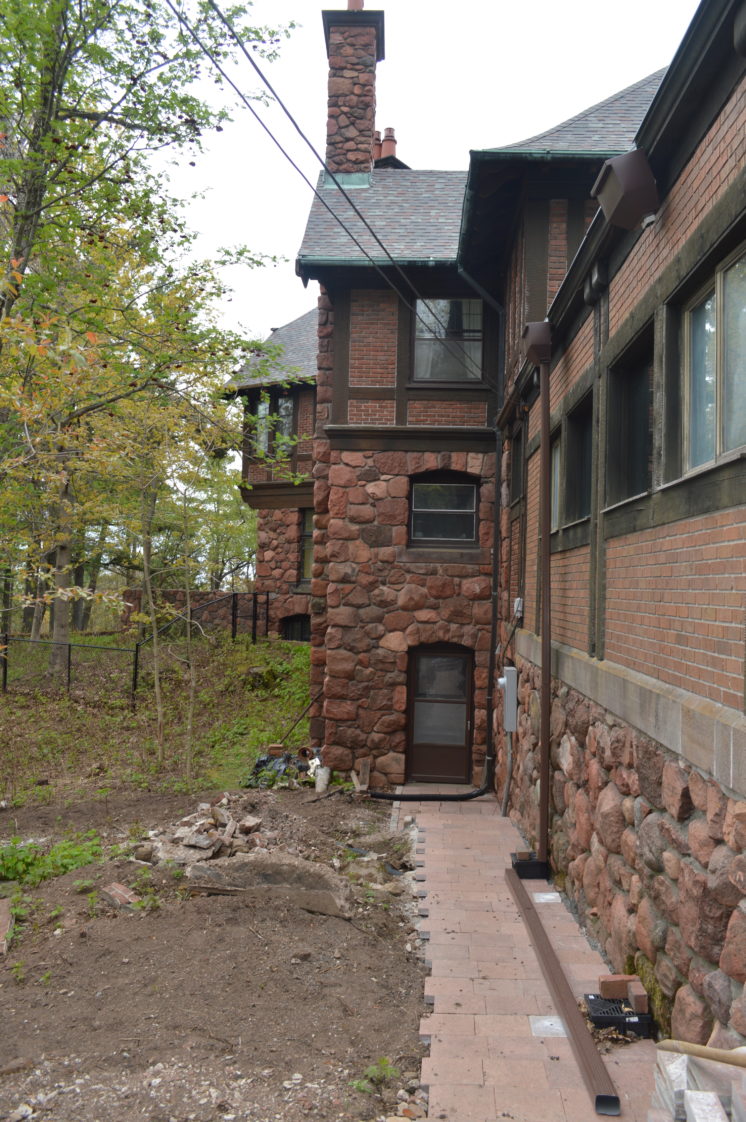 A back patio is being installed using granite stones reclaimed from the Nicolette Mall renovation in downtown Minneapolis.

https://www.youtube.com/watch?v=DoxMfRO-Hlc I directed this debut video for Duluth singer/songwriter King Garbage, aka Eric Lester. The song is "A Garbage Journey"...