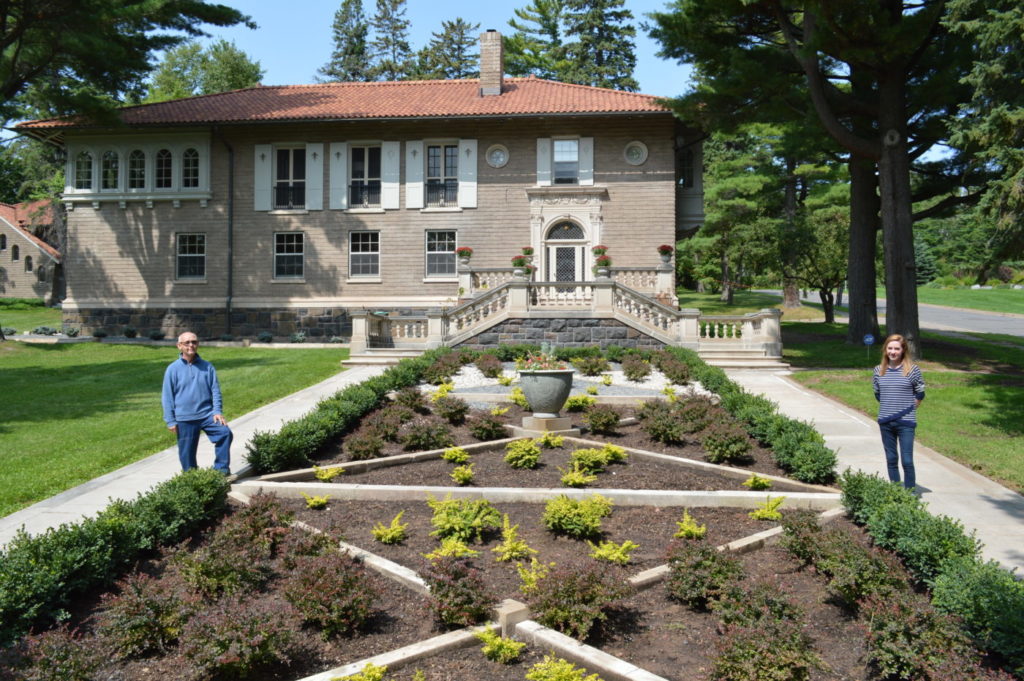 The largest art museum in Duluth started on the first floor of a Chester Park home but the glamorous history was hardly recognizable when Jared and Leslie Broadway purchased the property six years ago.

“It was just a room you passed through to get upstairs,” said Leslie, as she led visitors into the 103-year-old Tweed House at 2531 E. Seventh St. “Jared had his exercise equipment down here.”

Working with Duluth preservationist Dennis Lamkin and a stable of contractors, the couple transformed the dreary ground floor basement back into a place for treasured art and lively social gatherings. The public will get a rare look at the historic gallery during the 32nd annual Duluth Preservation Alliance Historic Properties Tour on Sunday, Sept. 17.

While the roots of the Tweed Museum of Art on the University of Minnesota Duluth campus were formed in the George and Alice Tweed home decades ago, its Neo-Renaissance design also features a sprawling outdoor space; beautifully crafted, tree-top living rooms and attention to detail that could only happen during the Turn-of-the-Century Duluth construction boom.

The Broadways, from Arkansas, were drawn to this architectural history as they began house hunting. Jared, a neurosurgeon, had accepted a position with Essentia Health and the young couple wanted a unique place to live and start a family — their daughter Susanna was born shortly after the move. The restored gallery space at the Tweed House. George and Alice Tweed showed their vast art collection here before establishing the Tweed Museum of Art on the University of Minnesota Duluth campus in 1958

The Tweed House was a perfect fit.

“We were just charmed right away,” said Leslie. “I got all those feelings that you get when you walk in the door and you know it’s the right place.”

But the old house needed work.

The Broadways renovated the kitchen right way, then later connected with Lamkin to tackle the more expansive lower level and outdoor space.

The new gallery includes a side bar that looks like it was cut out of a Restoration Hardware catalog. An adjacent front foyer features a pair of restrooms that were brought back to life with mirrors and wallpaper; and a hidden kitchen-prep area was redesigned for catering services. An access hall was covered in brilliant peacock wallpaper and bright blue wood trim.

“Isn’t this amazing,” said Lamkin, as he looked across the new front gardens. “There was never anything formal here before, it was just grass.” The Tweed House is unusual in that there are no living quarters on the ground floor. The front foyer, at the bottom of the stairs, serves as a lobby for art gallery space.

Lamkin found masonry from an old Willmar, Minn. hospital to establish the garden between two parallel front sidewalks. The new plantings, crushed rock and stonework looks like it was always part of the house.

“I feel thankful everyday,” said Broadway. “Basically it was Dennis who was there to bring it back to what is was supposed to be inside and out. He’s been wonderful.”

Lamkin, a longtime Duluth Preservation Alliance board member, has led similar historic home renovations over the years. He said approximately 75 early 20th Century mansions are still sprinkled across Duluth and many need improvements.

“It’s important to preserve Duluth history,” he said. “The interest in our architectural history and our cultural history is growing. It’s bringing in visitors and drawing new residents.

Like its microbreweries, mountain bike trails or Canal Park, old homes are part of what make Duluth unique, said Lamkin. “I love them and want to see them preserved.”

The Duluth Preservation Alliance Historic Properties Tour gives ticket holders access to five historic buildings not normally open to the public. The self-guided tour runs from 11 a.m. to 4 p.m. on Sunday, Sept. 17. Tickets are $20 and available through the Duluth Preservation Alliance website or from 10 a.m. to 1 p.m. at the Fitger’s Brewery Complex lobby on event day.