Rich Hoeg is a naturalist, photographer and children’s book author. His blog, 365 Days of Birds, provides daily updates on the birds and animals he follows, as well as an occasional post about his human activities. In Selective Focus this week, he talks about how his other interests have influenced his wildlife photography.

RH: Unlike most photographers who like to use DSLR’s and big lenses which are heavy with lots of reach, I chose to use a “super zoom / bridge” camera. I wanted a camera setup which allowed for easy portability whether birding, bike touring or cross-country skiing. This decision was driven by a decision to retire from the traditional work world (I was a software techie) at the somewhat young age of 57. My wife and I had planned a 2,500 mile self-supported two month bicycle tour of northern New England, the Canadian Maritime Provinces and the St. Lawrence River from its mouth to Quebec City. A large camera would have been impractical and heavy in my bike panniers. Amity Great Horned Owl Family – The Great Horned Owl checks up on here owlets this past April. This family of owls lives just north of Duluth, and I have watched them since the parents first nested in February.

Many people ask photographers what settings they utilized for a particular photograph. While this is useful data, the key behind any image is the artist, not the equipment. A good photographer who understands a camera’s limitations can take great photos even with a mobile phone. 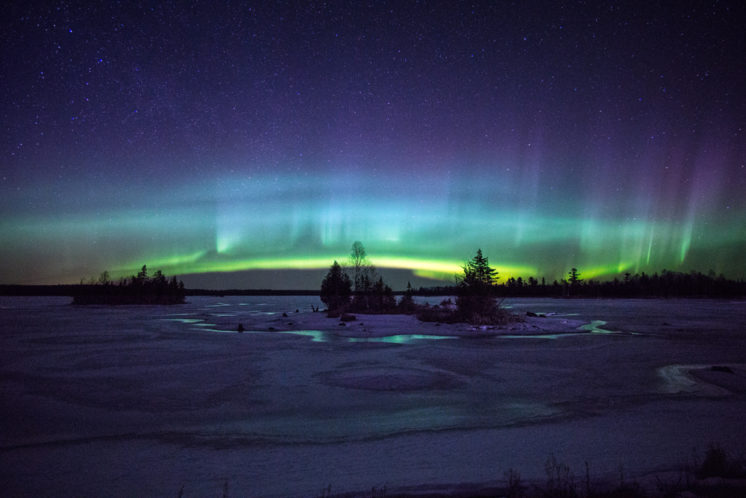 Boulder Lake Northern Lights – In mid March of 2017 I spent almost an entire night out on the ice of Boulder Lake (near Island Lake a bit north of Duluth). The Aurora Borealis was really dancing, and the colors of the Northern Lights reflected in refrozen snow melt ice.

My bike ride, The Grand Gaspe Tour, which was seven years ago, is when I purchased my first bridge camera. I have never regretted my camera decision even understanding that my photography focus at present is more on bird photography. While I still take a month long bike tour every year, almost every day will see me hiking or skiing forest trails with my camera. I also take a daily bicycle ride during the warmer months … camera and monopod always included! Fox Kits Playing in the Sun – Spring means watching young fox kits venture out of their dens for the first time to play in the warm sun. These kits grew up near the Lakewalk in Duluth.

My reward is being out with nature every day. It is relaxing to experience the Boreal Forest of Northeastern Minnesota. Since mid February I have had the great fortune to watch a family of Great Horned Owls … from when they first nested in February to the owlet’s first flights two weeks ago. However, having a rewarding experience like watching and photographing my owl family is not easy; lots of preparation and hard work is required. This past December and January I took many, many hikes long after dark through deep snow listening to my Great Horned Owl parents calling to each other. Eventually I triangulated from their “hoots” the location of their nest. Thus, wildlife photography requires an individual to learn habitat. As a Sax-Zim Bog volunteer naturalist I have been lucky to learn from, among others, one of the best … Sparky Stensaas. Rescuing Silver the Snowy – While hiking late one fall day three years ago near Silver Creek, I found an injured Snowy Owl. After receiving instructions by phone from the Hawk Ridge Bird Banders, I had captured the owl (huge talons!), and then proceeded to drive 60 miles to a wildlife rehabilitation center. Unfortunately I did not have a cage, and the Snowy Owl thought being wrapped up in a blanket while being driven to the rehab center was not desirable. This made for a very interesting drive as I was by myself. I finally convinced the owl to settle down …. a loooong story for another day.

I maintain my own web site, from which I welcome anyone to download my images at no charge for private offline use. My work for magazines and my children’s books provide me the needed income for my photography work. My work and writing is often featured in Lake Country Journal, and occasionally in Lake Superior Magazine and Adventure Cycling.
My web site: 365daysofbirds.com
My image index (best work): 365daysofbirds.com/photo-index Splitrock Sea Smoke Shipping – This past January 16th, the last Laker of the season streamed past our famous lighthouse. The American Spirit had sailed a route down Minnesota’s Northshore to avoid strong NW winds which would have caked up the ship with ice. The air temperature was -17F when I took this photograph 20 minutes before sunrise. Using a Marine App the previous night to track the ore boat I had learned this image was possible if weather conditions held … and they did! Thus, I arose long before sunrise to be in position when the ship sailed by in the pre-dawn light.

During the Covid-19 Pandemic I have made free PDF downloads of all three of my children’s books available: 365daysofbirds.com/birding-with-children

The best manner in which to view my work is by subscribing to my blog via email or RSS. I post new entries approximately 4+ times per week.

I maintain a YouTube site where I publish brief videos of the birds and animals I encounter in the Northland: youtube.com/user/rhoeg 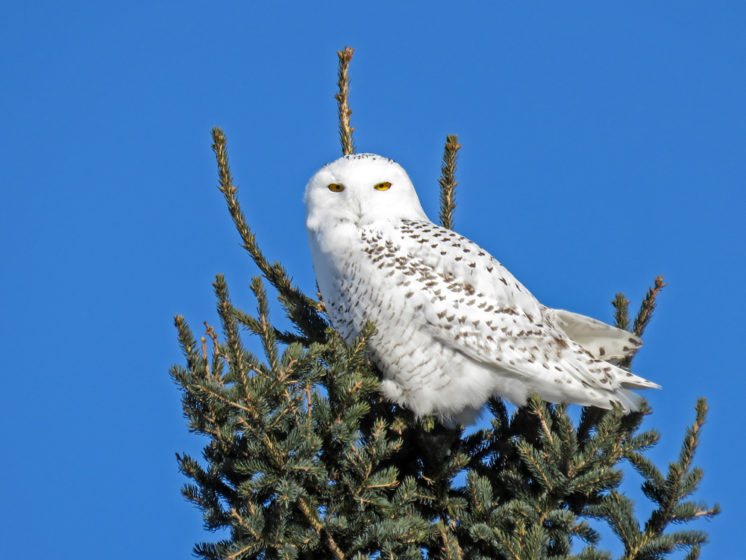 Pine Tree Snowy – Every year I enjoy watching visitors who winter on the Arctic Riviera (i.e. Duluth!). Birds like Snowy Owls visit our region from November to March. I found this beautiful female in Clover Valley between Duluth and Two Harbors.

I am working on a new children’s book with the title: Do You Hoot? This book will tell the story of the Amity Owls and growing up in the northern forest. The book should be released by Labor Day. The Coronavirus Pandemic has limited my ability to travel which included a planned photo shoot of Barn Owls in Nebraska, and working as a lighthouse keeper on an island in the Bay of Fundy. One particular challenge I faced recently was being diagnosed with a rare vision disorder which made me functionally blind when outside. While there is no cure, treatment has allowed me to resume my outdoor lifestyle albeit with some limitations. My most recent effort was having the photographs I took last summer while bicycle touring in the Norwegian Arctic featured as part of a prime story my wife wrote for the national cycling magazine, Adventure Cyclist.

Tom Buresh likes to say that shortly after he bought one of the most glorious and historic mansions in Duluth...