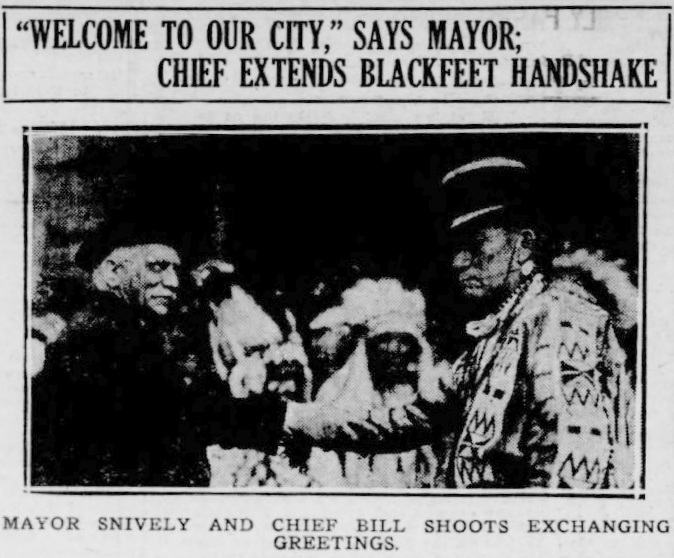 On May 4, 1921 — one hundred years ago today — newly elected Duluth Mayor Samuel Snively welcomed to the city five chiefs from the Blackfeet Tribe of Montana.

The affair was covered in the following day’s Duluth Herald. The text of the short article is below.

“Welcome to our city,” says mayor; chief extends Blackfeet handshake
Indian warwhoops and war dances were featured on Duluth streets yesterday for the first time since Duluth was a wilderness, when Mayor S. F. Snively extended welcome to five Indian chiefs of the Blackfeet tribe. The mayor was given the handshake of brotherhood and was entertained with a war dance and an Indian warwhoop. The big chiefs, fresh from the Glacier National Park reservation, are playing in the prologue, “The Legend of the Last Stand,” in connection with Marshall Neilan’s “Bob Hampton of Placer” at the New Garrick. The Indians were released from the reservation by the United States government to appear in this prologue and $1,000 guarantee was placed by the First National Exhibiters’ circuit to insure the safe return of the chiefs and their party.

It’s not completely clear in the article, but the “prologue” seems to have been a live show that preceded the film Bob Hampton of Placer. Note the rampant racism of the time required that a cash guarantee be placed to assure the “safe return” of Blackfeet performers, who had been “released from the reservation” to tour with the film release. 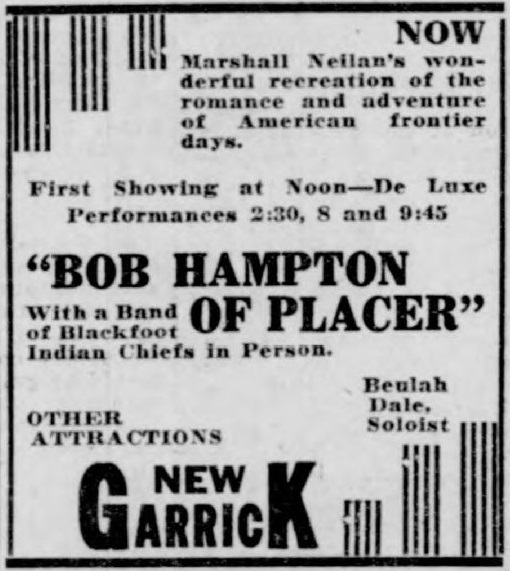 https://www.youtube.com/watch?v=rBVUC1z1dX8 This clip from The Tonight Show features guest host Jay Leno showing the evolution of an ad in the...