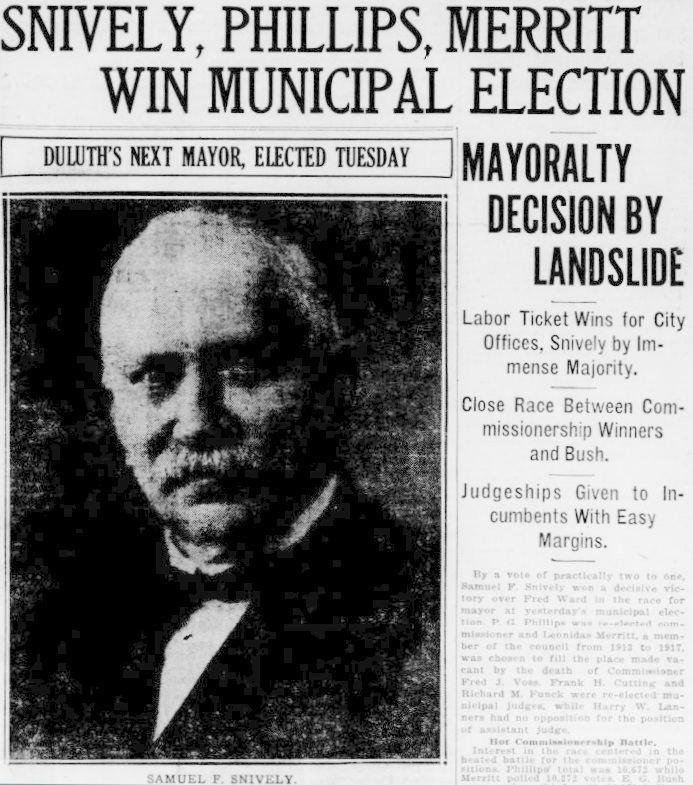 On April 5, 1921 — one hundred years ago today — Samuel Frisby Snively was elected mayor of Duluth. He held the office for four terms spanning 16 years. Duluth has had two three-term mayors who served for 12 years, John Fedo and Gary Doty.

Snively is best remembered for his quest to beautify Duluth, in particular his push to complete Skyline Parkway. Duluth’s Magney–Snively Natural Area was named after Snively and another Duluth mayor, Clarence Magney.

Below is the text from the Duluth Herald’s report on the election from the following day, April 6, 1921.

By a vote of practically two to one, Samuel F. Snively won a decisive victory over Fred Ward in the race for mayor at yesterday’s municipal election. P. G. Phillips was re-elected commissioner and Leonidas Merritt, a member of the council from 1913 to 1917, was chosen to fill the place made vacant by the death of Commissioner Fred J. Voss. Frank H. Cutting and Richard M. Funck were re-elected municipal judges, while Harry W. Lanners had no opposition for the position of assistant judge.

In the mayoralty race, Snively’s vote reached 13,896 while Ward was given a vote of 6,813. More than 80 percent of the men and women who voted cast a ballot for Judd Cutting, whose total reached 16,061. Judge Funck received 13,359 votes, while William Windom, who held the position before the late Judge Smallwood, came in a poor third, with 7,637.

The result of the election is a complete victory for the men endorsed by union labor organizations. The Lincoln club was the organization that drafted the losing candidates for the mayoralty and the commissionerships.

Between the time of the primaries and the general election yesterday, an active campaign was waged by the losing faction, centering mainly on Mr. Phillips. That it was partially successful is evidenced by the fact that Commissioner Phillips’ lead in the primaries of more than 3,000 votes over Mr. Bush was cut down to 401. Mr. Merritt also increased his total vote considerably.

Although Mr. Merritt’s lead is only 101, Mr. Bush declared today that he did not intend to ask for a recount. It was Mr. Bush’s first entry into politics. He was endorsed by the Lincoln club entirely without his solicitation and much to his surprise.

it is noticeable throughout the returns that the winners’ strength lay in the central and western sections of the city. Reports from these sections were the first to come in last night and for a
while it appeared as if Mr. Phillips and Mr. Merritt both would win in a walk. Early in the morning, however, the East end began to pour in its figures. The mayoralty was never in doubt, but for several hours it seemed probable that the early returns on the commissionerships were likely to be overthrown

Walter Borgen, county auditor and former city clerk, was back in his old job directing and handling the returns at the city hall. Headquarters of the various candidates were also open all night long, receiving the reports of the various precincts.

A number of the city hall employees were kept busy last night in the clerk’s office compiling returns, and the city hall was very quiet today.

New members of the council will be sworn into office Monday, April 18. They will decide among themselves as to how the positions will be distributed. It is considered practically certain that Mr. Merritt will take Mr. Voss’ place as commissioner of public finance and that the other places will
remain unchanged, with Mayor Snively succeeding Mayor Hugo as commissioner of public welfare.

During his first term Mr. Merritt was commissioner of public utilities, the place now held by Mr. Phillips. He was not a candidate for re-election in 1917. Members of the council will decide in private session how the places will be distributed and will vote on it formally at their first meeting on April 18.

If Mr. Merritt becomes commissioner of finance he will have the appointment of a city auditor, city treasurer and license inspector. Mayor Snively has the appointment of a superintendent of parks. The most important appointments are those of city attorney and city assessor, which are made by
the whole council.

Mayor-elect Samuel F. Snively today issued the following statement of appreciation to the voters of the city:

“Permit me to express my gratitude to my friends and supporters for the generous support they gave me.

“I have no desire at all to exult over the defeat of Mr. Ward, my rival. During the campaign our personal relations were very friendly and I hold him in high esteem.

“At all times during the contest I was more concerned over the responsibilities of the office than my own election.

“I am only one of our people delegated to act as the official head of the city. There are many vexing problems to solve, calling for the fairest and frankest treatment, so that the solution thereof may be for the best of our city as a whole and the people at large.

“I shall do my best as an official to cooperate with all to this end and ask the friendly counsel and support of all who with me have the highest and best interests of our city at heart.”

P. G. Phillips’ statement follows: “I am very grateful indeed for the splendid support given me by the voters in this election. I look upon it as a vote of confidence, and I shall use every ounce of energy I have to deserve it, and to repay it with loyal service to the best interests of the community without regard to party or class and without discrimination. I shall take the same interest in the work in the next four years that I have in the last four years, and with the same purpose; to give the community the best service there is in me.”

“In expressing appreciation for the splendid support given me yesterday at the polls by the men and women voters of the city, I am prompted to acknowledge with gratitude the loyalty of organized labor and of the old settlers and also of the young men and women voters whose verdiet proves again to me that they all indorsed my independent and unpledged stand in regard to the interests of all of the
people.”

Fred Ward, defeated candidate for mayor, expressed himself as follows:

“I wish to publicly congratulate Mr. Snively on being elected to the high office of mayor of Duluth.

“I want also to thank all of my friends for the good hard work they did in my behalf.

“The people of Duluth have picked the man they want for mayor and it is up to every good citizen to throw away the hammer and get behind and boost. Minnesota All Hockey Hair Team 2021: Go with the Flow

https://www.youtube.com/watch?v=DEWpRjhtHko Masks, a global pandemic and no cameras on the ice for intros. Hockey hair video maker John King did...