Albert Heyroth gets electricity out of air in 1921 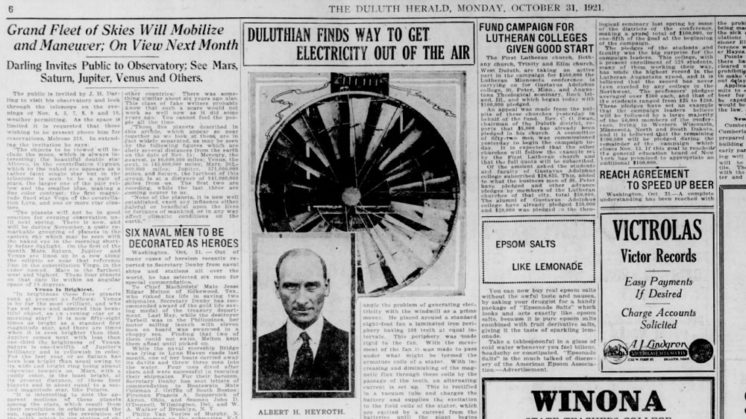 West Duluth was the scene of windmill experiments a century ago, according to a story in the Oct. 31, 1921 Duluth Herald. Albert Herman Heyroth was hard at work at 55th Avenue West and Raleigh Street attempting to generate electricity for home energy use.

Heyroth had already obtained a patent in 1917 for his “Wind-Wheel Electric Generator.” At the time he filed for the patent, in 1916, he was living in Geraldine, Mont.

Below is the text of the Herald article and Heyroth’s patent specifications.

Duluthian finds way to get electricity out of the air

Electric light and power for the suburban home and farm by a simple attachment to the ordinary windmill is the result attained by Albert H. Heyroth, a Duluth inventor, after a year’s work in his laboratory at Fifty-fifth avenue west and Raleigh street. The first plant he erected, until it was taken down recently for further improvements, supplied all the current required by a Woodland avenue home for a period of more than four months. The operation of the plant for three hours a day was found sufficient to replace all the current which had been taken from the batteries during the previous twenty-four hours. The plant began charging at five miles an hour. Sixteen cells provided this home, which is equipped with all the electrical appliances, for ninety hours with no operation of the plant.

Mr. Heyroth attacked from a new angle the problem of generating electricity with the windmill as a prime mover. He placed around a standard eight-foot fan a laminated iron periphery having 108 teeth at equal intervals. This periphery was made rigid to the fan. With the movement of the fan it was made to pass under what might be termed the armature coils of a stator. With increasing and diminishing of the magnetic flux through these coils by the passage of the teeth, an alternating current is set up. This is rectified in a vacuum tube and charges the battery and supplies the excitation to the field coils of the stator, which are excited by a current from the batteries until the plant begins charging.

Engineers for the last quarter of a century have attempted to gear up a windmill to the standard generator, but the loss of power in transmission, cost of manufacture or trouble due to exposure of the parts to the weather is said to have made plants impractical. Mr. Heyroth has simplified the mechanism of the windmill by throwing away the pump jack, so that mechanically the mill used is simply the fan with its iron periphery, brake and vane. The stator, which Is supported above the fan by a post set in the turn-table and which consists of two sets of coils, is covered with a copper housing and sealed. There is nothing on the tower which requires attention except the fan, which will need oiling. Its fuel, the wind, is free. It is designed for the suburban home and farm and the small rural community where the demand for light and power is not enormous. Its manufacture will be begin in Duluth as soon as a factory organization can be perfected. N is for Nostalgia: Peak Bradbury

When my father died, I had a surrogate dad waiting in the wings: the work of Ray Bradbury. I was...