What’s not to like about Duluth Grill? It’s a truck-stop style diner in the friendly West End neighborhood that buys from local farmers and grows some of its vegetables around its parking lot in raised-bed gardens. Owner Tom Hanson and his family have plans to build an urban orchard on the lot as well, with plum trees, black-cap raspberries, lingonberries, choke cherries and other deliciousness. They even get their honey from hives on the roof of the building. Duluth Grill is much more than a simple breakfast joint, but readers of Perfect Duluth Day strongly agreed in a recent poll that it is indeed the best breakfast restaurant in the area.

Is it the Scotch eggs? The breakfast stir fry? The curried polenta skillet? The smoked salmon omelet? The caramel apple French toast? Yes, yes, yes, yes and yes. It’s all that and more.

The video below, from 2008, highlights Duluth Grill’s sustainable practices.

You’ll note the old video shows an Embers sign on the restaurant. The Hansons bought Duluth Grill twelve years ago and opened it as an Embers franchise. Over the years they worked in their own recipes and eventually pulled out from under the Embers umbrella completely.

Below is a video produced by Ethan Walker in 2011 for Lake Voice News in which Tom Hanson talks about Duluth Grill’s homemade ketchup.

In 2010, Duluth Grill was featured on the Food Network’s Diners, Drive-ins and Dives program, with host Guy Fieri sampling the grass-fed bison pot roast and banana creme pie. (For some reason that segment does not seem to exist on the Internet.) 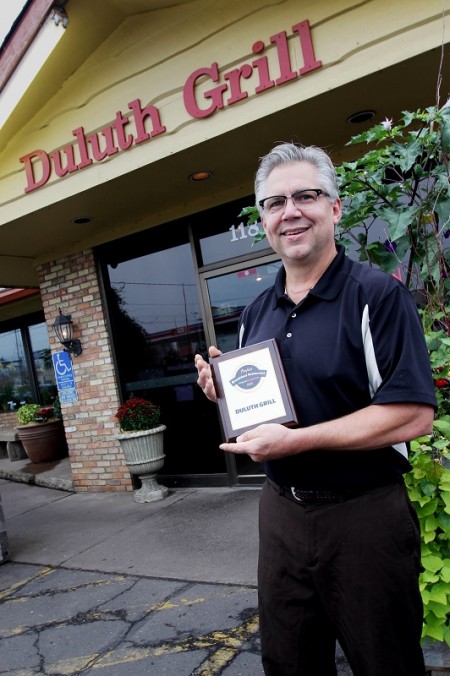 Searching for Sophie’s Wreck (and Failing)

httpv://www.youtube.com/watch?v=lmjg18c56AQ There's a small boat wrecked off the 2600 block of Park Point, nicknamed Sophie's Wreck after the girl who...