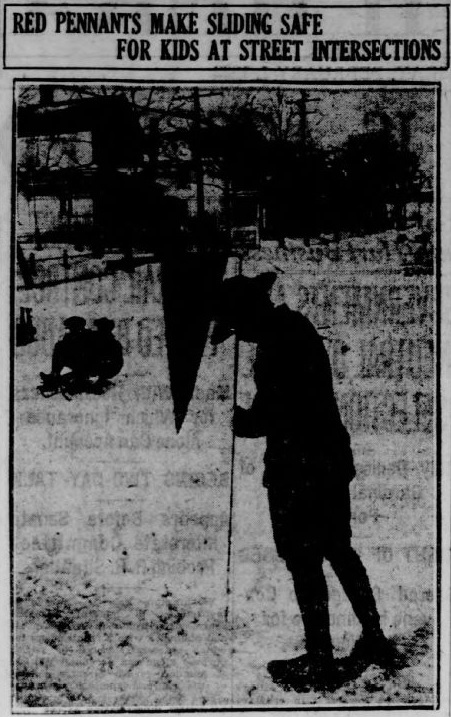 An update to the post “Sledding Duluth’s Avenues in 1921“:

By 1922 it was determined that the safe thing to do is hang red pennants to warn drivers about popular sledding intersections.

One hundred years ago there were far fewer cars on Duluth’s streets, but it was still considered dangerous to sled down the city’s steep avenues. So Duluth Police Chief Warren E. Pugh surveyed the city and selected a few recommended avenues that posed “the least danger to life and limb,” according to the Duluth Herald of Nov. 22, 1921.

The Slice: Sliding at Pinehurst Park “Are you the announcer or something?”

Corey was standing a few feet from the sled run when she spoke; one hand on her hip, her other mittened hand trying to wisp away the strands of hair run renegade from under her cap.

Corey was 8. She often cut to the heart of matters with me, her nattering uncle — curt queries snapping her into adult demeanor, leaving me bemused and suddenly self-conscious.

“I’m just trying to make this more exciting, like we did when I was a kid.”

Corey only half-listened and then belly-flopped onto her plastic glider, tucking the tow rope under her purple parka. “Push me far this time,” she gasped. One-two-three and she zoomed off.

Her cousin was trouncing up the hill, excited for another run.

“Did I get the world record? Is that the farthest anybody got ever?”

“Ever. Now get snug to the front. Josh, you’ll never beat Corey with your rope hanging out like that. You gotta be smart. It’s the intangibles that get you to the top.”

He only winced. Another three-count and Josh grinned as he slid away. Corey was still at the bottom of the hill, eating snow while flat on her back, feet kicking in the air. I was happy to see her once again acting her age.

I remember fondly tubing down a hill on Seven Bridges Road. You used to be able to rent tubes from the chalet. They have a nice lighted trail system for cross-country skiing at Lester Park. What would be needed to get the sled hill going again? Today’s report is from Lincoln Park. It was well packed down yesterday, and frozen rock-hard today. So, the speed on the way down is totally out of control, and the ride is full of solid bumps that threaten to permanently damage one’s sphincter ani externus muscle.

Can anyone recommend a good spot to take the kids?