There generally isn’t a lot to say about a good hike, nice weather and beautiful scenery. They are enjoyable, but they don’t help create a classic story one tells his friends about and sits down to record in an essay. Good stories involve things not happening as planned. Something must go very wrong, very right or very strange to have a good story. If someone shows up in green underwear, for example, it at least provides the foundation.

So before I write about the numbers and geography of my hiking, let me assure you that green undies are coming up.

If you’ve been following along on my North Country Trail in Wisconsin series, you know I’m slowly hiking 214 miles across the Badger State. I started in 2017 and as of this writing have completed 65 miles, taking my sweet time.

In the summer of 2020 I hiked from Pattison Park to the edge of the town of Gordon and ended part four of my essay series there. I thought I was done for the year, but just a few days after publishing the essay I headed back to Gordon for one more trek.

This was at a time when COVID-19 cases were in decline and wearing a mask was voluntary at most restaurants. But it was still before vaccines were available, so the threat level was probably at “elevated” but not quite “high.” I decided to play it safe the night before my hike and order a pizza-to-go from a local bar, wearing a mask while doing so.

On my way in I crossed with a guy on his way out who promptly sat at a picnic table and lit a cigarette. He then decided to appoint himself the position of Town of Gordon Welcoming Committee Chairman.

“We don’t wear those fucken things here,” he said to me, obviously referring to the mask I was putting on.

In retrospect, it would have been funny for me to take my pants off and walk into the bar in my skivvies, as if that’s what he was referring to, but the notion didn’t occur to me in the moment. Besides, green undies turn up later in this essay, so it’s probably better I didn’t spoil my upcoming anecdote by doubling up on underwear stories.

Anyway, you might think Welcoming Committee guy was hoping I would acquiesce to his bandwagoning peer pressure and take off my mask, but I don’t think that’s really what he wanted. It’s more likely he wanted me to start crying about science and how we’re all going to die. Then we could have a nice debate about the most boring topic of 2020, which unfortunately is also still a thing in 2021.

What I did was say, “Oh, O.K.,” and then proceeded to continue wearing my mask while doing whatever the hell I wanted. That ended up working perfectly, because it resulted in not slowing down at all to spend another second in conversation. I know a lot of people enjoy arguing about things, but I prefer pizza. The Acknowledge and Ignore Method got me what I wanted in the most efficient manner. Once my pie was in the oven I was free to chit chat with other people outside the bar about more interesting things than mask politics.

My end-of-2020 hike was a simple seven-mile stroll down Jackson Box Road through the Empire Swamp grouse-management area. The only eventful thing that day was crossing a woman who stopped and chatted enough for me to learn we were living reverse lives. She was hiking north and her husband was picking her up later. I was hiking south and my wife was picking me up later. Those kind of interactions happen often on a national trail system, but this was the only time I chatted with someone else who bothered hiking the roadways connecting the trail system, so I feel a special bond with a woman I talked to for two minutes on a gravel road at a swamp. Jackson Box Road could be considered more of a trail than a road. I hiked from one end to the other and saw one hiker and zero automobiles.

The vast majority of the first 53 miles of the North Country Trail on the western side of Wisconsin are highway hikes where a trail hasn’t been built yet. My first trek of 2021 would finally get me off the road and into the woods. I had a little less than two hours of highway hiking left before reaching the Moose River Trailhead, however, and there will still be more highway segments ahead, but after Moose River the roadways interrupt the trail only in short spurts.

After crossing Moose River the trail runs along the St. Croix River, and suddenly the true hiking experience sets in. I’m out in the woods, in nature, away from traffic, and for nearly a mile I hike without seeing another human being. Then, in the distance, I can see a woman wearing a pink hoodie, wading ankle-deep in the river. She appears in my field of vision for just a moment, between trees, and is soon out of view as I continue on.

My thoughts drift away and very quickly I’ve forgotten all about her, but then I look up and see I’m approaching a log-and-stone cabin. Have I mistakenly left the official trail? There’s an old man sitting at a picnic table, and the woman … well, she must be here, too, maybe even in my peripheral vision, but I can’t give her any attention because the man at the picnic table is wearing green underwear.

“Oh, I’m sorry, did I lose the trail by mistake?” I ask as he looks up and notices me.

“Huh?” is his typical old-man response.

“I was hiking on a trail and ended up here,” I repeat, trying to verify if I’ve walked into private land and am interrupting an afternoon at a family cabin. “Did I wander off the trail?”

I take that response as an indication the cabin is not his and he wandered in just like me. He must have been wading in the river with the woman before I got there, and that’s why his pants were removed.

Taking a moment to regard the cabin, I notice that it’s pretty old, but also large and well built, with a massive porch. I start to get the feeling it’s abandoned and left for hikers to explore, but having suddenly shown up at an underwear party leaves me feeling awkward and I decide to follow the trail out. The last pang of potential lost opportunity hits me just before I disappear in the woods, so I stop to take a photo of the cabin. 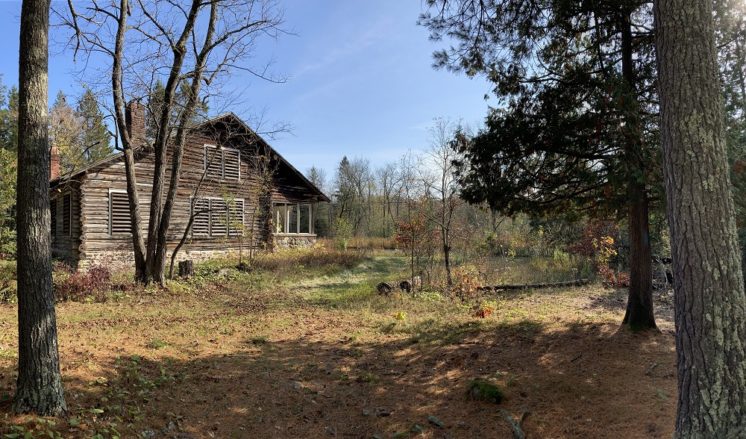 The Gibson Cabin on the St. Croix River.

A little online research tells me what I came upon is known as the Gibson Cabin. Apparently it belonged to a Duluth family, is more than a century old, and the door is wide open for explorers. So I clearly missed a chance to poke around an abandoned cabin.

After an 11-mile day I met my roadside pickup, but returned the following weekend to camp at the Gordon Dam and hike another sixish miles. 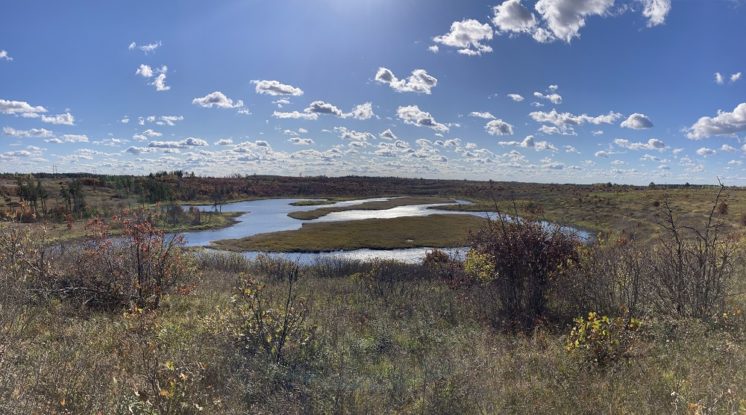 Not reading up on the area or studying maps carefully led to critical errors on both hikes. If I knew the cabin existed, I could have explored it. On my final hike of 2021 I knew I was going to come out of the woods at Highway 53 and follow it to Lucius Woods County Park. What I didn’t know is that there is an “Old Highway 53” business district route I was supposed to walk on. Instead, I walked in the ditch alongside the main state highway, which is obviously a thing that sucks to do and is also stupid.

It’s easy to skip over the advance research, or “presearch” as I call it, because there’s a feeling the adventure will never start if one fixates too much on preparation. There’s also a sense that it’s more adventurous to allow for some surprises rather than know what’s going to happen before it happens. Afterall, the moral of the story here is that if all I did was hike there would be no story. We need wrong turns and green-grundy surprises to keep life interesting.