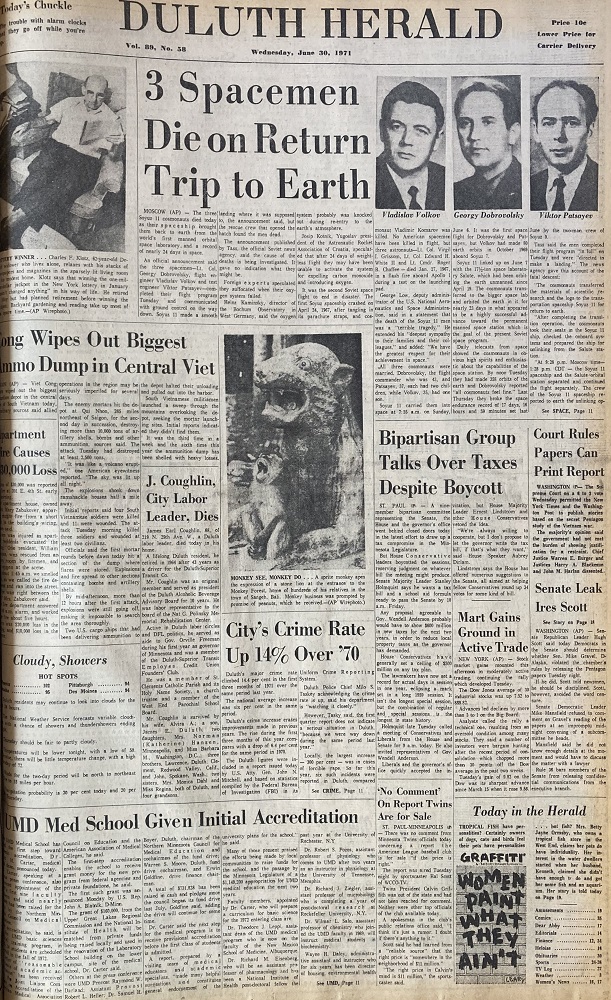 The University of Minnesota Duluth’s medical school took its first step toward academic accreditation 50 years ago. The June 30, 1971 Duluth Herald reported that Dr. Robert E. Carter, medical school dean, announced a letter of “reasonable assurance of academic accreditation” had been received from the Joint Liaison Committee on Accreditation of the American Medical Association Council on Education and the American Association of Medical Colleges.

Dr. Carter also mentioned the appointment of the first nine faculty members during a press conference that day.

Also in the news: Mrs. Betty Jayne Ormsby converted her hobby of breeding tropical fish into a business, opening a fish store in Duluth’s West End. And we conclude this look at June of 1971 through the Duluth Herald with some notes from Bruce Bennett’s sports column. The American Wrestling Alliance had a four-bout card scheduled for July 3 at the Duluth Arena, and Bennett landed an interview with Rolland “Red” Bastien, one of the headliners. Bastien and Hercules Cortez were the reigning AWA World Tag Team Champions and were set to face challengers Larry Hennig and Lars Anderson in Duluth.

Bastien and Cortez were somewhat new champions, having won the titles from Mad Dog and Butcher Vachon on May 15 in Milwaukee. Scenes from a match between the two teams is available on YouTube, but it is not the match in which Bastien and Cortez won the belts.

Bennett asked Bastien about the championship victory. “Well, the night was THE highlight of my career, up to now.” Bastien said. “There were people everywhere. The crowd was bigger than the Milwaukee Bucks drew the night they won the pro basketball championship. After the match was over, it was complete chaos. People were jumping out of the balcony trying to get into the ring; everybody was in the ring. The police couldn’t contain the people! I never saw the Vachon brothers after that. I don’t know what happened to them or how they got out of there. Somehow I managed to get back to the dressing room, but it was 20 minutes before Hercules could get through the mob. And we were the ‘good guys.'”

What led to the wild crowd?

“It was just the fact that so many times the Vachon brothers had somehow escaped with the title — and that’s just about it — through skullduggery most of the time, that the pent up emotions of the fans just exploded when the title finally changed hands,” Bastien said. “For this match, president Stanley Blackburn of the American Wrestling Alliance waived the no disqualification rule. That’s what the Vachon brothers had so many times relied upon; when they saw they were going to lose, they would intentionally get themselves disqualified, and thereby retain the championship by exploiting a loophole in the rules. So they had to beat us to keep the title this time. Well, it was like there was electricity in the air. Like I said, we won the match, and what happened then was simply unbelievable.”

Bastien had been in other tag teams, but his partners tended to get injured before they could make a title run. Then came Hercules.

“I figured I needed somebody as indestructible as him to team up with if I was going to reach my goal,” Bastien said. “He’s 300 pounds and none of it is fat.”

Though perhaps indestructible in the ring, Alfonso Carlos Chicharro, aka Hercules Cortez, died three weeks after the title defense in Duluth. According to the Ring the Damn Bell blog, Chicharro and Bastien were driving from Winnipeg to Minneapolis when their vehicle crashed on the side of the highway near St. Cloud.

“Bastien survived the wreck with some minor injuries,” the blog article notes. “Hercules Cortez on the other hand was ejected from the vehicle and landed approximately 75 feet away from the wreckage. It was believed that Cortez suffered a broken neck and died instantly. The next night, AWA promoter Wally Karbo decided to go on with the show and had AWA world champion Verne Gagne replace Cortez at the event.”

Bastien would partner with the Crusher after that, eventually dropping the belts to Nick Bockwinkel and Ray Stevens. Bastien died on Aug. 11, 2012, at age 81.

https://www.youtube.com/watch?v=cjTOc8Gt1Js Duluth painter Cynthia Faith combines art and social justice to present messages of peace, kindness and love. In its...