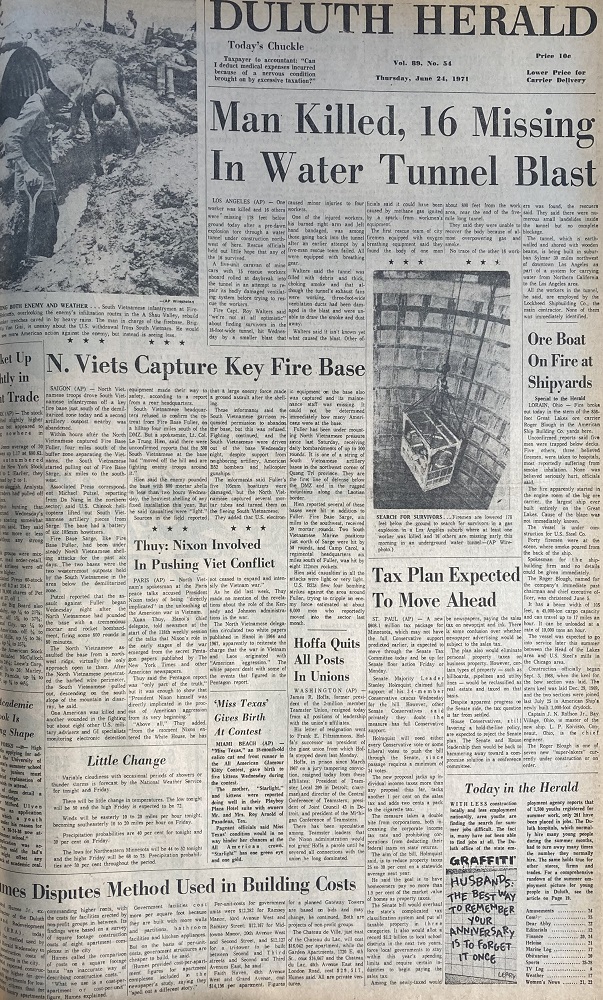 Off-sale liquor stores in Duluth were closed on Memorial Day and on election days 50 years ago, but things were about to change. The June 23, 1971 Duluth Herald reported that the city’s alcoholic beverage board voted in favor of letting the stores open, leaving it up to the city council to follow the recommendation. The action was authorized by a March 15 action of the state legislature. Caption: New Tot Lot … Park Pointers and their community club sponsored bingo games and an art fair to raise funds to establish a tot lot at the S-curve between 1200 Lake and 1300 Minnesota avenues. Donating time, funds and materials to the effort were the U.S. Coast Guard, the American Legion and the Duluth Parks and Recreation Department. Among the most innovative features of the lot is a willow tree with its bark shaved off, begin played on, from left, by Guy Kinney, 8; Bea Smith, 10, of Cloquet, and Paula Kinney, 7, of 1104 Minnesota Avenue. Dedication of the lot is tentatively scheduled for next week. — (Herald Photo.) Caption: Proud of Golden Years … The Aftenro Home, a boarding care residence for senior citizens, is 50 years old and will mark the occasion with an “open house” Sunday afternoon. Residents have private rooms but also enjoy many opportunities for casual recreation and companionship. An ancient Bible they are looking at stimulates conversation among, from left, Mrs. Esther Strand, Mrs. Amanda Haarstad and Mrs. Kathryn Sullivan. The Herald’s executive sports editor, Bruce Bennett, interviewed American League baseball rookie umpire Bill Deegan in this issue. The 36-year-old Deegan was a sergeant at the Duluth Air Base and a full-time bartender and butcher in town. He said umpiring is “the greatest job in the world for someone who likes baseball.”

At that point Deegan had ejected just one manager from a game, Lefty Phillips of the California Angels.

According to Wikipedia, Deegan continued umpiring in the American League until “midway into the 1980 season,” when he “quit so that he could pursue other business opportunities.” He returned in 1984 during an umpire strike to officiate the American League Championship Series with a crew of “local and collegiate umpires.”

Wikipedia notes Deegan “officiated in four American League Championship Series: 1970 (Game One only), 1974, 1977 and 1984. He also umpired in the 1978 All Star Game and the 1976 World Series; he was the home plate umpire for Game Four of the Series, which the defending champion Cincinnati Reds won on the strength of Johnny Bench’s two-home run, five-RBI performance to complete a sweep of the New York Yankees.”

Selective Focus: A Year of Sunrises with Ron Benson

Ron Benson, a Duluth glass and ceramic artist, began posting daily photos of sunrises over Lake Superior to Facebook during...