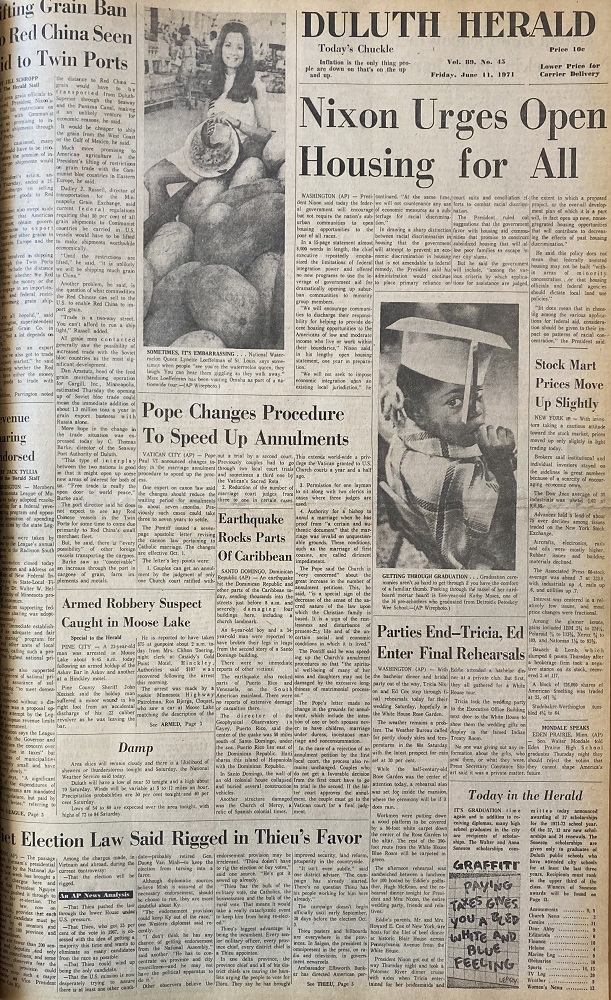 Tops in the local news 50 years ago was the potential for increased grain shipments through the Twin Ports resulting from President Richard Nixon lifting restrictions on trade with Communist countries. The June 11, 1971 Duluth Herald reported the president’s action ended a 21-year-old embargo on selling most consumer goods to Red China.

In other news, the Grease Band was scheduled to play the Armory, the Western Horse Show was coming up in Lakewood Township and Duluth Cathedral High School was planning an all-class reunion. Caption: Coming to Duluth … A rock group known as the Grease Band will perform in the Armory at 8 p.m. June 19. The show also will include music by the Trinity Freak, folksinger Ken Shafer and the Mystic Lantern Light Show. Promoters from the Twin Cities say they plan to schedule more rock concerts this summer in the Duluth Armory. Caption: Horse Shows Coming Up … Mrs. Jean Ziegler of the Duluth Saddle Club rides Sally, her entry in Saturday’s 14th annual Western Horse Show at the Duluth Saddle Club Arena on the Lakewood Road in rural Duluth. Riders in 29 events plus a special future riders division for children eight and under will vie for points and ribbons in the Arrowhead Association competition, one of several during the summer in northern Minnesota. Judge for Saturday’s events will be Phil Jensen, Albert Lea. Competition begins at 8:30 a.m. and runs all day. On Sunday, beginning at 8:30 a.m., the 8th District Registered Quarter Horse Show will be held at the same site. Judge for this event will be Lawrence Dehaan, Brookings, S.D. — (Herald Sportsphoto) Caption: Preparing for All-class Reunion … Among reunion officers planning for the second Cathedral High School all-class reunion to be held July 16-18 in Duluth are, from left, W. A. Metzger, vice president; Mrs. Willis A. Walker, secretary; Mrs. John Netzel, assistant secretary, and Ellsworth F. Jones, publicity chairman. Other officers not pictured are John J. McGirl, president, and Robert Spehar, treasurer. Committees are presently contacting alumni from throughout the United States to attend the event in which 2,000 alumni are expected to attend. — (Herald Photo.)

https://www.youtube.com/watch?v=GTKNILTyXBw Students from Lincoln, Woodland, Washington and Morgan Park schools in Duluth participated in the "Wacky Olympics" at Ordean Field...