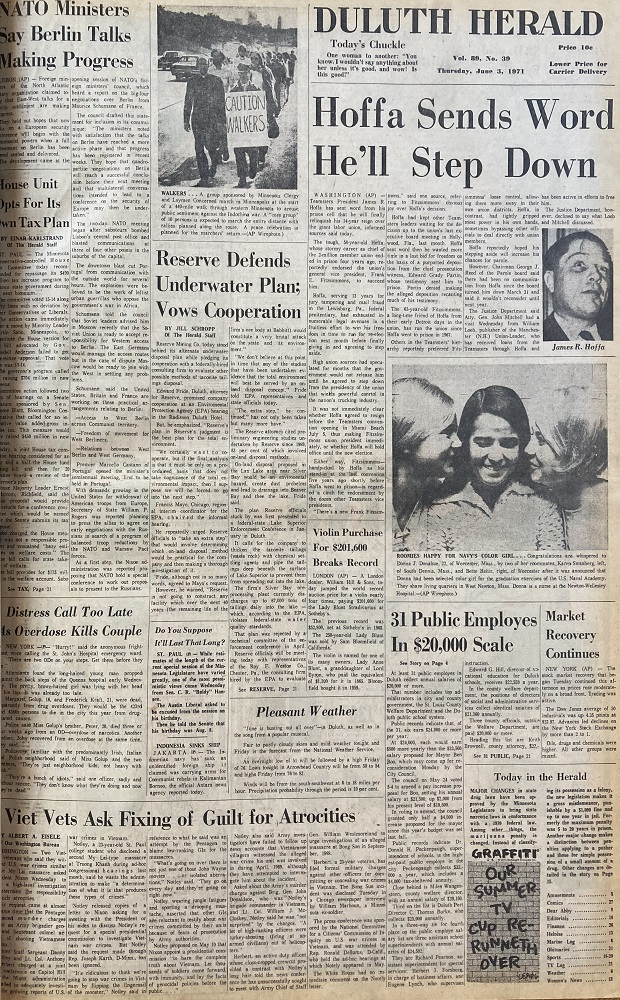 Wilbur Anderson and Dean Reese of Anderson Furniture announced the completion of an extensive remodeling project at their Anderson Furniture Co. store fifty years ago. The Duluth Herald of June 3, 1971 provides the details of the work done at 2032 W. Superior St., also noting the remodeling was planned to fit in with a proposed new mall across the street. Of course, Miller Hill Mall would open instead, two years later.

Remodeling work extended the store front from 50 to 100 feet. It also added floodlighting and solar glass windows which eliminate the need for awnings to the front of the store, the owners said.

All four floors were remodeled, and a new summer recreation department was added in space formerly occupied by the appliance department.

The concept of room settings was expanded to the point where the greater part of the store is now in vignettes of room groupings.

Conversion of the basement to a thrift shop in furniture odds and ends will be completed shortly, Anderson and Reese said.

Architect for the project was Jon Helstrom, and contractor, Miron McDonald. Work began shortly after Jan. 1.

Major remodeling of the store was planned to fit in with a proposed new mall in the 19th to 21st Avenues West section of Superior Street, they said.

Work on the proposed mall, planned for after the completion of Interstate 35 through the area and consequent reduction of traffic on Superior St., “could begin in the very near future,” Reese said.

Cost of the proposed mall has been estimated at between $25,000 and $30,000 per block and would involve street resurfacing, new curbing, drains and storm sewers, trees, grass, signs, benches and low-level lighting. Private funds would finance most of the work.

“We believe that this area will be the center of shopping in the whole city,” once the mall is completed, the owners said. Anderson Furniture Co., which operated for one year as Anderson Thorsell Furniture Co., was started by Anderson’s father in 1910 in a 25-foot section of the present building.

The firm later purchased the entire store and added a fourth floor. Two years ago a 50 foot square warehouse for upholstered furniture was added to the rear of the original building.

The furniture outlet now employs 19 persons, compared with five in 1910.

A front-page article in the paper about public-sector employee salaries reported that 31 in Duluth collected $20,000 or more annually. The top seven are listed below. Caption: Business and Pleasure … Wednesday was Play Day for the Duluth District Dental Auxiliary, but members did take time to elect and install officers at a business meeting after the day’s recreational activities were over. The annual end-of-the-year social occasion began with a luncheon at noon in Northland Country Club. Golf and bridge playing started at 1 p.m. and dinner was served in the evening. Mrs. Willis Irons, right, president of the Duluth auxiliary, is shown with some of the group’s out-of-town guests who came for the day. From left are Mrs. C. S. Flynn, Minneapolis, state auxiliary president; Mrs. Erwin Schaffer, Minneapolis, wife of the dean of the University of Minnesota Dental Collage, and Mrs. Robert Dahlberg, St. Paul, president-elect of the state auxiliary.–(Herald Staff photo.)

Colleen & John played the Red Slipper Lounge at the Holiday Inn in Superior that night. There isn’t a lot of information about the duo on the internet, other than the audio clip embedded below, which is presumably the same Colleen & John. Although the Herald ad insinuates their music is “The Atlanta Sound,” the description on YouTube notes “John from Wisconsin and Coleen from Tennessee.” 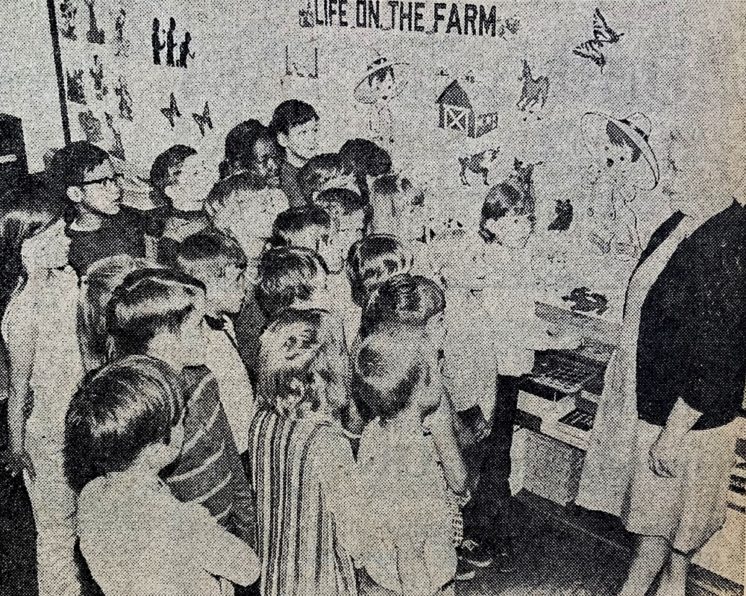 This wolf pup is still working on a proper howl

https://www.youtube.com/watch?v=u55sqkFR36U The wolf pup in this video was trying its best to howl, but just couldn’t quite get it out....