Curley the Trapper brings body of scurvy victim through Duluth 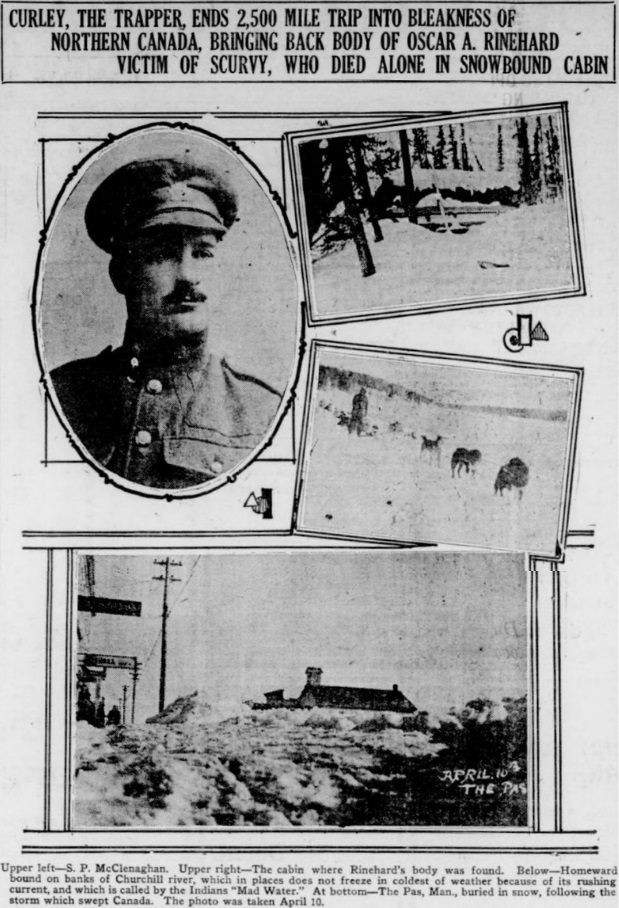 One hundred years ago today a Duluth native completed his mission to recover the body of a former Duluth man who died of scurvy deep in the woods of Manitoba.

S. P. McClenaghan, known as Curly the Trapper, discovered the body of former Duluthian Oscar A. Rinehard on Oct. 15, 1920, reported it in February 1921, and began a trip to recover the body in March. The body passed through Duluth on April 15 and was buried in Shawano, Wis. the next day. McClenaghan returned to Duluth on April 19, telling his story to the Duluth Herald. The article below appeared in the April 20 edition of the paper.

Curley, the Trapper, ends 2,500 mile trip into bleakness of northern Canada, bringing back body of Oscar A. Reinhard victim of scurvy, who died alone in snowbound cabin

A trip of 2,500 miles, of which 700 miles was over the bleak snow and ice-covered barrens and wilderness of the northernmost section of Manitoba province, was completed yesterday by S. P. McClenaghan, 1514 East Fourth street, better known in the Canadian Northwest as “Curley, the Trapper.” He brought out of this wilderness the body of Oscar A. Rinehard, former Duluthian, which he had found Oct. 15 last while trapping on North Indian lake.

The 350 miles each way over the wilderness, with a dog team, was made in twenty-three days. Mr. McClenaghan was accompanied by Constable Percy Rose of the Provincial police, and with them was David Brightfoot, a half-breed Indian-Eskimo, and Thomas Spence, Indian, both guides. Each man had a six-dog team, the trails being broken by the Indians running ahead.

“We had a remarkably successful trip,” said Mr. McClenaghan yesterday. “The guides took a direct trail. We were on our way through the wilderness just twenty-three days, arriving at the Rinehard cabin on Good Friday. We left on our return trip on Easter Sunday.

“We encountered three bad storms, one on March 15, the next on March 29 and the third on April 5. The last storm was general throughout Northwest Canada and about the worst storm in many years. We arrived at the railroad on that day.”

During the trip the men shot five caribou for food for themselves and the dogs, as well as one of the largest wolves which the trapper said he has seen in two years. The wolf measured six feet six inches from tip to tip.

The trip was made on behalf of the relatives of the dead man. The body was taken to Shawano, Wis., where burial took place last Saturday. Mr. McClenaghan passed through Duluth on Friday with the body. He left on his north trip March 3.

Rinehard had died about April 9, 1920, from the ravages of scurvy. When the body was found by Mr. McClenaghan the trapper was accompanied by Charles Dyshart. It was then in a badly decomposed condition.

With news of the finding of the body, which was brought back to civilization by the trappers in January, relatives of the dead man made arrangements with Mr. McClenaghan to make the trip.

https://www.youtube.com/watch?v=2QDb9dMhVN8 Low's cover of "Knockin' on Heaven's Door" is available on the Dylan Revisited CD, available with the June 2021...