The Value of Duluth Telephone Service in 1920 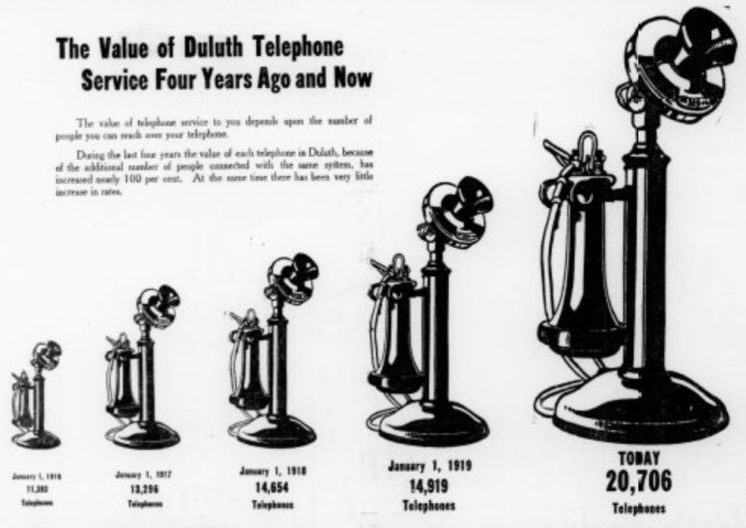 This advertisement in the March 9, 1920 issue of the Duluth Herald notes Duluth had 20,706 telephones.

The text of the ad reads:

The Value of Duluth Telephone Service Four Years Ago and Now

The value of telephone service to you depends upon the number of people you can reach over your telephone.

During the last four years the value of each telephone in Duluth, because of the additional number of people connected with the same system, has increased nearly 100 per cent. At the same time there has been very little increase in rates.

And the figures at the bottom show the growth in the number of telephones in the city between 1916 and 1920:

According to the 1921 book Duluth and St. Louis County, Minnesota: Their Story and People, telephone service in Duluth began in 1881, one year after Walter Van Brunt installed the city’s first “electric speaking telephones.”

As an insurance writer for C.H. Graves & Co., Van Brunt had to walk 10 blocks each day to the grain elevator to get the daily receipts, then walk back to his office, then back to the elevator with the policy.

Having seen Alexander Graham Bell demonstrate the telephone at the Philadelphia Centennial International Exposition in 1876, Van Brunt decided if he installed one in his office and one at the elevator, he could save himself the travel time each day.

Soon, other businessmen wanted telephone hookups. Van Brunt operated an eight-point switch as a favor to some of them, but when he found his line was often busy when he needed to call the elevator, he disconnected his friends.

Duluth’s first telephone directory was issued in 1882. The number of customers was 30. Those early years were difficult, with sleet and ice storms frequently destroying pole lines and disrupting service. For three months in 1892, there was no service after a fire destroyed the exchange quarters.

At the end of 1899, there were 753 telephones in Duluth. The rapid growth of this new industry brought with it competition. In 1900, the Zenith Telephone Co. was formed. Telephone customers exceeded 8,000 by 1910. Both companies lacked the assets to meet the growing need for expansion.

An electronic switching system went into effect in 1974, processing calls and offering services such as three-way calling and call forwarding.

By the 1980s, the number of telephones in Duluth was nearing 100,000. And now everyone has one in their pockets.

Big Into Cold Fortunes and Warriors Obscura (Jan. 2) Available on Bandcamp Glitteratti Among the Wild (March 6) Available at...