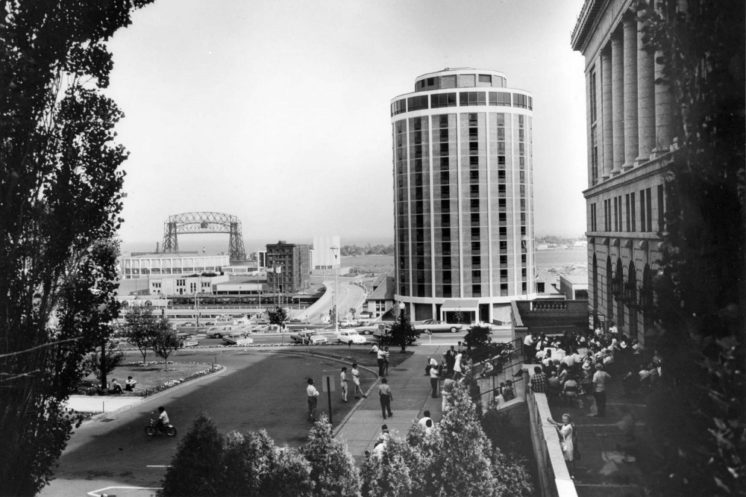 Sitting awkwardly between the Duluth Arena and the Radisson Hotel in this photo by Perry Gallagher is a seven-story building that can’t be far from demolition. What was it?

A band is playing on the steps of the Federal Building in the Civic Center. The Federal Building is at the right, the St. Louis County Courthouse is behind you and a little to the left. Duluth’s City Hall is not visible, but is at the far left, facing the Federal Building. The cylindrical building is the Radisson Hotel. The Arena Auditorium is just in front of the Aerial Bridge. The span is up: a vessel is either outbound or inbound. Cars and pedestrians on either side of the bridge must wait. They are being “bridged” or stopped by the vessel traffic. On the other side of the tree and the child on the bicycle is the civic center pool and fountain.

So … about the mystery building. My wild guess at an address would be in the 400 range of West Railroad Street.

Below is a zoom-in on an older aerial photo from before the West Fifth Street bridge was built, showing our mystery building surrounded by other buildings. Feel free to name those buildings, too. Because every mystery leads to new mysteries. I've been working on a medical humanities project. Some Duluthians are part of it, including local artist Rob Adams. Read...