[Editor’s note: This week we’ve pulled out another relic from the archive of Slim Goodbuzz, who served as Duluth’s connoisseur of drinking establishments from 1999 to 2009. In this essay we travel back ten years to a time before Duluth’s Black Water Lounge existed. A restaurant called the Chinese Garden occupied that part of the Greysolon Plaza, and our inebriated anti-hero paid a visit. This article was originally published in the June 30, 2008 issue of the Transistor.]

If there’s one thing I hate about being sober it’s how polite I become. Here I am, standing next to the cash register at the Chinese Garden, waiting for a fucken waitress to come over and choose a table for me. This wouldn’t happen if I were drunk.

Obviously, if had any spirits in me at all, my choice would be to flop into the closest available booth, even if someone else is sitting there. Tonight, that would mean interrupting what appears to be a magic night of romance for a pair of chubby 60-year-olds who are silently finishing their dinner.

The man, whose grey hair is pulled back into a ponytail, breaks their conversational lull by asking the woman, “So, are we going to stay here and drink all night?”

The waitress arrives and asks me if I’d like to sit at a table or a booth. I tell her it doesn’t matter, as if it doesn’t. Of course, it does, I just don’t realize it yet.

She seats me at a table near the window, and gives me a menu, but I have no interest in food. I want the cheap yet semi-palatable wine that, according to the menu, is all the Chisese Garden has in the booze department. No liquor. No beer. Only wine.

I order the first thing I see listed on the menu: a carafe of burgundy for $9.95. She tells me that the carafe is not currently available, but she can give me a half-carafe and then come back and refill it later. Whatever. They can tap that shit off into a couple of dog dishes for all I care, as long as I can get my fill of cheap vino. 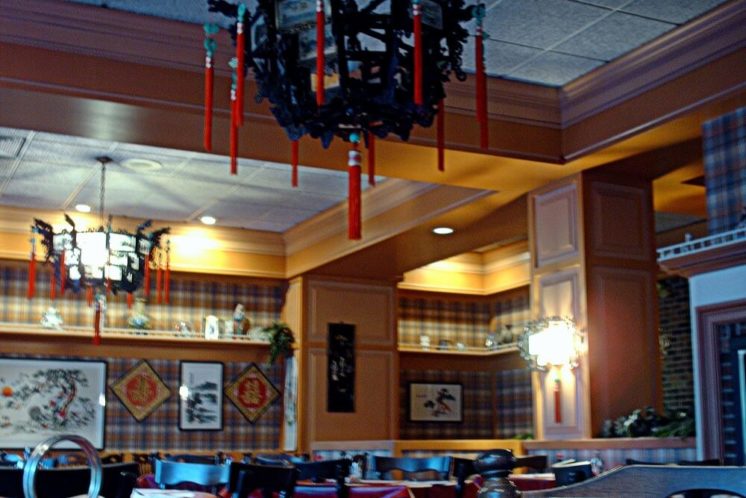 Back at my already-favorite booth, the woman is telling the man, “I love you … I just … love you … can’t I just love you?” The man responds by immediately asking the waitress, “Can you call us two Yellow Cabs?” The instruction that it be two cabs makes it clear there will be no loving going on.

The man then recites the Yellow Cab phone number from memory, an indication that this scene has played itself out a few times before. “Seven two seven, one five one five,” he says with careful pronunciation, leaving no room for error. The waitress tells them their cabs will arrive in five minutes.

As the guy stands up to settle the bill, I notice they’ve been drinking from the full carafe! Mystery solved.

I look away, and suddenly an enormously loud belch pierces the room. Although I’m used to such things in my line of work, it’s quite jarring to hear a bar-style belch in a quiet restaurant. I mean, this place is mostly empty, and the few elderly couples here (presumably residents of the neighboring Greysolon Plaza apartments) are silently sipping wine and chewing on substandard chop suey. Anything louder than a kitchen cockroach tends to stand out.

At first, I assume the belch came from the guy, but then the woman says, “Excuse me.” Three more long and rumbling belches immediately follow, and I start to worry that I’m about to see an Almond Ding volcano erupt all over the red carpeting. Bracing myself, I keep my eyes peeled so as not to miss any gory details.

Unfortunately, the Cantonese lava stays below ground. The woman stands up and hugs her reluctant companion for about 40 seconds before he pries himself away and they leave solemnly in single file.

The waitress comes over and takes my half-carafe, returning a moment later with the second portion of my wine. I tell her I don’t want anything to eat, and she doesn’t seem surprised. A few more couples come and go while I hang around drinking until closing time.

On my way out, I stop at the rest rooms. I don’t think much about the propped open door at first, but it strikes me as odd that there is no urinal, just two toilets. As I pee, I hear a couple exiting and their conversation is just as clear as it would be if they were standing right next to me. This, of course, means they can hear my piss hit the toilet water just as clearly.

As I walk out, I realize I’ve been in the women’s room.

Speaking of exiting in style, I’ll be passing on Yellow Cab in favor of Cab-a-Ray’s. I am a connoisseur, after all. Ed Newman is a prolific artist, writer and supporter of the arts in our area. His frequent blog posts at...