Ripped at the NorShor Experience in 2007

[Editor’s note: Duluth’s NorShor Theatre has been closed for more than seven years. It will reopen in February when the new operator, the Duluth Playhouse, launches its production of “Mama Mia.”

The NorShor, of course, has a long and storied history, including a stretch from 2006 to 2010 when it operated as a strip club called the NorShor Experience.

For this week’s essay we’ve once again pulled out a relic from the archive of Slim Goodbuzz, who served as Duluth’s “booze connoisseur” from 1999 to 2009. Ten years ago he paid a visit to the NorShor and published this bawdy report for Duluth’s weekly Transistor.]

Big Lips has the method down.

Every 10 minutes or so, he rises from where he’s been sitting alone at a table in the corner. Then, with his hands casually in the pockets of his camouflage jacket, he simply takes a little stroll, puckering his big fat lips and whistling as he looks to the left and to the right and behind him, making sure that no one is videotaping him or that his wife isn’t standing behind him ready to clobber him with a frying pan. Eventually, he makes it the 10 or 15 feet to the stage where some naked chick is grinding her life away. “Well,” he appears to suggest, “as long as I’m on my stroll, I might as well tip this stripper.”

He pulls out a single, and, after the stripper gyrates in front of him for 30 seconds or so, deposits it in the waistband of her undies. Then he juts his hands back into his pockets, starts whistling again, and continues his stroll, which leads right back to his table. All the while, everyone else in the audience sits either silently drinking beers or carrying on normal conversations. It’s like no one wants to talk about the naked elephant in the room.

Me, I’m sitting stage left, where I’ve just given a waitress 10 bucks in exchange for a whiskey Coke and a handful of HPV-soaked dollar bills, trying hard not to remember all the time I spent here before this place was a strip club. Who would have thought that increasing the amount of nudity would decrease my enjoyment of the NorShor Theatre? 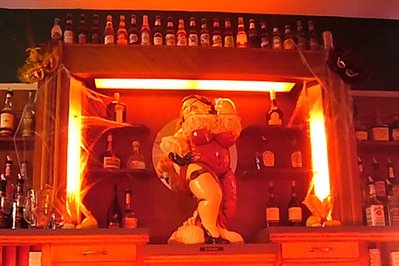 The stripper onstage tonight is showing us some attitude. “This ain’t a free show,” she shrieks. For some reason, when she says this she — along with everyone else in the room — looks at me. I tell her I gave at the door.

I guess I don’t know the unwritten rules of these whoreholes, even though I do know the written ones, which are posted prominently in the entryway. It turns out, the NorShor Experience has a dress code. It isn’t for the people on stage, however, it’s for the people in the audience. The proper attire is vital to watching others undress, apparently.

Rule #1 is: “No baggy pants.” This must be to prevent guys from showing off their boners, but I’m not sure baggy pants are better than tight pants in such a scenario. I’ve always heard that sweatpants are vital for lap-dance enjoyment, so I guess I’ll be sure to wear tight sweatpants next time.

I order another drink and almost miss out on the next part of the act, in which a woman from the audience loses control and approaches the stage. The stripper pulls the woman’s top down and starts kissing her breasts, then they slide into a 69 position. This causes some guy to start recklessly flipping ones at them like he’s dealing cards for a game of war. Personally, I think all three of them conspired to stage this little moment with the hope that it would encourage more tipping.

Watching this audience participation makes me realize that nudie bars should be more like The Price is Right. The crowd here is probably 30 percent female. Wouldn’t it be great if Rod Roddy was off to the side, yelling, “Wendy Peterson, come on down!” And then we all got to see some receptionist from Wells Fargo shake her goods?

That concept would work out particularly well tonight, because two Duluth Police officers just came in, and one of them is female. Creative minds immediately start speculating whether she is a legit police officer or part of the show. Whether she takes it all off for us or not, I guess as long as the handcuffs come out I’ll consider my $3 cover well spent.

It turns out, the cops are here to haul off a dude who is violating a restraining order. The cuffs do come out, but he doesn’t put up a struggle, so I value the entertainment at about $1.50.

Natalie Salminen Rude works in a variety of mediums, and recently opened a studio/gallery in the Woodland neighborhood. She tells...