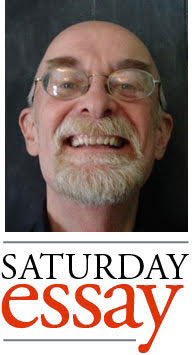 Old-time music is better than it sounds. Old-time, not bluegrass. Of course it’s futile to argue tastes in music. Foolish to judge the listening choices of another. Folly to debate ones’s aesthetic preferences. But having said that, may I add: bluegrass sucks.

Of course there’s some overlap between the styles, bluegrass having “evolved” out of old-time, around WW II. It’s not like there’s a tidy trench between the two, over which we lob our slurs and brickbats. But for the most part bluegrass emerged around 1945 as Earl Scruggs (forgive him Lord) invented his 3-finger style of banjo picking that, along with fairly specific instrumentation, defines the style. Still, the term “bluegrass” is often misused to label anyone playing that assortment of stringed instruments. There’s a local pop band most always labeled “bluegrass” because of the instruments they play, but it ain’t so. How do I know? They don’t suck.

Sorry. I really should see a shrink about this hot-lick envy. Treat these deep-seated fears of Stetsons and bolo ties. Having spent so much of my life high and lonesome you’d think I’d better appreciate those mountain harmonies.

Melodies from the British Isles arrived with fiddlers emigrating to antebellum Appalachia, and met the banjo, which came over with the slaves from West Africa. Here, it may be conjectured, is where Whitey got rhythm, and old-time music was born. Granted, it’s not for everyone. Some melodies seem terminally quaint, and string bands play in a limited number of keys, contributing to a sense of sameness, but just relax and let the monotony wash over you. It’s like the surface of the ocean — an endless uniformity — until you dive below and spy the diversity of the deeps.

Full disclosure: I’m an amateur 5-string banjo player in the clawhammer, or frailing style, which, like the banjo itself, can be traced to Africa. One more cool thing to appropriate from black folks, I thought, count me in! My first exposure to banjo undoubtedly came from television shows like The Beverly Hillbillies and Hee Haw. So, as much as I’d like to, I cannot see a banjo without it appearing as a comedic prop, an archetype rising from my media-addled subconscious. Even if it’s the genius Bela Fleck fronting a jazz- fusion band, his banjo telegraphs hayseed humor. Even as a player plays Beethoven, I’m counting teeth. Further confounding the stereotypes, during the American folk revival of the 1950s and ‘60s many old-time banjo players were New York City jews.

Slave musicians played for their masters’ dances, and a tradition of black string bands, strong in the 19th century, lives on today, if only barely. These roots lie deeply buried, and pretty much forgotten. The tunes themselves, some hundreds of years old, have passed from generation to generation, their numbers winnowed by personal preference, and the corners rounded off melodies in endless variations of the folk tradition. They are mostly learned by ear and exist primarily in the brains of old-time musicians. But there are books, and of course modern technology has changed things, beginning with audio recordings, and extending into the conveniences of the internet age. Whereas some of the more authentic players will cite the lineage of the tune they’re playing by naming who it was they learned it from, I am more likely to admit I got it from an Italian guy on YouTube. That’s fine by me because I’m a lousy folk musician — I tend to avoid The Folk.

I did go to Banjo Camp once, driving 14 hours one way in a Toyota mini motorhome with two other grown, and ostensibly responsible men. We stayed in dorm rooms, ate in a cafeteria and attended banjo classes. There were famous players there like Bob Carlin and Paul Brown. What — you haven’t heard of them? But Bob Carlin learned from Fred Cockerham in Round Peak, North Carolina! Paul Brown learned from Wade Ward in Independence, Virginia! These are seminal streams of old-time banjo reaching back, before radio, into the distant past. For a few hours I was part of that lineage, learning from someone who learned from someone, etc., and though it didn’t do much for my playing, it does anyone good to brush against such traditions in this all-but-rootless and future-mad world.

In string band music you’ll hear about “crooked” tunes and “singing songs.” A crooked tune contains an extra beat or measure, making for an odd meter. “Singing song,” as far as I can figure out, is just a redundant way of saying “song,” as opposed to a “tune” which is instrumental. The names of the tunes themselves comprise a rich cultural payload. Names like “Breaking Up Christmas,” “Hell and Scissors,” and “Shove the Pig’s Foot a Little Further in the Fire.” Breaking Up Christmas refers to a twelve days of Christmas tradition where celebrants traveled from house to house. The hell in “Hell and Scissors” refers to the leather holster worn by a tailor. A pig’s foot is a blacksmith’s tool.

In 1921, in what must be one of the most ironic backfires in the history of music, Pete Seeger’s parents took him and his siblings to Appalachia in their Model T Ford, pulling a homemade camper resembling a covered wagon. His dad was a musicologist and his mother a concert violinist, and their goal was to bring classical music to the hills. After their concerts the locals would ask to play their own music, and tables turned. Pete, his brother Mike, and sister Peggy would eventually go native, growing up to become one of the most prominent folk music families in America. During Senator Joseph McCarthy’s anti-communist witch hunt of the 1950s, Pete Seeger was blacklisted, and convicted of Contempt of Congress, in a jury trial in which his offer to sing an offending song to the judge was rejected by the court. Pete Seeger — threat to the Republic, or skinny peacenik with a banjo? The truth be told by history.

My late sister was a classical violinist until she turned 40. Then, due to a combination of stress and tendonitis, she — there’s no kind way to say this — she started playing bluegrass. I myself had dabbled in the Dark Arts when I was young, but she went whole hog, a total pro. Luckily she learned to play old-time, too, and slowly tricked me into accompanying her on guitar at family gatherings. I didn’t even have a name for the music at first. Mountain music? Fiddle and banjo crap? I had been to a few country dances, and above all old-time music is dance music. Eventually I got a banjo, and shortly after rode my sister’s coat-tails into a barn-dance gig. It was the wood-stoves against the November wind as it teased between the planks. Fairy lights turned the loft air golden. And dancers circled like planets, like seasons, like clumsy, happy humans alive in time. And the caller was the weaver of souls, clasping hands and turning on heels, fellowship woven from muscle and bone, and the weaver’s own intentions.

“Promenade and don’t be slow. Where we’re going nobody knows.” Promenade.

Thank You for Your Service

This is partially a reflection on a movie seen at the Duluth 10 Cinema, partially a survey of important Duluth...