Ed Newman is a prolific artist, writer and supporter of the arts in our area. His frequent blog posts at “Ennyman’s Territory” cover the work of other artists, events and issues around town. You can almost always count on seeing him at openings, and he’s also very involved with this week’s Duluth Dylan Fest. He talks about how all these passions and interests come together for him.

EN: I work in a variety of media. About four decades ago I re-defined myself as a “creative person” which opened up all kinds of channels for creative expression beyond painting and drawing. I became serious about my writing at that time, and have always been drawing and making art in the background of what has primarily been a career in advertising.

My style is pretty much eclectic. I might have gone further as an “artist” had I taken a single approach. Since I have never had to make a living with my art I could explore lots of different kinds of expression and enjoy the creative process for its own sake. Don’t Look Back
Acrylic, latex on panel, 24”x 26”
Just as Bob Dylan has had many phases and transfigurations, so my images of Dylan similarly reflect varieties of treatment. Title come from the D.A. Pennebaker film by the same name, and the image reflects Dylan during this cutting edge period of his career. Also available as giclee reproductions. The largest size is limited edition but smaller prints are available. Since early childhood I have always been interested in faces, so even though I don’t work in a single medium I do have recurring content, and faces are one of these recurring themes. One technique that I pursued was to use Photoshop to modify faces and then to paint these faces in various ways. I’ve done countless faces, lit in such a manner as to produce harsh contrasts which I then break apart in panels, or that’s how I see it. Examples of this include my Dylan painting “Don’t Look Back.”

As I was growing up my father was a chemist who worked with polymers in the development of latex paints. While pursuing an art major in college at Ohio University he gave me gallons of polymer medium with cans of pigment so I could mix my own colors. While other students were buying paint in small, expensive tubes, I had an endless supply of paint and was able to work on a much larger scale very early on. I still love the smell of latex polymers and acrylic paints. Innocence
Acrylic and latex on panel, 24”x 36”
Also available as giclee reproduction, the image reflects my ongoing fascination with faces, somewhat in the manner in which Picasso saw two faces merge based on the way shadows play. The title and concept may have been birthed by Kubrick’s Star Child in the final scene of 2001: A Space Odyssey.

But I also like working in other media. I enjoy brush and ink drawing, pen and ink drawing. I am always experimenting with various techniques, including “open shutter light painting” with a camera and experimental things with digital photography to a lesser degree.

You spend a lot of time and energy promoting and discussing the work of other artists in the area. Do those activities influence your work, or does that energize you in your own work?

My interest in promoting the arts scene stems from two motivations. First, a desire to give back to the community. Second, to fill a void of sorts, to be an advocate for the arts. The newspaper, the Reader, PDD and other local media are covering some of what is happening but you just don’t see many reviews of the many shows, especially coverage of the truly grass roots artists who labor below the treetops. The Tweed and DAI have staff to send out PR but there are hundreds of artists doing work in our midst, showing at dozens of venues, yet virtually no coverage at all. So on my Ennyman’s Territory blog I’ve tried to pick up the slack. Blue Van Gogh
Original painting, acrylic on paper, 13″x 16″
Signed, limited edition giclee prints: $195.20 (Set of 50)
The scan by CPL Imaging is phenomenal in the way it captured the 3-D features of the original. Looks very nice framed.
The painting captures something of the flavor of Vincent Van Gogh’s sentiments expressed in this letter to his brother Theo: “Instead of trying to reproduce exactly what I see before me, I make more arbitrary use of color to express myself more forcefully.”

I have to give a nod to Bob Boone for having brought this local focus into my blogging. From 2007 to 2011 I primarily wrote about artists in other countries or other parts of the U.S. I used social media to share my work on an international art ning and used Twitter to find artists from other countries. I literally interviewed artists from every continent. Then Bob Boone asked if I would write for the Reader, with two conditions. First, that I cover local artists. Second, that I publish in the Reader first before sharing on my blog, a reasonable request. In this manner I discovered the breadth of our local scene.

Are there other reasons you’ve been so involved in the local arts scene? 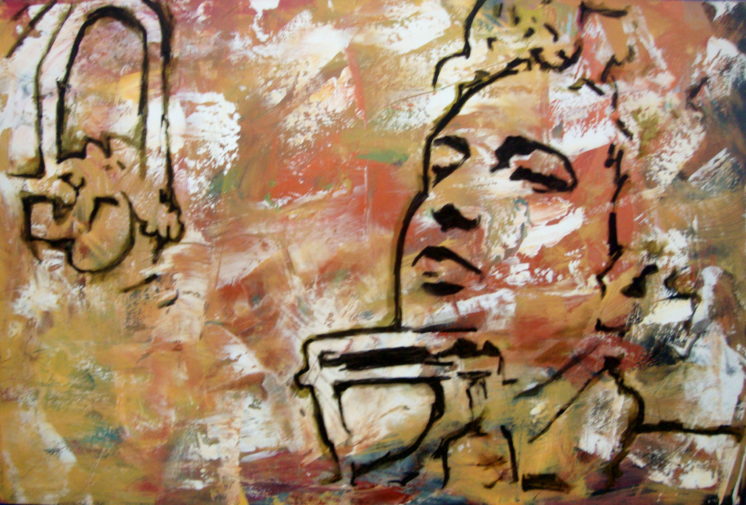 Blowing in the Wind
Acrylic on panel, 24”x 36”
One of numerous paintings in which I explore abstract or non-defined background with an image in the foreground. In this case the image is Dylan, a recurring theme evidently

Does your visual art connect or cross over with your writing of the blog or even the books you’ve written?

It was actually my blog that led me back into a greater commitment to my art. In the beginning my aim was to produce a writing blog that was illustrated by the author. It was my “unique angle” so I wasn’t just another this or that. If I wrote about Thomas Jefferson I would do a drawing of Jefferson the night before. If I was doing something about Thanksgiving I would draw a turkey or paint Ben Franklin who suggested that the Turkey be our national bird. I would sometimes do paintings and drawings of seven days’ worth of blog posts on the weekend before.

This led to someone suggesting I have an art show in which I ended up displaying 130 pieces. Unfortunately I sold a few and began taking my art more seriously. Working full time while writing and doing art ended up being a challenge. When I “retired” from full-time employment this past December I hoped to have more time for art and music, but my energies are still primarily in the direction of writing.

I’ve used my art on the covers of some of my books such as The Red Scorpion, a young adult novel which lead me to do a couple paintings of scorpions. Three of my books are short story collections, one of which is in print: Unremembered Histories. Dogs of War
Acrylic on Kodak paper pre-mounted on Fome-Cor, 24”x 24”.
Limited number of 18”x 18” giclee reproductions of this painting also available, signed and numbed. The inspiration for this painting came from a documentary about dogs that were used in wartime, and in this instance specifically, the story of how 4000 of these dogs were put to death after service in Viet Nam for fear they might bring home diseases. The image depicts a G.I. facing one direction and his trusting companion facing another direction, unknowing of their imminent separation and impending doom. The picture attempts to depict the haunted feeling I had while watching this moment in the film, which seemed also to serve as a metaphor for many relationship break-ups.

I think the biggest way my art and writing cross-pollinate one another is in my artist interviews. I have a stronger appreciation for what artists are striving to achieve because I have worked a little in nearly every medium and had exposure to art for the whole of my life. Before kindergarten I was enrolled in art classes at the Cleveland Museum of Art, an experience I consider significant in my personal development not only as an artist but as a person. Young people should gain exposure to the arts at an early age.

One of the big challenges all of us have is probably that of trying to be authentic. Herman Hesse begins his novella Demian with this statement: “I wanted only to try to live in accord with the promptings that came from my true self. Why was that so very difficult?” I think Woody Allen hit the nail on the head when he made the film Zelig about a character who wanted so badly to fit in that he became all these different characters, thereby losing his own true self.

This same thought was echoed in David Masciota’s quote at the beginning of David Pichaske’s Crying in the Wilderness: “One of the most important challenges for any American in the twenty-first century is to remove the mask and shed the persona that regulates life, to actually work to achieve a fulfilling and freeing identity.”

When I am completely honest, I know that my art has shortcomings because I have often had such a narrow space of time to work in and am frequently too hurried to finish some pieces properly. Often, though, the purposes have been more illustrative anyways, or experimental and I draw satisfaction from the ideas more than their execution. It may even be that at times my art is simply personal therapy. I am, however, often fascinated by the creative process itself and often less concerned with the “product” though I have a measure of pride with regards to many things I have produced, and feel a sense of satisfaction when people respond to my work.

When I chose to pursue writing as a career at age 30 it was with a sense of calling attached. As a result I felt that I had to discipline myself to excel at it. I took my writing very seriously. (I took my art seriously when in college.) It was the combination of writing and this creative urge that led to a career in advertising, a career that provided for my family.

What do you have coming up?

As I write this it is Duluth Dylan Fest, an eight-day celebration that involves music, art, poetry and more. It has been a major undertaking for the past six months. The next big art event will be the Fall Goin’ Postal art bonanza, which is expanding into as many as seven or more locations in Superior in early October. The semi-annual Goin’ Postal shows have been a useful prod to keep me producing new work. No one wants to just make crap to say they did it, so you set the bar high and produce new things you are proud of. That’s what I’ve tried to do with my blog (set the bar high and keep aiming high) and that’s what I try to do with my art.

When I was in college I adopted the attitude that whatever I was working on today should be the best and most important thing I’ve ever done. That’s not my attitude anymore because it is simply too much pressure, squeezing the joy of creation out of one’s work. It’s O.K. to make art for different purposes. Not every Picasso painting was a Guernica.

The new issue of Freshwater Review has been published

The new issue of Freshwater Review has been published. It is the College of St. Scholastica's student-run annual journal of literature...