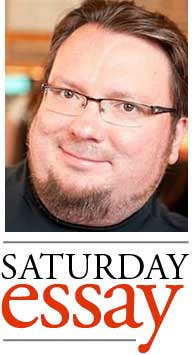 The house was built before the end of World War I, finished room by room by my great grandfather after a hard day’s work at Kurth Malting in Milwaukee, where I grew up.

When was a child at the kitchen table doing homework in the 1980s, the house still wasn’t finished. The porch was sinking into the earth, and every spring I climbed beneath to crank the jack that lifted the sagging southwest corner.

Every day his wife, my great-grandmother, fetched a can of veggies from the root cellar for dinner. Tinned vegetables did not require the cool air of the basement to stay fresh, but old habits died hard. Cans of beets and corn and beans were still stored downstairs.

At age seventy, she lost her balance from the third stair. There were no handrails to clutch or grasp as she flailed and fell. Her bones were brittle with age; the fall broke her wrists.

Pins were required to pull her bones back together, and her wrists healed. But the doctors left the pins inside her, surgery to remove them being too risky for a woman her age.

A handrail appeared soon after, but my great grandmother never took those stairs again. 508 E. North Ave., as built in large part by the labor and sacrifice of Michael Bertling and Regina (Budzisz) Bertling