Postcard from the Hotel Duluth in 1942 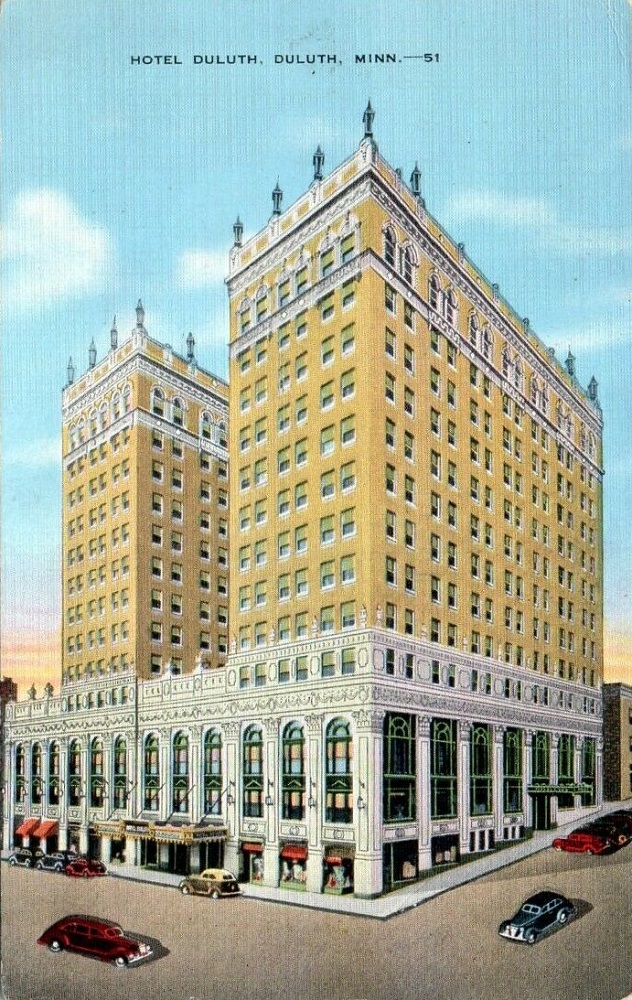 This postcard was mailed 80 years ago today — May 12, 1942. The recipient was Constance Jarvis of Riverside, Calif. Ray Boyer sent it from Duluth.

Video: Logan Moniot dances it up in the Greysolon Ballroom

Dancer Logan Moniot is featured in this video shot in Duluth’s Greysolon Ballroom by Jasper Meddock Productions. The song is “Bruises,” by Lewis Capaldi.

[Editor’s note: This week we’ve pulled out another relic from the archive of Slim Goodbuzz, who served as Duluth’s connoisseur of drinking establishments from 1999 to 2009. In this essay we travel back ten years to a time before Duluth’s Black Water Lounge existed. A restaurant called the Chinese Garden occupied that part of the Greysolon Plaza, and our inebriated anti-hero paid a visit. This article was originally published in the June 30, 2008 issue of the Transistor.]

If there’s one thing I hate about being sober it’s how polite I become. Here I am, standing next to the cash register at the Chinese Garden, waiting for a fucken waitress to come over and choose a table for me. This wouldn’t happen if I were drunk.

Obviously, if had any spirits in me at all, my choice would be to flop into the closest available booth, even if someone else is sitting there. Tonight, that would mean interrupting what appears to be a magic night of romance for a pair of chubby 60-year-olds who are silently finishing their dinner.

The man, whose grey hair is pulled back into a ponytail, breaks their conversational lull by asking the woman, “So, are we going to stay here and drink all night?” Lark o’ the Lake Café is an eatery with an unusual secondary purpose: to promote aviation education. “The Lark,” as it’s more commonly known, celebrated a year in business last month.

Sandra Ettestad, Mark Marino and Don Monaco own the restaurant at 231 E. Superior St. in the Greysolon Plaza. All three are trustees of the Duluth Aviation Institute and founders of its Gilruth Continuum Path to Aviation program. “The menu includes coffee and espresso drinks, smoothies, pastries, deli sandwiches, soups, salads and old-fashioned ice cream desserts,” the DNT article notes. “Prices are affordable, with most lunches less than $10. The cafe has Wi-Fi and is close to getting a wine and beer license.”

Duluth News Tribune: Lark Café opens at Greysolon Plaza in Duluth with a focus on aviation At about 8:15 p.m. the front awning of the Greysolon Plaza collapsed, presumably from the weight of snow. There are no reports of injuries.

A woman I know from my hometown is an alumnus of UMD, and said that while she was in school UMD had the same overcrowding problem that it has now. Instead of housing students at Edgewater, they housed them at the Greysolon Plaza. She also said that there was an elevator accident in which some UMD students were killed. I can’t find this information anywhere online, can anyone confirm that this actually happened? What’s with the cute little curtains at Romano’s Grocery?

Romano’s, 231 E. Superior St., has been transformed into Jacqui’s Deli, Grocery and Gifts. Homemade soups and sandwiches is the focus.