Liquor is legal in Lakeside. Who will serve it?

It’s as clear as 100-proof vodka that the first bar in the long-temperate Lakeside neighborhood of Duluth will be located on East Superior Street. The commercial corridor bends almost three miles from Northland Country Club to the Lester River. The road cuts through the heart of a bedroom community that includes close to 10,000 residents. It’s a neighborhood that has never seen a neon Leinenkugel sign or heard a last call.

“It’s a new frontier for an entrepreneur,” said Duluth Chamber of Commerce President and CEO David Ross. “It’s an unplowed field that’s sure to produce a good crop.” 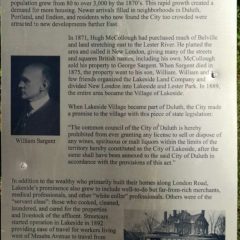 A plaque on the Duluth Lakewalk at 44th Street E. summarizes the Lakeside neighborhood history, including its recently overturned 19th Century liquor laws.

For residents, a cold drink could soon be as close as a five-minute walk. Existing food establishments can now increase their offerings and consider an expansion; and new businesses possibilities exist.

“It’s the land of opportunity. The first person to act on it will be the beneficiary,” said Ross. “Be the first one there and meet the need and fend off those that are thinking about doing something just like it.”

Of course, like a good small-batch whiskey, liquor licenses are not cheap or easy to acquire in any neighborhood.

One of the first steps in landing a liquor license is to secure an address. Duluth City Clerk Jeff Cox said applicants must have ownership or legal control of a building before than can apply for a license.

“They can’t just come in and say, ‘I don’t know where I’m going to go but I want a license.’ They need to have a location and an address,” said Cox.

There are as many location restrictions for any liquor license. Proximity to parks or schools, parking availability, zoning requirements, all would need to be addressed with the city planning department.

“It’s not exactly crystal clear in some areas of town, but in Lakeside there is a real limited corridor,” said Cox. “It’s basically Superior Street.” Applicants must appear before the Duluth Alcohol, Gambling & Tobacco Commission, which serves as an advisory body for the city council. Final approval for an on-sale license comes from the city council. Off-sale liquor store licenses must go through an additional step at the state level.

Then there is the cost. An annual on-sale liquor license in Duluth costs approximately $4,000. Bar or tavern owners would need to pay additional licensing costs for expansion into wine sales or larger infrastructure. Grandma’s Saloon & Grill in Canal Park, for example, carries a license for both its upstairs and downstairs bars. Extra permits and fees are also needed if the establishment plans entertainment, brewing equipment, even video games.

An annual off-sale liquor license costs approximately $1,500. State law limits a legal entity to one off-sale liquor license per jurisdiction — like the city of Duluth. Cox said Super One Foods as its own entity would not be eligible for an off-sale license at its Lakeside store because it already holds a license in West Duluth. The store, which is owned by Miner’s Inc. of Hermantown, could file under another legal entity for application.

While Super One may be slowed by state rules, Cox said two existing Superior Street restaurants have inquired about on-sale licenses since Lakeside liquor restrictions were lifted this spring. 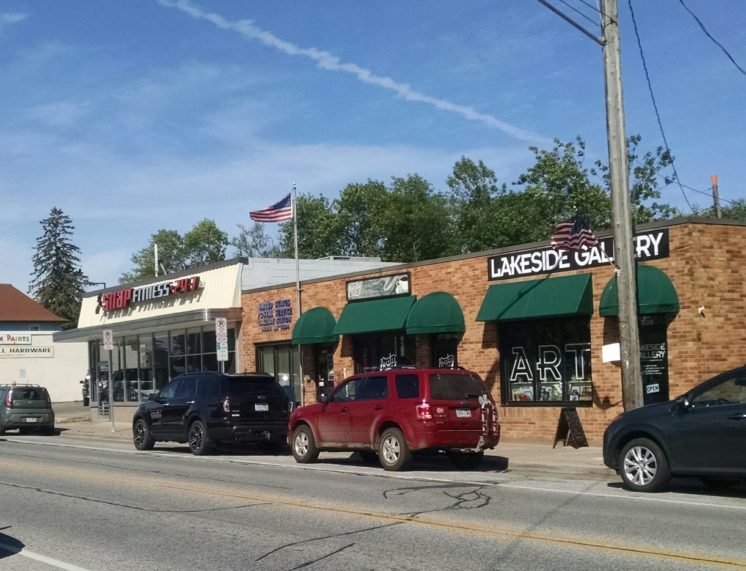 Amity Coffee, located between Lakeside Gallery and the Post Office, has applied for a Duluth liquor license and plans to sell bottled and canned beer.

Amity Coffee has applied for a Duluth liquor license and plans to sell bottles and cans of beer at its 4429 E. Superior Street location. The coffee shop hopes to eventually add tap beer to its offings.”We’ve filed all the paper work,” said manager Jordan Pykkonen. “It’s just a waiting game now.”

Cox said the city has not received inquiries or applications from any new businesses for liquor licensing.

Longtime Duluth bar developer and craft brewer Tim Nelson said Lakeside could use a neighborhood watering hole but didn’t know of anyone considering a project in the area. Yet.

Nelson, along with his brother Brad, brewer Dave Hoops and Paul Christensen in sales, have formed a new craft beer think-tank called Bev-Craft. The team plans to sell consulting and marketing services to craft brewers around the country. That would include anyone new to the business and wishing to start their own microbrewery in Duluth.

Nelson helped establish one of the first local craft breweries in Minnesota when he and then-partner Rod Raymond opened Fitger’s Brewhouse in 1995. The two went on to open four other pubs in Duluth over the next 20 years — all with a commitment to keeping it local.

Today, there are some 4,200 craft breweries throughout the United States and another 1,800 in development. Nelson said the secret to a successful neighborhood brew pub is simple: “They need a dedication to serving their communities one pint at a time over the bar top.”

“They will become an important part of the town,” he said. “It’s like every town needs a bakery.”

Nelson called Lakeside an “underserved market” but said it may not be big enough to support a large brewer. Something small and simple, however, might work on East Superior Street.

“It’s about time that those people could have a beer in their own neighborhood,” he said. “I think that’s great.”

This week, we profile the multi-talented Dave Kirwan, an illustrator, animator, designer and film buff. Dave talks about how he...