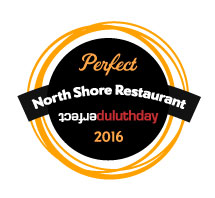 One conclusion can be easily drawn from the results of Perfect Duluth Day’s poll to name the best restaurant on Lake Superior’s North Shore: Grand Marais is the place to be. The top three restaurants are located there, including the perfect one, Gunflint Tavern.

Owner Jeff Gecas says it hasn’t always been easy. He and his wife Susan are “Deadheads” who decided to create the business “almost selfishly” in 1998 because there wasn’t anywhere to watch live music and drink microbrews on draft in Grand Marais. “We never had Bud or Miller Lite. We didn’t allow smoking. People said ‘They’ll never make it,'” Gecas remembers. “We’re now in our 19th year.”

Upending convention, the Tavern now offers music 260 nights a year and brews its own beer. With its eclectic menu, craft beer and live music several nights of the week, it has become a North Shore institution and a favorite among locals and tourists alike.

In an outpost like Grand Marais, one might be surprised to find bangers and mash, chicken mole and an Asian noodle bowl under the same roof. Casual fare like burgers and pizzas are available at the Gunflint Tavern too, as are finer dining options such as walleye, steak and mushroom ravioli. 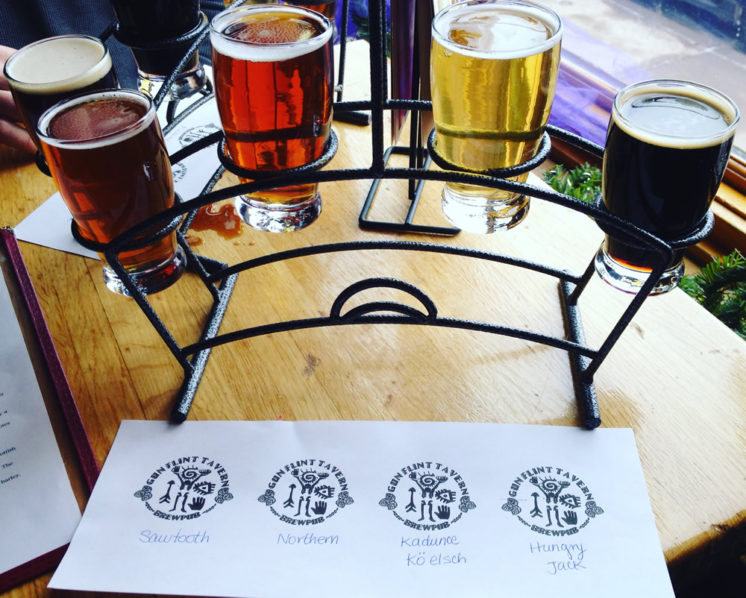 In late 2014, the Gunflint Tavern became the first brewery in Grand Marais (Voyageur Brewing Company would soon follow in March of 2015). The brewery has a 5-barrel system and produces six regular house beers. Patrons can also choose from an impressive menu of additional craft drafts and bottled beers.

The tavern is located at 111 W. Wisconsin St. in Grand Marais’ downtown. It’s open year round but summer is perhaps the best time to visit (if you can brave the crowds) to take full advantage of the Raven’s Nest rooftop deck. It’s hard to beat the experience of sipping a craft brew, Bloody Mary or glass of wine while gazing out at that stunning harbor view.

Gunflint Tavern garnered 35 percent of the vote among the final four. Angry Trout Café pulled 26 percent and Crooked Spoon was close behind at 22 percent. The Vanilla Bean in Two Harbors netted 17 percent.

It should be noted that New Scenic Café wasn’t included in this poll because the territory was limited to Lake and Cook Counties. Located in Duluth Township, the Scenic is the reigning Perfect Restaurant in the Duluth area.

On Saturday, July 16, our custom-made Cool Stuff Sale signs were stolen from Woodland Avenue and Oxford Street as our...