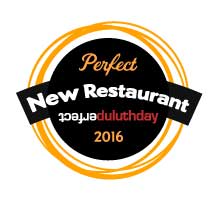 Northern Waters Smokehaus in the DeWitt-Seitz Markerplace has been a longtime local favorite. The sandwich shop and deli won the Perfect Lunch Restaurant poll in 2013 and earned national media attention from the Food Network’s Diners, Drive-ins and Dives and Men’s Journal. Proprietor Eric Goerdt has expanded upon the shop’s acclaimed smoked and cured meat and fish offerings with his new restaurant in the Chester Park – UMD neighborhood. Northern Waters offers a swanky dining atmosphere as well as wine pairings and a rotating selection of craft beer. Sandwiches are still available for lunch, with new takes on old favorites from the Smokehaus (the Cajun Finn is now the Royal Finn with lemon-caper cream sauce and pickled peppers from Peru). Finger-licking appetizers like wings and ribs are available on the bar menu and dinner fare includes items like salmon satay and Nicoise Salad with Lake Superior trout. The restaurant recently started serving brunch on weekends too. Also notable: Northern Waters is the first restaurant in the Twin Ports to institute a “no tipping” policy. Tax and tip are included in menu prices, which range from $10 for an appetizer to $25 for an upper-end entree.

The Zenith Quartette was a Dutch vocal group based in Duluth. Members shown in this old flier are Carl Hvaal,...