Since launching in May 2013, Bent Paddle Brewing has quickly become a dominant force in the region. The company seems to have everything right, from perfect beer to perfect packaging to perfect branding and distribution. From a 10,600-square-foot warehouse in Duluth’s Friendly West End, Bent Paddle already produces twice as many barrels of beer as any other local company — making it the most macro of the area’s microbreweries and brewpubs. 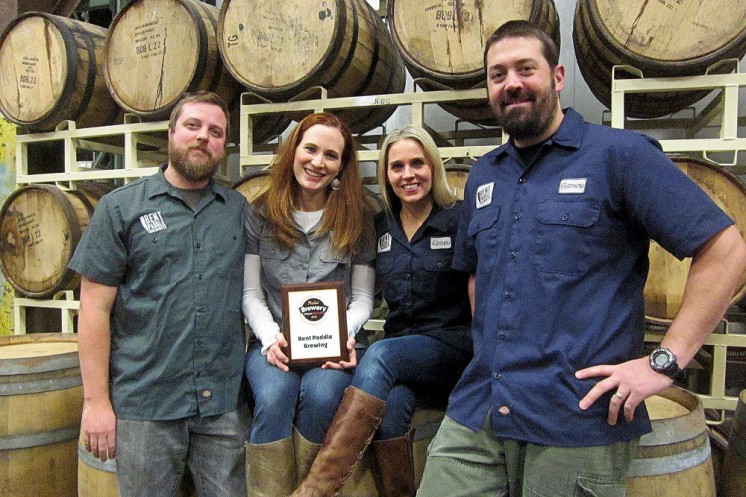 In the final round of Perfect Duluth Day’s poll, Bent Paddle went head-to-head with Fitger’s Brewhouse, a 19-year-old jauggernaut brewpub that supplies beer to five restaurants and a beer store owned by parent company Just Take Action. While the two companies have quite different operations and histories, both are well-known beyond Duluth for producing an array of outstanding craft brews. The nod to Bent Paddle, which amassed 60 percent of the vote, is perhaps due to its reach. Though the company is still fairly new, it’s beer is available in a majority of bar, restaurant and liquor stores in the Duluth market — and the territory has already begun to expand into the Twin Cities metro area.

Bent Paddle is owned by brewers Bryon Tonnis and Colin Mullen, and their wives Karen Tonnis, vice president of operations, and Laura Mullen, vice president of outreach and events. They spent nearly three years planning the launch of Bent Paddle. The brewing facilities at 1912 W. Michigan St. — a former rebar manufacturing plant — includes a tap room that sees its heaviest traffic on Thursday nights when local food trucks are parked outside.

There has been talk on PDD before about getting a Maker Space going, now it looks like there is some...