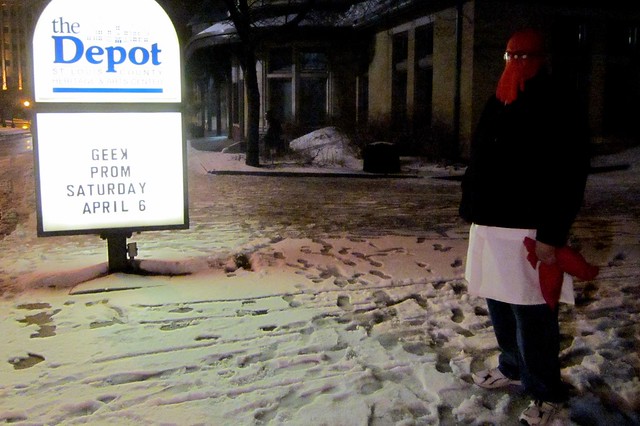 Some images in the slideshow are by Shannon Kinley; others are from Geek Prom’s Facebook page.

PDD intern Shannon Kinley takes us behind the scenes of Duluth events in this series of stories.

This past Saturday (April 6, 2013) adults were given the chance to blast into their pasts and attend prom. This was no regular prom though. Instead of people being dressed up in expensive gowns and tuxes they got to wear costumes such as Han Solo, Princess Leia or Dr. Zoidberg.

This year’s theme was “Talk Nerdy to me.” It was actually the very first event to be held in the new Underground space in the basement of the Depot.

According to Geek Prom’s website the event is a somewhat formal dance for adult misfits age 21 and older. The every-other-year gala features awkward romance, cheesy music and spastic fits of clumsy dancing.

The night not only had dancing, but featured many other nerd felt games and activities such as a Karaoke Gong show, Geek Dating Game, Spaz Dance Competition, hand-holding booth and a coronation of King and Queen Geek at the end of the night.

This year there were 135 nerds in attendance. The new Queen Geek is Mandy Muellner, an operation room assistant and baker from Superior, Wis. The new King Geek is Dr. Jason Ford, a philosophy professor at the University of Minnesota Duluth.

Alison Klawiter, a member of the Geek Prom committee, thinks the event is good for anybody and everybody.

Klawiter would recommend the event to people who want to have a fun night not trying to be anybody but themselves.

“It is a great way to get out and socialize for people who are maybe not comfortable with other forms of socializing,” Klawiter said. “It is just kind of fun to have a good laugh at ourselves and our geekness. Let your geek flag fly.”

The first Geek Prom was held in 2002 at the NorShor Theatre in Duluth. Since then the prom has circulated to many different locations and was even in the Twin Cities for a couple of years.

Paul Lundgren, member of the Geek Prom committee, originally had the idea for an adult prom about 15 years ago after hearing many stories from people who didn’t get to attend their high school proms or had a miserable time at their prom.

“My friend Barrett Chase suggested that I invite circus geeks to liven things up and that led to the name ‘Geek Prom’ jumping into my head,” Lundgren said. “At that moment I knew that I was on to something.”

Lundgren said the event used to draw about 300 people, but it recent years that number has dropped.

“The original geeks are getting older. If it doesn’t catch on with a younger crowd soon we might be nearing the end of our run,” Lundgren said.

Crystal Pelkey, director of Geek Prom and Queen Geek in 2005, said she stepped up to be director of the event in fear that nobody else would.

“I know people really are fans of this event, and if somebody didn’t step up it wouldn’t happen,” Pelkey said. “I felt it was very important that it happened, based on how people responded to the event.”

Pelkey and a group of her friends actually put on another event called “Nerd Night” that happens monthly. At this event people do a presentation on something they are self-claimed experts at.

Pelkey, even though somewhat biased, strongly recommends this event to fellow Duluthians.

“There is no other event like it in the country,” Pelkey said. “People always have a good time, and you don’t really know what to expect until you get here.”

Christine Dean, member of the Geek Prom Committee, has been involved with Geek Prom since it started back in 2002.

Dean’s favorite part of the event is seeing everyone’s costumes and the Spaz Dance Competition. She also really likes the dancing turkey trophies that are given to the Spaz Dance winners.

“It is a chance to let your geek flag fly and just be your geeky self with other people who are being their geeky selves,” Dean said.

“It is always fun to try new things and see how they go over,” Dean said.

A lot of times people will be surprised with who shows up to this event.

“It is surprising because there are people who manage to pass as not geeky out in the real world, but turn out to be really geeky,” Dean said. Lu and Dana Mjelde have been to the Geek Prom four times. This year Lu came dressed as Tank Girl and Dana wore a tuxedo. In past years they have come dressed as a Boy Scout and Girl Scout.

“I am just too lazy to make a costume and I had this in my closet,” Dana said.

Dana’s favorite part of the prom is the famous Geek Streak that has happened in previous years. He actually participated in the streak one of the years Geek Prom was held in the Twin Cities.

“It was the year we didn’t get arrested and pepper sprayed,” Dana said.

Lu’s favorite part of the prom is the Spaz Dance Competition, because she just likes to dance, but she also won the talent competition at one Geek Prom. Her talent was singing like a chipmunk.

Lu and Dana plan to keep coming back to see what Geek Prom has to offer every other year.

“It is kind of a tradition now,” Lu said. This was Nicole and Nate Lindstrom’s first Geek prom. Nicole came dressed as Princess Leia and Nate as Han Solo.

“We have wanted to go for a long time, but we were never really able to go due to scheduling,” Nicole said.

Nicole said her costume took her about a week to make, but Nate’s on the other hand took a couple months.

“I started a couple months in advance in anticipation and excitement for the event,” Nate said.

Both Nicole and Nate have attended Nerd Nights and thought that since they enjoyed that event so much, that this one was probably good too.

“I would recommend it (Geek Prom) even though I haven’t been there before. If it is anything like the Nerd Nights I think we are good,” Nate said. Heidi Abrahamson and Ben Ahlberg came dressed as a very old fashioned bride and her nerdy husband. This was both of their first times attending Geek Prom.

“We heard about it on the radio,” Ahlberg said. “We are fun loving, adventurous and geeky.”

Abrahamson explained that the two were originally just going to come dressed as “cute little nerds”, but when they were at the checkout at Goodwill the wedding dress caught her eye.

“It was really funny because the cashier actually thought we were getting married tomorrow (instead of attending Geek Prom),” Abrahamson said.

This will be the first prom that Heidi and Ben get to attend, because they did not date in high school.

“It will be fun just to be us and not have to be all graceful,” Abrahamson said. “We can actually step on each other’s toes when we are dancing.”

Cooking on the Car: Jiffy Pop for Beer Cheese Soup

https://www.youtube.com/watch?v=3Etpkyrwc0w The Beer Cheese soup is simmering in the glove box slow cooker and the bean dip is warming on...