The cute falls and river here empty into Lake Superior like so many sites along the South Shore: sandy beach, smooth stones, jumbles of fallen half-drowned trees. Depth off shore reaches thirty feet with a sand floor, on the edge of a rock shelf plunging 200 feet.

Statement of first responder on presumed drowning death of Matthew Bruin, 19: “This is not the first drowning victim of the Presque Isle River. It’s important to remember while splashing around in this shallow area by the mouth, that the seabed quickly descends to a couple hundred feet. The warm river water flows over top of the colder lake water, but it’s a conveyor belt to the deep. As the river water cools it sinks, pulling people down. Sadly I think the victim’s body will never be recovered. People say, ‘It’s the Presque Isle monster’ or ‘it’s a sea serpent’, but it is the lake itself, a force of nature that does not care if we live or die.”

Victim’s friend and witness, J.R. Sandvik: “I’m telling you he was pulled under by a large animal… I miss him… I miss you buddy.”

“It was a dive stunt. Scuba across the mouth of the forty-foot-deep Duluth Ship Canal. Where the St. Louis River discharges into the big lake, and the lake pushes back. The force of the turbulent current has swallowed people. Still we thought it could be done with scuba. We swam up to the edge of it and hammered a four-foot rebar spike into the sand, attaching the ends of our spools of guide line. So if we got swept out to sea — or sucked into the harbor — we wouldn’t get lost. We should be able to pull our way back to that point just off the edge of the mouth. It would be wild. We were going to push ourselves into the torrent of the St. Louis River and ride it as best we could, and whoever reached the other side of the canal owed the other one a case of beer. Crazy stupid idea.

“The canal is an industrial-sized structure like diving by a monument of a sunken continent. Thick sheets of iron in interlocking corrugations, driven into the sand by piledrivers and capped with concrete. The walls of the canal jam into Lake Superior as if engineered by giants.

“Outside the great wall of the canal, we swam over the sand through perfect visibility forty feet deep, lacy light bands on our bodies from the day above. But at the canal’s mouth, a wall of brown silt pushed miles out into the open water, an underwater river within the lake. Whorls and eddies sprouted along its length into the distance. To swim across the breadth of it, we’d have to enter zero-visibility like a zone of night. We readied our nerve and kicked into the gloom.

“In addition to the clicking sound of our guide line reels unwinding, I heard a thrumming sound, a guttural vibration I associated with an outboard motor sputtering on its way to starting up. We had timed our stunt to miss any cargo ship traffic. This sound was more like a pick of bone strumming thick tendons. It was biological and contained menace.

“Something heavy and fast bumped against me, at first I thought maybe it was a dead tree pushed by the current. Whatever it was grabbed my buddy and ran with him. I heard his guide reel spinning fast before it silenced. Our stake was dislodged, jerked from the lake bottom like a rod from the hands of an angler. My skin had been pierced, stabbed leaving a searing puncture wound. We had cast ourselves into the stream like bait. Fuck I miss you man, I feel terrible. [Cries.]”

Transcript of hospital interview with patient Drake Monroe, through the speaker of the barometric chamber at St. Luke’s Hospital: “Three miles from shore between the water intake pipes for Duluth and Superior. Hardy mans the boat while Johnson and I go backward into the sea with our technical diving gear. Depth of 125 feet attained, investigating a field of the toxic waste barrels dumped in the WWII era by Honeywell which spans into the distance in the light of our dive lights, revealing bottom muck stirred up into a cloud, suspended over and among the barrels like an animated fog sloshing around. Our lights playing on the suspended haze tricked me into detecting a hint of phosphorescence. Each barrel is lined with concrete and filled either with bomb parts or chemical waste. Each weighs up to 600 pounds.

“Using side frog-kicks to avoid stirring up the sediments even more, we documented that you can see concrete through the rusted out weak spots of many barrels. Each one is evidence of corporate criminality which we systematically catalogued against the metrics on our underwater clipboards. Perversely a fish habitat, we saw several species darting in and around the barrels like it was a weird reef. We were really just getting started when we had to wrap it up for a long, slow ascent with many decompression stops. But we decided to catalog just five more barrels. I was a dozen feet from him as we coordinated our activity using dive signals and writing pads. 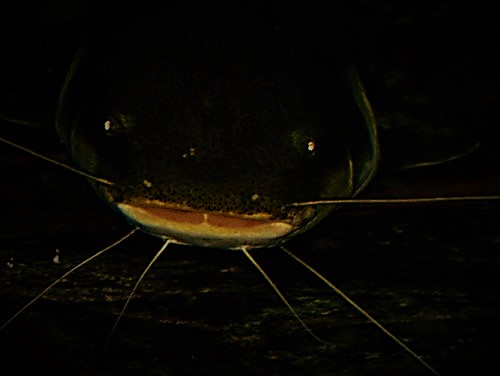 An 18-foot catfish emerged from the silt cloud

“I was astonished and became petrified as an 18-foot catfish — the thing looked big as a limousine — emerged from the silt cloud behind Johnson. Its dorsal spines erected with a low thrum as the tendons snapped the bones into place, a subsonic designed as if by a demiurge to terrify prey into inaction. It opened its wide flat mouth, and the act of its opening violently sucked in a large volume of water. Johnson’s legs were sucked in up to his waist, like a frog held fast by the creature’s incurving teeth. Our eyes locked wide in shock and terror. The fish gulped and Johnson disappeared into its belly, only his hand sticking out between the pale rubbery lips, dropping his clipboard which fell among the barrels like an autumn leaf fluttering into a graveyard. The last thing he’d written: ‘Almost done.’ With a little slurp Johnson’s hand disappeared into the gullet like the end of a piece of spaghetti.

“The mottled green, scaleless fish flexed its fins to turn and come about, their spiny tips secreting venom. Its mucusy flesh was a sense organ tasting its environment. It must have developed a taste for the prey around the barrels, chemicals altering its endocrine system and growth rate. Now it homed in on me. Its four-foot whiskers trailed through the muck of the barrel field like it was licking a battery, leaving a wake of twisting contrails. The fish had a six-foot lamprey on its side with the diameter of a rolled-up carpet. I skyrocketed to the surface and I am recovering from the bends in this barometric chamber, although it is likely I will suffer lifelong health effects.”

Interviewer: “A team went back with spearguns but all they found were Johnson’s scuba tanks.”

Monroe: “Regurgitated like indigestible bones. This Lake Superior specimen must be related to the goonch of India which eats grown men. There is also the lore of man-eating catfish from the days of Medieval Europe. I have been contacted by a prominent nature documentary series to tell my story. The producers settled on calling it the Gitchee Gumee Goonch.”

From the autopsy report on patient Drake Monroe: “Patient died of cerebral edema related to decompression sickness. The water on his brain affected his mental stability and he died ranting and raving about sea monsters. He confided in me in his final moments that he believes Johnson’s dry-suit and air tanks may have enabled him to survive constricted in the creature’s stomach like an ersatz womb. From lips to stomach would have been a tight squeeze and so may have torn his mask and airtanks off and so forth. In which case he would have been unconscious and dead within two or three minutes. But it’s possible he was swallowed with his scuba rig intact. Unable to move an inch, and bombarded by rows of gastric glands in the mucosal folds of the muscular stomach walls, Johnson could have lived for up to two hours. Finally his air ran out. Hours after that in the belly of the beast, through the bite wounds, the space age materials of the dry-suit were compromised by the acids, and ground apart by the chewing action of rocky gastroliths. This allowed digestion of the fetal corpse.”

Postcard of a Night Scene in Duluth

This postcard was mailed Aug. 14, 1941. It shows the Aerial Lift Bridge and western Downtown Duluth buildings in the...