Back before the pandemic, when sharing germs was cool, human beings gathered around buffets of food and troughs of alcohol. It was a simpler time.

A meme in my Facebook feed a few months back featured a blurry image of someone pouring Hawaiian Punch into a cooler with chunks of fruit floating in it. In the background of the photo were various bottles of booze. I instantly recognized what was happening; someone was mixing up a wop.

But the caption on top of the image read: “This is what a WAP was back in the day …”

A wap? As in, rhymes with snap? What the hell is that? And why is it capitalized? Is it an acronym? Wild Ass Punch?

Don’t overthink it. This awful group-cocktail-in-a-bucket idea is worthy of the poorly crafted meme that celebrates it. 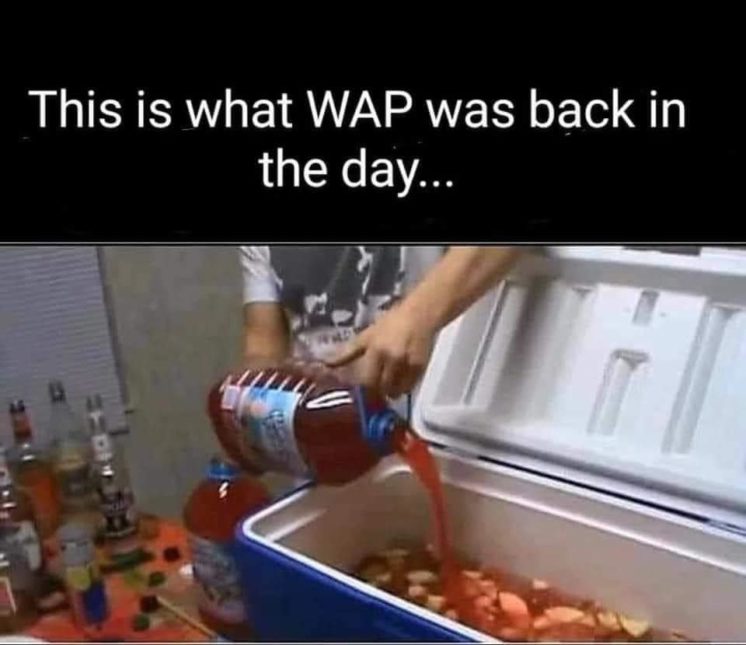 I’m going to go ahead and insist, however, that the proper term is “wop” and rhymes with slop, even though nothing is really official in the realm of slap-together bulk alcohol concoctions. Since “wop” also happens to be a derogatory term for people of Italian descent, maybe it got canceled into “wap.” Whatever.

It’s supposed to be short for “wopatusi” in my experience, although it appears as “wopatui” in the Urban Dictionary. The crowdsourced online glossary of slang terms offers a definition and sample sentence.

Wopatui
A mixture of a hard liquor, usually Vodka, and a mix of a fruit drink such as Kool-Aid or Hawaiian Punch. Usually the drink has a high concentration of alcohol.

Are you coming to the party, there’s a keg and Wopatui?

Again, I have to critique the writer and note there is no reason to capitalize “vodka” or “wopatui,” and fusing a question and a statement into a single sentence is weird, but we gave drunks the keys to the internet long ago so I’ll try to get over it. An examination of the substance of that definition, however, must be undertaken. As any enthusiast knows, the simple mixing of a fruit drink with some booze is not a wop. Sliced fruit is the critical ingredient. The fruit drink isn’t even necessary. If all you have is Hawaiian Punch and vodka, that’s a low-budget cocktail and nothing more.

Also, it’s not just a “mixture.” It needs to be produced in abundance to be wop. The meme shows it in a cooler. A 40-gallon garbage can is also common. For those with more elegant tastes, a clawfoot bathtub makes a classy wop dispenser.

I think the most worthy receptacle, however, might be a toilet. That isn’t to say a wop tastes bad. It’s basically like drinking fruit punch. But the copious amount of alcohol, suppressed in the highly acidic sugar bath, never fails to creep up on the unsuspecting imbiber even though everyone knows it will happen and openly talks about it in advance.

Therein lies the gender identity conflict of the wop. It looks like a so-called “girly drink” but is so booze loaded it rivals most tranquilizers in its ability to incapacitate. The most masculine heavyweights can, in minutes, go from loud-and-jovial to soiling their pants and passing out in poison ivy.

And that’s what people really crave when it comes to this communal dip-and-sip of sticky alcohol soup. No one is truly thirsty for a wop, but we all thirst for the occasional night of epic embarrassment that comes from mixing prodigous quantities of liquor with something one might ordinarily serve to a child.

As for the “wopatusi” vs. “wopatui” debate, I’m not going to take a side since there isn’t really a written record to point to for proof. Apparently in some regions, or maybe among people younger than me, it’s also known as “jungle juice.” To each their own on that one. The concept of a wop comes from an era when no one sent out an email or printed invitations for a shitshow, so etymologists might be at a loss to drill down its origin story.

A wop was an affair always hosted by someone with a nickname, and being invited just meant knowing it was happening, which was always learned in conversation peppered with swear words.

“Did you fucken hear Alice the Goon is throwing a wop on Saturday?”

“Fucken Shittooth gonna be there?”

“Why, you gonna kick his fucken ass again?”

Also note that a wop isn’t made, it’s thrown. The wop is both a drink and a party. Therefore, you should never refer to a “wop party,” because that would be redundant.

Although I repeatedly insinuate that throwing a wop is absolutely a lower-class activity, it should be noted that not all wops are created equal. They tend to be very different because they are almost always mixed as a collaboration between anyone who brings booze or fruit to the event, therefore the variety of ingredients can be pretty broad. A video on TikTok shows gummy-worm candies in the concoction. I wouldn’t classify that as a wop, though. Let’s call it a gop.

Anyway, the combination of things people put in a wop can have results ranging from a sort-of-tasty type of gross to totally gross.

On the Facebook thread where I saw the meme, my friend Heiko chimed in with advice. Of course, we have to call him “Heiko,” because plain old Eric Edwardson is a mere mortal who has no authority to throw a wop, but fucken Heiko rulz da wop.

“Grapes are the best,” sayeth Heiko. “They sink to the bottom and soak up the booze.”

There is a tendency at a wop for bozos to toss any old thing into the concoction. This, as Heiko notes, can get disgusting quickly. Slice up a banana in that bucket and it’ll look like bloody diarrhea. So, even though there is kind of an anything-goes spirit to a wop, a little attention to detail helps make it the highly drinkable nightmare you want it to be. Screw it up and people will opt for beer instead and maybe not end up passing out face down in the crick before sunset like you probably want them to.

Heiko’s recommendations: Use clear liquors. Nothing flavored. No gin. Mostly stick to citrus fruits. The enzymatic browning of apples, for example, is unappealing.

His recipe begins with vodka, white rum and a rectified spirit such as Everclear. “Add grapes and citrus — oranges, lemons, limes — then hold up on the fruit for a bit … stir and let sit for a bit.” The patience to let something like that “sit for a bit” is a little contrary to the spirit of a wop, but please, just let the expert do his thing.

Next Heiko adds Hawaiian Punch, pineapple juice and red Gatoraid. Stir it up, let it sit for a bit again, then taste.

Having made his demands, Heiko concludes by suggesting that you “see where it is.” From here on out it’s up to you. “Maybe add some orange juice?” he suggests in the form of a question. “Maybe more fruit punch? Up to you, but here is the important part at this time: pineapple and strawberries. Add them 15 minutes before friends start showing up, otherwise they get gross. Stir and set aside some pedialyte for the next morning. Now you can drink.”

Wops tend to be a summer thing. You can host one indoors, but that’s just telling the world you don’t mind a lot of colorful vomit stains on your carpeting. The beach, the quarry and on a pontoon boat are recommended venues. They are all good places to die.

Please don’t invite me to your wop; I graduated to glögg many years ago.